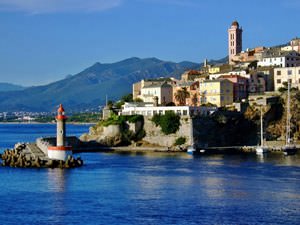 Bastia is a charming and cozy town, all landmarks of which are possible to see within one day. The central square of the town, St. Nicolas, is the best place to start the observation of the city because several beautiful streets and avenues start from this square. There are also several important religious landmarks nearby, namely, Oratoire de l'Immaculée Conception and Oratoire St Roch that were constructed at the beginning of the 17th century. During their long history, elegant chapels witnessed many important historical events. They are also among the oldest buildings in Bastia.
Cuisine of Bastia for gourmet with top restaurants and cafe
National cuisine restaurants offer a range of interesting meat and vegetable dishes. Local chefs cook true masterpieces from fruits of the sea. As a dessert, people of Bastia prefer not …

Open
The grandiose and gorgeous building of Saint-Jean-Baptiste Church also never ceases to amaze visitors. The construction of the church was finished in 1636. Later, the church was rebuilt and restored a number of times. Nowadays, guests of the town can admire the fabulous building in Rococo style. The church was restored in the 18th century for the last time. Saint-Jean-Baptiste is located in the heart of the historical district of the town. The church is surrounded by numerous attractive streets that also have many unique architectural landmarks. During a walk there, tourists will be able to admire the magnificent Governor’s Palace that was built in the 14th century, attend the Ethnographic Museum or explore one more important religious landmark – St Charles Church.
The building of the Ethnographic Museum itself is an important landmark thanks to its skillfully made façade and balconies. The building was damaged significantly during the World War II, but thanks to efforts of architects and builders it was completely restored. The charming St Marie Church is located not far from the museum. Constructed in 1458, for more than two hundred years it was the main cathedral in whole Corsica. In the 17th century, the church was almost completely rebuilt. Therefore, the church that tourists can see nowadays is not the original one, but it looks no less impressive. Copyright www.orangesmile.com
Authentic traditions, festivals and lifestyle of Bastia inhabitants
Local people are easy-going and laid-back. They are friendly and appreciate when others also treat them that way. Tourists in Bastia are recommended to stay calm and do not irritate when, …

Open
Just a short walk separates the ancient Oratoire-Sainte-Croix from St Marie Church. The look and inimitable design of this chapel are surely worth the attention of tourists. Vacationers should also not forget to stroll in the old part district and Terra Vecchia district. Besides numerous architectural landmarks, there are many interesting shops, restaurants, and cafes. Tourists, who want to explore more interesting places, may find it exciting to explore Bastia suburbs. This region has roughly three hundred ancient churches and temples, as well as many other important historical landmarks. 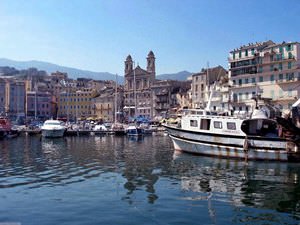 The old town or the “Terra Vecchia” and the Place du Marche are, without a doubt, among the most interesting parts of the town for tourists. While walking there and exploring magnificent churches in the area, visitors might recall Victor Hugo and his works – the famous writer lived in this part of Bastia when he was yet a child. Having explored the district, move to the old harbor. There are two main ports in the town. The new one regularly accepts Corsica Ferries with numerous passengers from France and Italy. The majority of French visitors come from Nice as this city has a convenient connection with Bastia. The old harbor, in its turn, is a place where both locals and tourists come to visit numerous cafes and bars or simply to make an evening stroll along the waterfront. The Quai des Martyrs de la Liberation offers the best view of the harbor, and so it’s a perfect spot for some memorable shots.
Your active city break in Bastia. Attractions, recreation and entertainment - best places to spend your day and night here
Located on the east coast of Corsica, Bastia is a true gem that is very interesting to explore despite the industrial appearance. Fans of Baroque heritage will definitely enjoy a stroll on …

Open
When it comes to museums, the History Museum of Bastia is the largest venue of its type that has prepared much interesting information for its guests. The museum has a permanent exhibition that is divided into three parts – intellectual and artistic heritage of the town, political and economic influence, and town planning. Bastia has a rich history as it was the capital of Genoese Corsica and played an important role in the 19th century. Guests interested in the historical look of the town will also like the Musee de la Miniature. The small museum exhibits a miniature village that looks incredibly detailed and attractive. 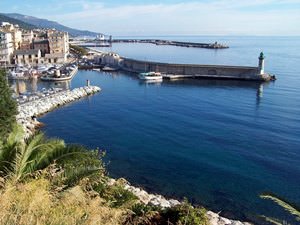 A walk along Le Vieux port will linger in the memory of everyone who decides to visit the city, for a long time. A pleasant breeze, the smell of the sea, ships swim off and sailing away, numerous restaurants and bars that are pleasing to the eye, all awaits those who decide to take a walk along the harbor. The place is striking in its romance, so a walk with your better half will be a two-fold present. Place Saint-Nicolas, on which the monument to the most famous native of Corsica – Napoleon – is installed, is another interesting attraction you should visit. It is worth mentioning that the great commander is depicted dressed in the robes of the Roman emperor. The area is surrounded by palm trees, restaurants, and cafes.
Bastia design-hotels for stylish travellers
Several popular hotels of Bastia differ with particularly amazing and attractive design, and a comfortable hotel Pietracap is among them. It’s located in Pietranera district, next to …

Open
There are many interesting natural attractions in Bastia. Near the city you can find a mountain range striking in its beauty. For lovers of ecotourism, such a holiday will seem magnificent. For this reason, it is worth going to conquer Glacières de Cardo. You can be sure that all your efforts will not be in vain – having passed through all the obstacles, you will be rewarded by stunning views with their beauty. Glacières de Cardo is a great place to take a walk, as well as see the panoramic views of Bastia located below, like a toy city. Nearby you can see several interesting stone buildings of ancient times and feel the atmosphere of history. 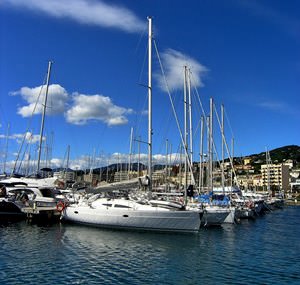 Among the museums in Bastia, you will be delighted to visit the Musée de Bastia, where you will be told about the history of the island. Exhibits here include portraits, storage chests, paintings, and furniture. The courtyard is so strikingly cozy and comfortable that it is super hard to refrain from walking here. The unique Musée de la Miniature is also situated here. Here you can see how medieval cities appear as if they are in your palm. For those who want to feel the soft breeze of history and enjoy the aesthetic views, do not fail to stop by the Palais des Gouverneurs. The palace was built in 1380 by decree of Leonello Lomellini, the governor. It is for this reason that the palace bears his name. By the way, it was this building that gave the name to the city, since the fortified structure was called “la Bastia”.
Old hotels keeping the history of Bastia
An important feature of the hotel infrastructure of Bastia is a variety of attractive hotels that have preserved the unique historic setting. An elegant 19th-century building houses Hotel …

Open
Among the religious monuments, you will find the Oratoire de la Confrérie de Sainte Croix. This church was built in 1543, and was originally part of the Basilique Saint-Jean-de-Latran. However, the building was later reconstructed in 1600 and it became private. The church was badly damaged during the battle in 1745, but was quickly restored. Prosper Merimee who visited the church in 1839, even wrote about it. Another sacral monument can be found, if very close by. We are referring to the Bastia Cathedral. This church strikes with its interior decoration and decorations – precisely with frescoes, an altar and a statue of the Virgin Mary. It was built in the 18th century.

In the section below, you can get one of our excursion, activities or city discovery tours over Bastia and surroundings. Our website offers 10-30% lower ticket prices, when compared to the offline purchase on the spot.

This guide to cultural sights Bastia is protected by the copyright law. You can re-publish this content with mandatory attribution: direct and active hyperlink to www.orangesmile.com.
Bastia - guide chapters 1 2 3 4 5 6 7 8
Reference information
Map of all churches

Cathedrals and basilicas near Bastia
♥   Ancienne cathédrale Saint-Erasme, Cervione, 41.4 km from the center. On the map

♥   Ancienne pro-cathédrale Saint-Jean-Baptiste, Calvi, 58.4 km from the center. On the map 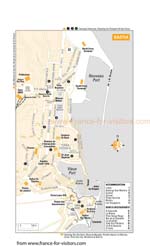 Photogallery of cultural heritage of Bastia

Excursions over cultural sights of neighbours of Bastia

Corse
In 1975, archaeologists discovered an interesting historical site, which was named Filitosa. Settlements of ancient people were located here in pre-historic era. Today the site is free to the public and is very popular among tourists. In the historic parkland you could see stone houses of local settlers, ancient fortifications and even carved stone statues that were erected by ... Open »
Elba Island
Despite their greatness, Medici’s shafts are not the oldest fortress on the island. Nobody knows when the Volterraio castle was built, but it is a fact that it has already been there in the 13th century, as in 1281 it was reconstructed. This powerful building had never been conquered by the Turkish. The defense system of the island included several watchtowers, built for ... Open »
Ajaccio
The Old Town part of the city has the greatest interest for tourists. Start your observation of the city’s points of interest from visiting Foch Square. The square is surrounded by beautiful old buildings. This place is genuinely liked by people who enjoy walking as picturesque cobbled streets are simply ideal for this kind of pastime. While walking through the square, you ... Open »
Livorno
Livorno's most valuable religious monument is the Cathedral of Livorno (Duomo di Livorno) built in the early 17th century. After the war, it was almost completely destroyed and lay in ruins. It took almost ten years to restore the city's main cathedral. It was possible to recreate not only old architectural elements but also unique artistic decorations. Visitors can see ... Open »
Pisa
Ingenious mosaics artistic finishing made of rare sorts of marble, handmade carvings and vast open terraces, antique statues and fresco paintings with images of saints are the articles of endless admiration of thousands of tourists. The Baptistry (Battistero di San Giovanni Battista) has a great historical and artistic value. The Baptistry is the largest religious building in ... Open »
Viareggio
Torre Matilda (Matilda Tower) is one more important historical monument of the city. The construction of the tower took place in the 16th century. This watchtower was a part of a complex of fortifications of the city. Observers used the tower to see approaching pirates. The tower changed its status in the 19th century. It was turned into a prison for some time. Nowadays the ... Open »

Culture guide to Bastia. Which fascinating sights to visit once you are in Bastia: temples, churches, museums, theaters and castles. Recommendations (with addresses, phone numbers and links) on the places 'must visit' in Bastia. Plan your own city excursion by using this page info!