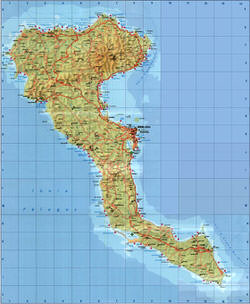 Interactive maps of hiking and biking routes around Corfu

1. You can zoom in/out using your mouse wheel, as well as move the map of Corfu with your mouse.
2. This interactive map presents two modes: 'Biking Routes' and 'Hiking Routes'. Use the '+' button on the map to switch between them.

This Corfu map has two modes: 'Railway Network' and 'Landscape & Rural Map'. Use the '+' button on the map to navigate.

Our guide to Corfu

This is one of the most popular and modern resorts that attracts its guests by magnificent landscapes, high level of service and wide choice of entertainments that are able to fit any taste and budget. On summer you will always see here numerous tourists including many people coming from our country. If you look at this place from high above, its shape will remind you a sickle. In different periods of Corfu’s … Open

Many interesting historical and religious sites have been preserved on the island, as well as unique archaeological and incredibly beautiful natural sites. Unique architectural and historical monuments can be admired literally in any local city. The ancient city of Corfu is considered to be the unique historical center founded in the 8th century BC. Now the entire territory of the city has the status of a World … Open

In addition to magnificent beaches, Corfu is ready to offer tourists a lot of opportunities for interesting entertainment. It has several excellent water parks, one of the best is Aqualand. This water park occupying the area is 75,000 square meters is one of the largest in Greece. Dozens of swimming pools are available here for holidaymakers, including special small pools for children with fountains and safe slides. … Open

Fish and seafood are often cooked over an open fire as well, which allows to keep the unique taste of products. Seafood lovers will have a chance to taste mixed plates, which include several types of fish, shrimps, squids, and octopuses. In Corfu restaurants, guests are also offered a rich selection of interesting salads and snacks, an important component of most of which is delicate cream feta cheese. It is … Open

Traditions and mentality of Corfu

Many experienced travelers believe that only on the islands one can feel the unique spirit of Greece. A very measured life reigns here, and unique national traditions can be seen in literally everything. Authentic architecture, unique culinary traditions, beautiful religious holidays and a measured lifestyle - the atmosphere on Corfu Island is so harmonious that after a couple of hours every tourist feels like a … Open

Walks through the main cities of Corfu can be diversified with an exciting trip to the Island of Ponticonisi, which is known under the unofficial name Mouse Island, by many travelers. This unusual name of the island was due to its miniature size. Its entire territory can be walked on foot in just a few minutes. On the island, there is a small old castle. It literally drowns in the abundance of trees and plants. … Open