Detailed hi-res maps of Orvieto for download or print 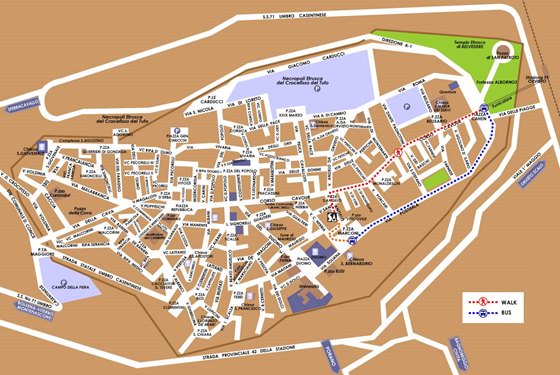 The actual dimensions of the Orvieto map are 1180 X 790 pixels, file size (in bytes) - 231354. You can open this downloadable and printable map of Orvieto by clicking on the map itself or via this link: Open the map. 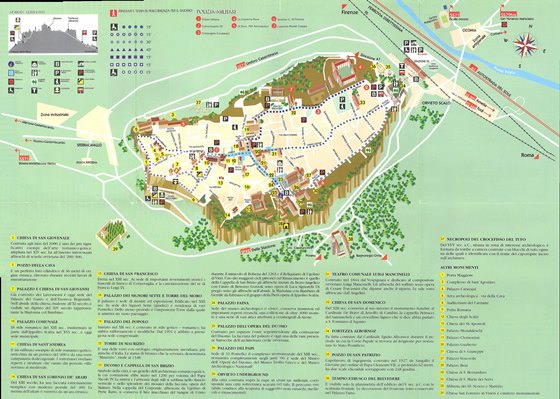 The actual dimensions of the Orvieto map are 2575 X 1836 pixels, file size (in bytes) - 1502813. You can open, download and print this detailed map of Orvieto by clicking on the map itself or via this link: Open the map. 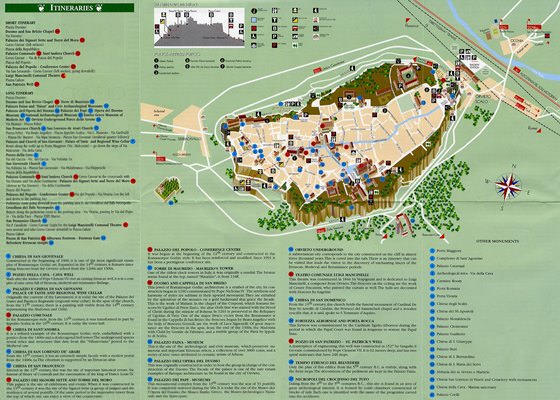 The actual dimensions of the Orvieto map are 2000 X 1430 pixels, file size (in bytes) - 917538. You can open this downloadable and printable map of Orvieto by clicking on the map itself or via this link: Open the map.

Search for services, infrastructure and sights on map of Orvieto

Our guide chapters over Orvieto

Every year, tourists coming in Orvieto have to walk roughly two hundred and fifty stairs to throw a coin to the legendary well. When standing on the bridge mentioned above, it is possible to see how the coins thrown by other visitors shine in the water. An interesting fact – if you look closely, you will notice that there are not only coins in the well but also mobile phones. It is a mystery why some tourists … Open

Maps of Perugia
One of the most waited Perugia holidays among foreign guests is the Eurochocolate Festival. The festival was first held in 1994. The sweet holiday takes place in October. For the last several years the festival has been visited by more than a million of foreign guests. The event engages more than 150 world renowned companies and chocolate producers. The main event of the ... Open »
Maps of Arezzo
Arezzo is a city with many interesting traditions and celebrations. It’s a fantastic place where tourists can see festivities that have appeared yet in the middle ages. Generations of local people have cherished traditions of their predecessors, so they try to follow all rituals and keep them unchanged for centuries. Giostra del Saracino or Joust of the Saracen is, without a ... Open »
Maps of Siena
The La Disfida della Valdelsa event, held in early June in the open-air museum of Parco Archeologico di Poggibonsi, is another interesting festival. The festival is a kind of “discovery” of the grand event Monteriggioni di Torri si Corona, but it offers an equally rich program. This includes knightly tournaments and buhurts, the reconstruction of the Battle of Colle di ... Open »
Maps of Rome
The most interesting national holiday is the Foundation Day, which is celebrated on April 21. This celebration has the tendency to stretch for several days. During the holiday, you will be able to enjoy a lot of interesting cultural events and rituals. Every year, locals choose the Goddess of Rome, which becomes the winner of the beauty contest. One of the main roles during the ... Open »
Maps of Tuscany
The festival starts on the last Friday of September and lasts for 7 days; local potters and blacksmiths, lace makers and wood carvers, goldsmiths and other craftsmen take part in the holiday. During the event, there is an interesting trade fair, where you can see the most interesting works of artisans and buy your favorite things. Everyone interested in learning the art of ... Open »
OrangeSmile.com - online travel reservation expert providing reliable car rental and hotel booking services. We feature more than 25.000 destinations with 12.000 rental offices and 200.000 hotels worldwide.
Secure Server