Detailed hi-res maps of Innsbruck for download or print 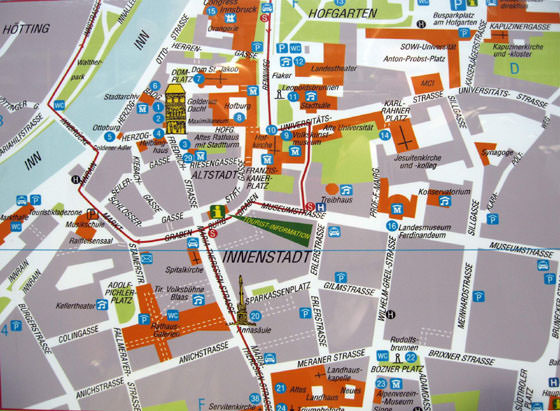 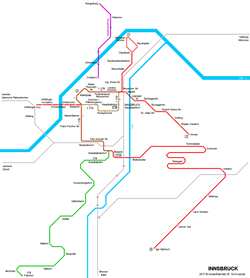 Search for services, infrastructure and sights on map of Innsbruck

Our guide chapters over Innsbruck

The luxurious Hotel Central is open in the central part of Innsbruck. Only several steps separate the hotel from ever crowded Maria-Theresien Street. Besides the signature style of the hotel, both public spaces and guestrooms have a wonderful décor made of wood. All guests of the hotel have a direct access to the high-class gym and sauna of Hotel Central. Fans of open-air activities can always sunbathe on one of the … Open

Innsbruck for children - what to visit

Innsbruck has always been a popular tourist destination for travelers with children. The famous alpine ski resort is widely visited all year round. Besides the above mentioned historic landmarks, the resort can be proud of its beautiful and interesting places that are worth a visit with children. Hofgarten Park is a great place for rest and various outdoor activities. The park is a wonderful place to visit regardless … Open

Kapeller Innsbruck is considered a paragon of modern style and elegance. The hotel is open in a beautiful building in the national style, inside which travelers will find comfortable rooms with décor made of mostly natural materials. All guest rooms feature a large bathroom made in shades of white, and some rooms have a Jacuzzi. Beautiful furniture made of premium sorts of wood and amazing hardwood floors are the … Open

The main shopping street of the city is the Maria Theresa Street, it is also a pedestrian street. Here it is worthwhile to go in search of stylish high-quality clothes and shoes, and on this street there are several prestigious shops of perfumery and jewelry salons. This street is perfectly equipped for walking, it has many convenient shops. In addition to shops, there are also popular restaurants, and in house … Open

Hotels with history of Innsbruck

Some hotels in Innsbruck have been greeting their guests for more than a hundred years, and so they’ve got a status of city’s landmarks. The prestigious BEST WESTERN Hotel Neue Post is one of them. This hotel is open in a beautiful building in the center of the city. The design of BEST WESTERN Hotel Neue Post is an amazing example of art nouveau style, and that is why many fans of architecture visit this … Open