Detailed hi-res maps of Vigo for download or print 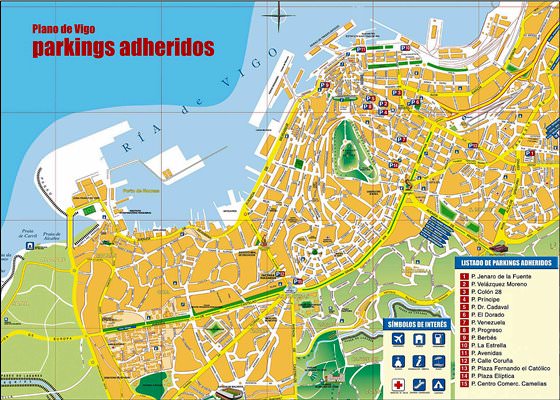 Search for services, infrastructure and sights on map of Vigo

Our guide chapters over Vigo

Santiago de Bembrive Church, which is located in the heart of the historic district of Vigo, is a no less interesting religious monument. The church, which travelers can see today, was built in the 13th century. Its facade is decorated with handmade carved patterns. The amazingly beautiful building has miraculously survived till our days in a great condition. The interior of the church is also of great interest. … Open

Fans of relaxed and intimate setting will surely fall in love with Argazada Beach. This is a perfect solution for family rest. The territory of the beach is equipped with several hills for skateboarders. You will also find several sports and beach equipment rental offices there. Near the beach is located a beautiful park, where visitors can get shelter from hot sun at any time of a day. This place will be also liked … Open

Traditions and mentality of Vigo

The main products in the city are, first and foremost, fish and seafood. In general, Vigo is considered one of the largest fishing ports in the whole of Spain. Pies with squid, clams, mussels, all sorts of fish - all these can be tried here. And they're definitely worth a try because this food can hardly be prepared better somewhere else. We cannot fail to note such national dishes as Pulpo a feira (sliced octopus … Open

Worthy competition for prestigious Vigo hotels is Eurostars Mar de Vigo. It is located a few steps from the coast and composes a single complex with a famous fitness center. Those who love to relax in an elegant setting can choose one of the superior luxury rooms with panoramic windows and a private terrace for their stay. The hotel NH Palacio de Vigo is pleasant in all aspects. Its customers get the … Open