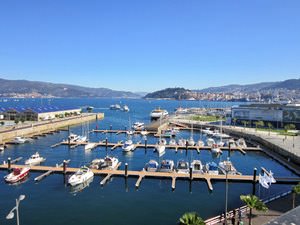 Start the observation of numerous sights of the city from visiting Bonin House. The beautiful mansion built in the beginning of the 20th-century is one of the most luxurious buildings of Vigo. The design of its facade is created by best masters, and in its inner premises simply every piece of furniture is a valuable museum item. Santa Maria Cathedral has been known as the main symbol of the city for many years. This is a beautiful building in Romanesque style. The first church on the site of the modern cathedral was built yet in the 13th century. Since that time the building has been repeatedly rebuilt and, thus, has completely changed its appearance. In 1940, during an extensive renovation, ancient frescoes were discovered in the church. Presumably, these frescoes decorated the walls of the first church.
Best hotel choice for romantic escape, wedding or honeymoon in Vigo
Some hotels in Vigo are notable for their special romantic atmosphere. Among such establishments is the prestigious Silken America Vigo, located not far from Plaza Compostela. From its cozy …

Open
Santiago de Bembrive Church, which is located in the heart of the historic district of Vigo, is a no less interesting religious monument. The church, which travelers can see today, was built in the 13th century. Its facade is decorated with handmade carved patterns. The amazingly beautiful building has miraculously survived till our days in a great condition. The interior of the church is also of great interest.
San Salvador Cathedral is one more striking monument of the early Middle Ages. The cathedral was built in the end of the 13th century. Previously, the church was a part of a complex of monastic buildings. This is the only building that has survived till our days. During a walk through Casco Velho district, which is considered the historical center of the city, you can see a lot of interesting buildings and monuments built during different periods. Here you will find beautiful houses of noble families. Excursions in the mansion of Mulder are particularly popular among foreign tourists. Copyright www.orangesmile.com
Shopping in Vigo - main shopping streets, outlets and boutiques
Shopping in Vigo promises to be incredibly fascinating since the city has plenty of colorful markets in addition to traditional shopping centers. One of the most picturesque is Mercado de la …

Open
The beautiful building is considered a great example of Spanish modernism. The construction of the mansion was completed in 1910. The facade of the original three-storey mansion is decorated with panels of colored ceramic plates. A visit to Garcia Borbon Theater should also be included in mandatory excursion program of foreign tourists. The building, which houses the theater, is considered one of the most beautiful ones in Vigo. Recent reconstruction of the building was completed in 1982. Today García Borbon is a major cultural center of the city. These are only several major attractions of Vigo, which are recommended for visiting by all visitors of this wonderful city.

In the section below, you can get one of our excursion, activities or city discovery tours over Vigo and surroundings. Our website offers 10-30% lower ticket prices, when compared to the offline purchase on the spot.

This guide to cultural sights Vigo is protected by the copyright law. You can re-publish this content with mandatory attribution: direct and active hyperlink to www.orangesmile.com.
Vigo - guide chapters 1 2 3 4 5 6 7 8 9 10 11
Reference information
Map of all palaces

Cathedrals and basilicas near Vigo
♥   Sé Catedral de Santa Maria, Braga, 79.7 km from the center. On the map

Spain is a culturally rich country. There are more than 40 objects of the UNESCO World Heritage List. The country was built and developed under the influence of three religious confessions - Christianity, Islam, and Judaism - which affected the material and spiritual culture. There is a large number of museums in Spain. The largest of them, the Prado Museum, is situated in Madrid. The building, in which it is located, was constructed in the 18th century. That’s a monument of classicism. The collection of the Museum of Fine Arts embraces pieces by El Greco, Velasquez, Bosch, Botticelli, Raphael, Titian, Bassano, and Rubens. The walls of the museum hold a unique collection, which is one of the 20 most visited in Europe. … Open

Photogallery of cultural heritage of Vigo

Excursions over cultural sights of neighbours of Vigo

Galicia
Fans of scenic walks have to visit the city of Vigo; it is the largest fishing port in the region. Foreign visitors would be fond of the historic center with its medieval buildings. Roman walls housing a lot of interesting sights can be called the main symbol of Lugo. One of the most beautiful buildings in the city is the Cathedral; this unique religious monument has managed ... Open »
Ourense
The old Town Hall building - Casa Do Concello - has been preserved in one of the city's main squares. It is noteworthy that the building is still used for its intended purpose, even though it has remained unchanged since 1888. Just like many years ago, the Town Hall houses government offices and hosts the most significant events for the city. It's not allowed to get inside ... Open »
Santiago de Compostela
Another remarkable architectural object of tourist interest is the Animas Chapel which construction was finished in 1784. The tourists should necessarily look into the chapel and estimate its marvelous inner decoration. The walls of this chapel keep various ancient icons, statues and several remarkable artifacts. The city also hosts one of the oldest educational institutions ... Open »
Braga
A part of the palace’s premises is occupied by the oldest library in Braga. It stores ancient manuscripts, many of which are important historical documents, and approximately three hundred thousand books. The age of many books is more than one hundred years. Of course, these are not all places of interest that are recommended for visiting. Among newer religious monuments ... Open »
Guimaraes
Religious attractions worth highlight include the Church of Saint Francisco (Sao Francisco Church), the construction of which was completed in 1400. The spectacular Gothic building was completely reconstructed in the 18th century and today appears before visitors in all its glory. Not far from the castle, old Rua de Santa Maria Street starts, walking along which you can reach ... Open »
Porto
Porto is also home to one of the most beautiful bridges in the country, which connects the city and Vila Nova de Gaia. An openwork arc, which length estimates 172 meters, was designed by the world-renowned engineer Eiffel. There is a special area for pedestrians on the bridge, so don’t forget to visit this place – a walk in this places will become a real pleasure. Fans of ... Open »

Culture guide to Vigo. Which fascinating sights to visit once you are in Vigo: temples, churches, museums, theaters and castles. Recommendations (with addresses, phone numbers and links) on the places 'must visit' in Vigo. Plan your own city excursion by using this page info!