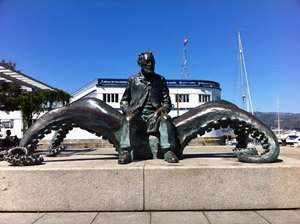 Vigo is a city where people are always ready to help tourists if they face any troubles. The fact is that they have long been used to many travelers visiting their hometown, so assisting them is a kind of common practice. Locals consider themselves to be descendants of the Celtic Gauls (the name of the region of Galicia speaks about this). By mentality, they are strikingly different from Spaniards who are traditionally associated with the hot temper. They are very proud of their roots, and every local resident would be happy to let you know this. Here it is believed that it was they or, more precisely, the famous Galician leader, who first discovered Ireland. No one can convince local people otherwise. By the way, the two nations share the common national instrument - bagpipes.
Advices to travellers: what you should know while being in Vigo
1. Travelers who plan to travel around the city a lot and visit numerous excursions are recommended to purchase a special tourist card. It entitles you to a reduced fare in public …

Open
Locals are proud and restrained, and it's not easy for them to ask for help - it’s quite difficult, because of natural haughtiness, of course. Women in Vigo are also strikingly different from the image of burning Spanish Carmen - they are self-sufficient and can do any men's work, if necessary. Native people do not rush into battle without thinking about the consequences like hot Spaniards. Unless their pride is hurt - that's when you can witness their emotionality. A local dialect is more like the language of neighboring Portugal, a kind of a mix of Spanish and Portuguese. This fact is very interesting for linguists who have always thought about what would happen if you mix these two languages.
The main products in the city are, first and foremost, fish and seafood. In general, Vigo is considered one of the largest fishing ports in the whole of Spain. Pies with squid, clams, mussels, all sorts of fish - all these can be tried here. And they're definitely worth a try because this food can hardly be prepared better somewhere else. We cannot fail to note such national dishes as Pulpo a feira (sliced octopus with potatoes) Cocido gallego (boiled meat with chorizo sausages, potatoes, and peas), Callos con garbanzos (rumen soup with chickpea), Mariscada (the dish from all sorts of seafood). Drinks worth trying include hot Queimada drink. Copyright www.orangesmile.com
Vigo design-hotels for stylish travellers
One of Vigo’s most fashionable designer hotels is the Hotel Ciudad de Vigo, located a couple of minutes’ walk from the waterfront. Its guests can pick from more than one hundred …

Open
In Vigo, holidays always attract the attention of the public, including the local media. The most remarkable festival in the city can be called Fiesta De La Reconquista annually celebrated at the end of March. The fact is that Vigo became the first city to become independent from France during Napoleon's reign. At this time, the city is immersed in the atmosphere of that era. In addition to the festively decorated city center, on the streets, there is an exact reproduction of the events of the past days when the Napoleonic army was expelled from the city. There are battles in which costumed peasants, fishermen, and craftsmen fight French soldiers - a truly fascinating spectacle. Besides the reconstruction, there is a fair where you can taste seafood and wine. 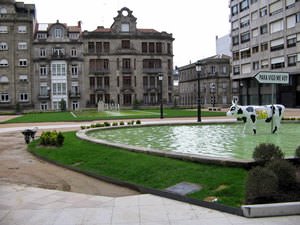 The same seafood is the "hero of the day" in mid-September when the annual Fiesta del Marisco takes place here. This is the biggest event of this kind in all of Galicia, if not in all of Spain since the country receives the lion's share of fish products from Vigo's port. A fair opens, music, and dance performances are organized during the festival. Children are not neglected here either - a program prepared specially for them include competitions and a playground.
Top places to stay in Vigo - most luxurious hotels
Among the most luxurious hotels in Vigo, the Gran Hotel Nagari Boutique & Spa deserves topmost priority. This chic spa hotel offers guests over sixty rooms with elite design and first-class …

Open
In addition to this seafood festival, in Vigo, you can visit Fiesta del Mejillón (early September), Fiesta de la Sardina (early August), as well as Fiesta de la Cocina Marinera (July). All the festivals have the same friendly atmosphere, for the sake of which you can choose any of them. Semana Grande that falls on mid-August can be called another holiday that would be interesting to many. This is the time of concerts, theatrical performances, and master classes - nobody wants to miss this kind of event. 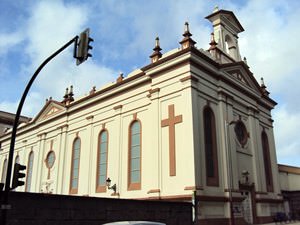 Aéreo Internacional de Vigo takes two months in July and August. At this time, beach air shows immerse spectators in an amazing atmosphere. The venue is Samil Beach. The show itself is very colorful, and more than 200,000 people visit it every year. This alone speaks loudly how spectacular the event is. Another fascinating festival is called Vigofolcelta Fiesta, during which the city turns into a real medieval town. It's all because of a medieval fair where you can buy a lot of interesting things. The festival has a Celtic focus.
Best hotel choice for romantic escape, wedding or honeymoon in Vigo
Some hotels in Vigo are notable for their special romantic atmosphere. Among such establishments is the prestigious Silken America Vigo, located not far from Plaza Compostela. From its cozy …

Open
If you're planning a visit to Vigo for early July, you should definitely witness Imaxina Sons festival where you can listen to high-quality music, which has already become a kind of classic - namely, jazz. The venues are many locations throughout the city, while the most large-scale actions take place in Teatro Afundación Vigo, Centro Cultural Caixanova, Verbum Jazz Cafe, and the Manteca Jazz Club. This is a great opportunity to discover new facets of music. Although there are typically no big names among headliners, you can always find something new. And it must be said that these new names are worth knowing. 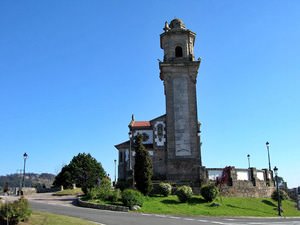 Fans of symphonic music meet between mid-October and mid-December at Are-More Music Festival. Without exaggeration, it is the largest festival of its kind in the entire region. Here you can listen not only to baroque music and opera but also to experimental music - "modernized classics". The festival is visited by more than 600,000 spectators every year. The event is international, which means that both visitors and participants come from all over the world. Several locations throughout the city serve as the venue.

This guide to traditions and festivals in Vigo is protected by the copyright law. You can re-publish this content with mandatory attribution: direct and active hyperlink to www.orangesmile.com.
Vigo - guide chapters 1 2 3 4 5 6 7 8 9 10 11

Cathedrals and basilicas near Vigo
♥   Catedral de San Antón, Tui, 21.7 km from the center. On the map

♥   Sé Catedral de Santa Maria Maior, Viana do Castelo, 60.7 km from the center. On the map

Colors of Vigo in photos

Traditions and festivals in cities around Vigo

Galicia
Seafood for locals is not just daily food, but the most important national symbol too. Many indigenous people dedicate their entire life to seafood harvesting and making crafts of it; this important element of national culture simply couldn’t escape the attention of foreigners. Every year, O Grove Islands host the amazing Fiesta del marisco, which is visited by about 200,000 ... Open »
Ourense
Travelers visiting Ourense in early autumn will have a chance to take part in the traditional Wine Festival. This holiday is one of the oldest in the region - grape harvest celebrations were first held hundreds years ago. Now they have reached the scale of a major gastronomic festival, which is attended by sommeliers and wine experts from many countries. However, Ourense's ... Open »
Braga
The locals are very friendly to travellers. Owners of shops and vendors in the local markets are particularly fond of talking to foreigners. They are the best people to find out where will be hosted the next holiday, what sale should be attended, and what attractions must be seen in the first place. Do not forget to give a small reward for valuable advice and assistance. Local ... Open »
Guimaraes
Guimarães is a unique city for Portugal. This is where its "birth" as a state occurred. This was possible thanks to Afonso Henriques who is called the "First King". He was lucky to be born in this beautiful city. It was he who proclaimed the independence of Portugal from Castile and León in the 12th century. Of course, the new king's hometown has become the capital of the new ... Open »
Porto
Local people have numerous interesting traditions that must be definitely followed during the celebration of important dates and events. As vine is known as one of the most important national symbols, the presence of grape on a holiday table has always been a good sign. On New Year's night, when the clock strikes midnight, it’s necessary to make a wish and eat a grape. If ... Open »
A Coruna
One of the main features of La Coruna is locals’ friendly and welcoming attitude to visitors. They are always happy to talk to foreign travelers and treat those who are interested in their culture and traditions with a great respect. One of the popular proverbs says that residents of the island don’t treat anybody like a stranger; it means that guests from other states are ... Open »

Cityguide on traditions, mentality and lifestyle of people in Vigo. Learn the best periods to visit Vigo to discover its soul - authentic festivals, events and celebrations. We will also reveal the interesting habits, attitude towards the world and to tourists in Vigo.