Detailed hi-res maps of Galicia for download or print 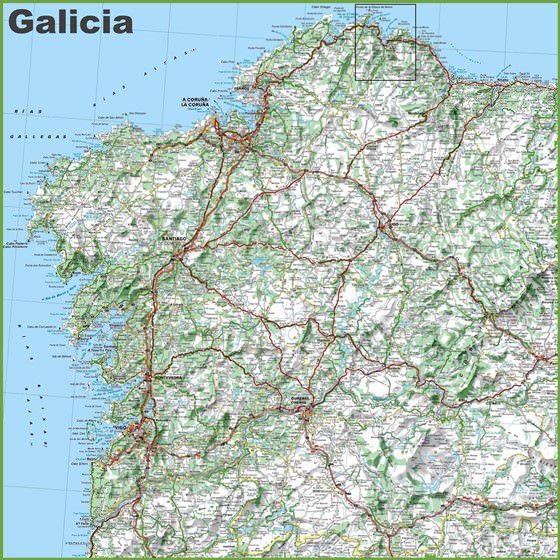 Search for services, infrastructure and sights on map of Galicia

Our guide chapters over Galicia

Playa de las Catedrales is unique for its natural cliffs and caverns. It is inaccessible during high tide, but in low tide it's an excellent place for walks and water entertainment. Torimbia – Niembro beach is amongst the most popular and busiest in Galicia. It is worth to wake up early, if you want to take a place on this beach. The famous Marivi seafood restaurant is located in the Torimbia – Niembro area too. … Open

7. La Coruna and some other cities of the region provide travelers absolutely free bike rental that will be an excellent alternative to public transport. The procedure of the initial registration is rather long and tedious, but afterwards it gives you an opportunity to use services of all urban rent centers freely. 8. Travelers who expect to find many exciting souvenirs should pay attention to local cheese and … Open

In the submontane area in Galicia, there are a lot of round-the-clock hotels. In summer, they attract fans of hiking tourism. The northern coast of the region is very popular with fans of the health tourism. There are vast eucalyptus groves near the beaches, so the air at the coast is rich with essential oils and rare minerals. The usual beach recreation in this unique place may become a really effective treatment … Open

The festival lasts for 9 days; guests are offered to diversify a rich gastronomic program with interesting folklore events. During the holiday, amazing concerts of folk music and dance performances are arranged. There are also exhibitions and competitions, in which absolutely everyone can participate. It’s worth noting that all prizes for contests and competitions consist exclusively of seafood, so the winner … Open

Guests of the region would have an opportunity to diversify their meal with excellent meats. Moreover, Galicia produces gorgeous cheeses and vegetables. Hearty empanadas pies with various fillings, grilled lacon con grelos with fresh vegetable salad and delicious filloas pancakes - these are only a few national dishes, which are definitely worth a try. Local wines can be a great complement for food; Albariño is … Open

La Coruna has a gorgeous shoe store Huellas, where you can buy a great pair of stylish shoes paying only 5-10 euros. Romantic gifts can be found at Brujerias store; among those represented there are many unique souvenirs and very beautiful things. It’s better to go to the Merca store to buy commemorative T-shirts, mugs and greeting cards. Shopping is an integral part of holidays. You could find interesting … Open