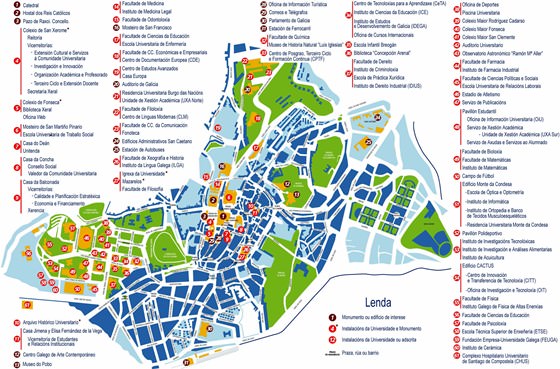 Search for services, infrastructure and sights on map of Santiago de Compostela

The restaurant will be a great place for holding of any festive event or a romantic dinner. A table there is recommended to be reserved in advance. Those tourists wishing to enjoy genuine delicacies and to try the best Spanish vintage wines are recommended to pay a visit to the Roberto restaurant offering a huge choice of unique signature dishes and rare exotic treats. Despite high prices the Roberto eating house is … Open

A truly remarkable architectural monument is Fonseca College building of the early 16th century. There remained a wonderful arcade with slender columns, carved towers, and windows of unusual shapes. You should definitely step into the inner courtyard that features landscaped compositions. In the center, is a statue of Santiago Alepho - the patron saint of the college. A vivid example of the Baroque architectural … Open

5. The building of the City Hall hosts a central tourist information office providing foreign guests with leaflets containing the list and descriptions of local landmarks. Tourists will also have a chance to specify the schedule of cultural events held in the city during their visit. The office also books excursions and tours offering sufficient discounts for groups of tourists. 6. To hunt some … Open

Santiago de Compostela can also present its guests with excellent escape clubs. One of the best centers of this kind is The Paradox Room, which gives you two well-decorated rooms to choose from. The center is unique in the fact that it offers participants a duel version of escape quests – they will be able to compete in solving all the presented problems with another team. For this, visitors are given the same 60 … Open

A popular night club of the city is the Malas Pecoras featuring original design of its hall and a variety of entertainment programs meeting each taste and fancy. Jazz fans should necessarily visit the Dado Dada bar which apart from live music offers its guests a good choice of speciality cocktails. The Meia bar invites large companies of mates to enjoy comfortable rest. The bar treats its regular visitors with … Open

Tourists will surely be invited to estimate its inner court of breathtaking beauty and to enjoy a marvelous parkland embracing the building. A symbolic historical object is the Porch of the Glory of Santiago de Compostela. The construction is located not far from the central square of the city. The building of the Porch was started as far back as in 1168 and lasted for 20 years. After a scale reconstruction the Porch … Open

Maps of Galicia
The festival lasts for 9 days; guests are offered to diversify a rich gastronomic program with interesting folklore events. During the holiday, amazing concerts of folk music and dance performances are arranged. There are also exhibitions and competitions, in which absolutely everyone can participate. It’s worth noting that all prizes for contests and competitions consist ... Open »
Maps of A Coruna
All the more so in the summer season, a lot of similar local festivals show the diversity of the local culture through with one can get into it. One of these is the Mundo Celta, which is held in mid-July in cultural institutions located in the city of Ortigueira near La Coruna. At this time, here you can hear the sounds of Scottish bagpipes, see colorful processions of people ... Open »
Maps of Vigo
In addition to this seafood festival, in Vigo, you can visit Fiesta del Mejillón (early September), Fiesta de la Sardina (early August), as well as Fiesta de la Cocina Marinera (July). All the festivals have the same friendly atmosphere, for the sake of which you can choose any of them. Semana Grande that falls on mid-August can be called another holiday that would be ... Open »
Maps of Guimaraes
The city has two interesting festivals related to students. The first one takes place in late November and is called the Nicolini Festivals. At this time, at night you can see the colorful procession with the so-called "pine" followed by a week of parties. Then Maçãzinhas starts, which always falls on December 6. This is a kind of invitation for a date - during the ... Open »
Maps of Porto
Do you like video games and superheroes? If yes, so there is no other choice for you but book tickets to Porto for early December. Here in Porto, the Portuguese version of Comic-Con festival is gathering the fans of fantastic pop culture from different countries. Within the framework of Comic-Con, more than 65 large-scale expositions will be opened in Porto from leading ... Open »
Maps of Oviedo
September 19th is a traditional holiday for celebrating the Día de América en Asturias. The event is dedicated to Asturians who went to work in America and could return to their families only in summer. Every year, about two thousand people witness the colorful carnival, and political figures of Asturias take part in the march too. Besides the parade, visitors will enjoy a ... Open »
Maps of Gijon
In addition to a variety of holiday items, a lot of interesting sweets and treats are sold at the market. The special Christmas delicacy is turron. On the eve of the New Year streets are decorated with aixames torches; they give the city a mysterious and romantic look. Talking about features of the local culture, we should definitely mention love for cider. The beautiful ... Open »
OrangeSmile.com - online travel reservation expert providing reliable car rental and hotel booking services. We feature more than 25.000 destinations with 12.000 rental offices and 200.000 hotels worldwide.
Secure Server