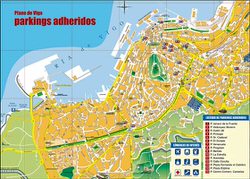 Interactive maps of hiking and biking routes around Vigo

1. You can zoom in/out using your mouse wheel, as well as move the map of Vigo with your mouse.
2. This interactive map presents two modes: 'Biking Routes' and 'Hiking Routes'. Use the '+' button on the map to switch between them.

This Vigo map has two modes: 'Railway Network' and 'Landscape & Rural Map'. Use the '+' button on the map to navigate.

Our guide to Vigo

Traditions and mentality of Vigo

Vigo is a city where people are always ready to help tourists if they face any troubles. The fact is that they have long been used to many travelers visiting their hometown, so assisting them is a kind of common practice. Locals consider themselves to be descendants of the Celtic Gauls (the name of the region of Galicia speaks about this). By mentality, they are strikingly different from Spaniards who are … Open

Fans of a first-class resort-style vacation will definitely like the exclusive Hotel Pazo Los Escudos Spa & Beach. It is located on an old country mansion situated near the popular Carrill Beach. For lovers of luxury, the hotel offers spacious suites with sliding panoramic windows and a large marble bathroom. The rooms are equipped with beautiful ancient-style furniture and are distinguished by aristocratic … Open

Vigo for children - what to visit

The city has excellent conditions for active recreation. During the warm season, many travelers go to the island Islas Cies. This snow-white sandy beach is ideal for resting with children; it is gentle and shallow, and the water here is always well warmed up. In addition to ideal conditions for water activities, the park is attractive and close to the reserve with the same name. At any time, vacationers can leave … Open

In an incredibly beautiful building with a century of history is located the attractive AC Hotel Palacio Universal by Marriott. When decorating its rooms, the designers succeeded in doing the incredible – with just two colors they created an interior worthy of admiration. The rooms are designed in black and white and contain chic beds and elegant furniture. Thanks to the panoramic windows to the full height of … Open