Video of flights over top monuments of Lisbon in HD format.
Use 'Full Screen' mode.
It’s hard to imagine Lisbon, and Portugal in general, without its famous architectural landmarks. Jeronimos Monastery, Castle of Sao Jorge, Santo Antonio Church, Lisbon Oceanarium, Santa Justa Lift, Triumphal Arch, and Monastery of Carmelites have shaped the historical and architectural look of Lisbon. Let’s take a closer look at these landmarks from an unusual perspective – simply fly over the main sights! The supporting video includes a virtual tour around the above mentioned architectural landmarks of Lisbon in HD format. Below, we will add the most exciting historical facts regarding every place of interest. The overview map of all iconic landmarks of Lisbon can be found at the bottom of the webpage. 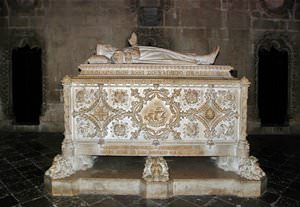 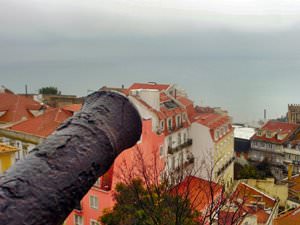 Facts:
» The Castle of Sao Jorge is the fortress located on a high hill; it’s visible from almost anywhere in the city.
» The castle has long served as a royal residence until the 16th century, when the Ribeira Palace was built.
» The Castle of Sao Jorge at different times was used as a theater, a prison and an arsenal. The earthquake of 1755 turned the castle in ruins.
» In 1938, active reconstruction of the castle began, in which the medieval wall restored, and the park with monuments to the Great King Afonso I and Manuel I was laid out.
» Today the castle is open for visitors who could climb the tower and enjoy breathtaking view of the city. The castle has interesting multimedia exhibition about the history of Lisbon. 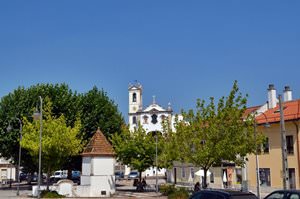 Facts:
» The Vasco da Gama Tower is the skyscraper of 140 meters, which is attached to the eponymous 72-meter high hotel.
» The tower was named after the Portuguese navigator, so the steel structure of the building resembles the sail of a caravel.
» The tower was built in 1998 for the Universal Exhibition Expo ‘98.
» There is an observation deck in the tower at an altitude of 120 meters, and just below there is the panoramic restaurant offering breathtaking views of Lisbon and the Tagus River.
» The luxurious 20-storey hotel with 178 rooms was added to the tower in 2007. 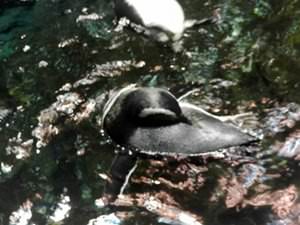 Facts:
» The Lisbon Oceanarium is located in the Park of Nations, which was also the fairground for the World Expo 1998.
» The Lisbon Oceanarium has a huge collection of marine species, including birds, mammals, fish, goad and other marine organisms. In total there are 16,000 birds of 450 species in the Oceanarium.
» The central aquarium is 7 meters deep; its volume of 5,000 m3 creates illusion of the open ocean.
» About one hundred species from around the world live in this aquarium, including sharks, rays, chimaeras, as well as various species of tuna, barracudas, groupers and moray eels. One of the main features is the large moon-fish, for which the unique environment was created.
» Other interesting species include two large spider crabs and two sea otters named Eusebio and Amalia. 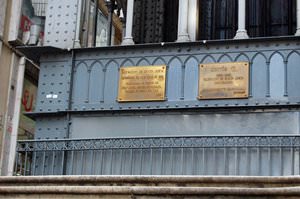 Facts:
» Santa Justa Lift is the elevator platform that was built to help pedestrians to overcome the steep slope, tying the Rua do Ouro (below) with an area of Largo do Carmo (above).
» In 2002, the object has been recognized as a monument of national importance.
» The Lift is built in Gothic Revival style. The height of the building is 45 meters.
» The elevator consists of two lifts; cabins are decorated with wood and mirrored panels. The capacity of each of the elevators is 19 seats and 10 standing places.
» The Lift is used by locals in everyday activity. Tourists are attracted by panoramic views from the upper platform. However, the transport service isn’t free.

Facts: » Construction of the Triumphal Arch began immediately after a major earthquake in 1755 as a symbol of restoration of Lisbon.
» Although arch construction started in 1755, it ended only in 1873.
» French architecture has inspired Portuguese for construction of arches.
» The arch had a clock and allegorical figures of Fame, Ingenuity and Courage, as well as statues of famous people: Viriatus, Nuno Alvares Pereira, Vasco da Gama and the Marquis of Pombal.
» Several sculptors were engaged in the artwork of arches.

Facts: » The Carmelite Monastery is the medieval Gothic monastery, which was built in 1389-1423 by the Portuguese knight Nuno Alvares Pereira for the Carmelite Order.
» Long ago, the Carmelite Monastery has been the main church of Lisbon; with its dimensions it was second only to the Lisbon cathedral.
» During an earthquake and fire in 1755, the monastery was almost destroyed; only heavy altar pieces have preserved. Reconstruction of the monastery has begun, but in 1834 the work was interrupted.
» As a result, it was decided not to rebuild the ruined church in the future, but just to leave it under the open sky. The arches of the buildings were mostly destroyed; pointed arches support parts of the surviving walls.
» Residential part of the monastery in 1836 was signed off to army, and the remains of the church were moved to the archaeological museum.

CONTINUE - PART II »»
This guide to architectural sightseeing in Lisbon is protected by the copyright law. You can re-publish this content with mandatory attribution: direct and active hyperlink to www.orangesmile.com.
Lisbon - guide chapters 1 2 3 4 5 6 7 8 9 10 11

Build your walking routes in Lisbon on the landmark map 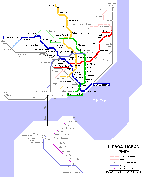 Architectural landmarks in the regions around Lisbon

Porto
The Porto Cathedral is the oldest and most revered in the city. It started to be built in 1110. An urban settlement was gradually growing around it. For centuries, a lot of interesting events took place at the cathedral. In 1387, King John I and English Princess Philippa of Lancaster got married. The son of John I, Henry, was baptized here. He was called “a sailor”, although he never took part in expeditions but organized such ... Open »
Sevilla
The Seville Cathedral is currently the largest Gothic cathedral in Europe. The Cathedral was built in 1401 - 1519. The length of the cathedral is about 116 meters, and the width is 76 m. The height of the cathedral is 42 meters, and the height of the bell tower is 105 meters. The cathedral is notable for its numerous relics and treasures including paintings by Murillo, Velazquez, Zurbaran and Goya in the Cathedral Bell Tower. The temple is ... Open »
Madrid
Palacio de Cibeles was originally designed as the central office of the telephone service, post and telegraph of Spain. The post office was built in 1918 and was called the Palace of Communication. Palace of Communication now houses the City Hall. This monumental building, decorating the area, represents one of the four pillars of modern civilization, power. Palacio de Cibeles consists of two buildings integrated with each other. This ... Open »
Bilbao
Believers came to the Basilica de Begona to worship the patroness of sailors, the Virgin Mary. Services are daily held in the religious institution. Grand festivals dedicated to the Virgin are held here twice a year. The church for her glory started to be built in the 16th century. The construction lasted a hundred years. That is why the exterior of the building combines Gothic and Baroque architectural styles. In the 19th century, ... Open »
San Sebastian
To build a summer cottage, the members of the Spanish royal family purchased the land at the coast of the bay. The residence was finished in 1893. The three-storey palace is located in the upper city. Servants lived on the upper floors. The basement was used for household needs. It is just a few meters from the beach. To link Antiguo with the other district of the city, the tunnel for vehicles was specifically built. The tunnel is dug ... Open »
OrangeSmile.com - online travel reservation expert providing reliable car rental and hotel booking services. We feature more than 25.000 destinations with 12.000 rental offices and 200.000 hotels worldwide.
Secure Server