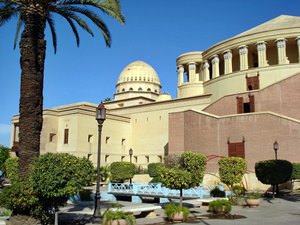 The main landmarks, such as Marrakech railways station, Koutoubia Mosque, Bab Agnaou, and Marrakesh Menara Airport, attract thousands of visitors, who come to Marrakech from different parts of the world every year. Marrakech is incredibly rich in absolutely stunning landmarks and important historic sights. are true masterpieces of architecture and architectonics at the international level. It’s time to look at every landmark of Marrakech in detail from an unusual point of view – interesting facts with hi-res photos, enriched with a virtual flight over 3D copies of all the architectural monuments. 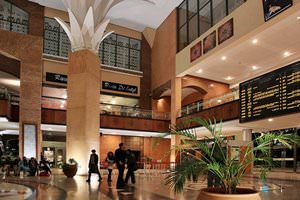 Facts:
» The new railway station of Marrakech was built next to the old one, which had been working since 1923. The station building is modern and spacious.
»  The main entrance, in the form of a high arch, is lined with a beautiful pattern in African style.
» The internal equipment has a modern set of amenities necessary for passengers. In addition to conventional cash registers, automated devices are installed. Employees who speak English are always ready to help.
»  There are several cafes where you can try local Moroccan dishes or traditional European patties and buns.
»  In the shops you can buy national souvenirs. Visiting tourists will find a map of the city at a tourist office.
»  A large information board duplicates information in English. Trains and wagons are equipped with modern technology and are very comfortable.
»  The new railway station is a truly landmark of the city. Its pictures can be seen on souvenirs and advertisements. 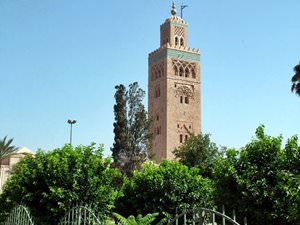 Facts:
» The Kutubia Mosque is a very ancient sight of Marrakech. Construction began in 1158 and ended in 1190.
»  At the same time, it had to be destroyed to the ground and again to start all over again. It turned out that the architect was mistaken, wrongly orienting the mosque to Mecca. For this he paid with his life.
»  Today the Temple towers over the city to a height of 77 meters. The minaret is crowned with four gilded spheres. And the stairs are so wide that a muezzin can ride it on a horse.
»  20,000 people can fit into the mosque at the same time.
»  The temple was used during various times as a library, as a school and as a university.
»  Only Muslims can enter the mosque. All the rest can walk over the the beautiful gardens. 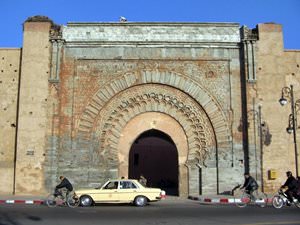 Facts:
» The Gates of Bab Agnau is an ancient landmark of Marrakech. Its name means "a hornless black sheep."
»  It was built in the 11th century by the Almohad sultans as a front entrance to the Old City, where the El-Badi Palace and the El Mansuria Mosque were located.
»  Initially there were two more towers at the gates, but they were destroyed. The gates carried a special decorative function.
»  The gates are made of limestone and brickwork. A soft stone made it possible to decorate the arch with original carvings and inscriptions in Kufic script.
»  In addition to Bab Agnau, there are 18 more gates in Marrakech. At present, the gate of Bab Agnau is considered the most interesting tourist object of the city.

Facts: » Marrakech Menara Airport was built in 2008 on the territory of the former airfield operating during the Second World War. It is one of the six airports in Morocco.
»  Local architects designed a state-of-the-art facility using the old Moroccan tradition in the design of the airport.
»  As a result, Marrakech Menara is recognized as one of the most beautiful airport in the world.
»  It has one runway, on which liners of all types can land. The airport accepts airplanes of both domestic and international flights.
»  During a year it serves about 4 million people. The airport has all the necessary amenities: exchange points, shops, restaurants, bars, post office, and pharmacy.
»  To get to the city, you can use a taxi, rented car or a public bus.

Facts: » Almoravid Kabba is a very ancient sanctuary that has been preserved since 1064. The building has a spherical dome, and kabba is translated as "dome."
»  The pavilion served as a worshiper for a bath before the mosque. Not far from it, a stone cistern and a fountain that supplied the city with water were excavated.
»  For many centuries, the building went underground several meters. People have escavated it out only in 1952.
»  Now, in order to enter the pavilion, it is necessary to descend to two flights of stairs.
»  A small building is striking with its beauty. Decorative arches, cut in the walls, the upper tier decorated with dents, and the dome, decorated with alabaster chevrons, completes the external architectural design.
»  Inside the pavilion, the dome space surprises with the beauty of its decoration.
»  Any believer, not just a Muslim, can enter Kubbu al-Baadian.

This guide to architectural sightseeing in Marrakech is protected by the copyright law. You can re-publish this content with mandatory attribution: direct and active hyperlink to www.orangesmile.com.
Marrakech - guide chapters 1 2 3 4 5 6 7 8 9 10

City tours, excursions and tickets in Marrakech and surroundings

Build your walking routes in Marrakech on the landmark map

Architectural landmarks in the regions around Marrakech

Sevilla
The Seville Cathedral is currently the largest Gothic cathedral in Europe. The Cathedral was built in 1401 - 1519. The length of the cathedral is about 116 meters, and the width is 76 m. The height of the cathedral is 42 meters, and the height of the bell tower is 105 meters. The cathedral is notable for its numerous relics and treasures including paintings by Murillo, Velazquez, Zurbaran and Goya in the Cathedral Bell Tower. The temple is ... Open »
Lisbon
The National Pantheon is one of the most impressive sights of Lisbon. This building was called the National Pantheon only in 1966, during the reign of dictator Antonio De Oliveira Salazar; previously it was the St. Engrasia Church. The church was built in the 12th century in Portuguese Baroque style. Interior of the construction complements the exterior. The floor and walls of the building are decorated with colored marble patterns, and the ... Open »
Madrid
Palacio de Cibeles was originally designed as the central office of the telephone service, post and telegraph of Spain. The post office was built in 1918 and was called the Palace of Communication. Palace of Communication now houses the City Hall. This monumental building, decorating the area, represents one of the four pillars of modern civilization, power. Palacio de Cibeles consists of two buildings integrated with each other. This ... Open »
Porto
The Porto Cathedral is the oldest and most revered in the city. It started to be built in 1110. An urban settlement was gradually growing around it. For centuries, a lot of interesting events took place at the cathedral. In 1387, King John I and English Princess Philippa of Lancaster got married. The son of John I, Henry, was baptized here. He was called “a sailor”, although he never took part in expeditions but organized such ... Open »
Bilbao
Believers came to the Basilica de Begona to worship the patroness of sailors, the Virgin Mary. Services are daily held in the religious institution. Grand festivals dedicated to the Virgin are held here twice a year. The church for her glory started to be built in the 16th century. The construction lasted a hundred years. That is why the exterior of the building combines Gothic and Baroque architectural styles. In the 19th century, ... Open »
OrangeSmile.com - online travel reservation expert providing reliable car rental and hotel booking services. We feature more than 25.000 destinations with 12.000 rental offices and 200.000 hotels worldwide.
Secure Server