Detailed hi-res maps of San Remo for download or print 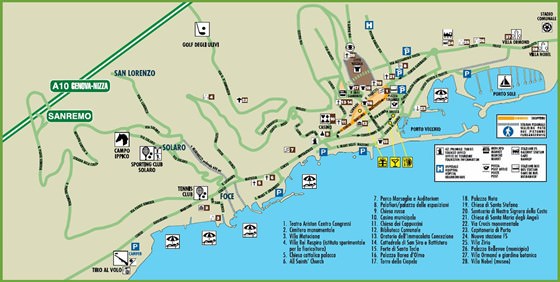 Search for services, infrastructure and sights on map of San Remo

Our guide chapters over San Remo

The oldest religious structure in the city is the San Siro Cathedral, built in the 12th century. The last major reconstruction of the temple took place in the 18th century. During this period Anton Maragliano worked on its interior design. Many of his unique works have survived up to now. Not far from the church, is located an ancient baptistery bearing the name of St. John. San Remo is known for its legendary … Open

2. The resort area is rather small thus the best way to cruise its territory is on foot. The main type of city transport in San Remo is a bus. The busses are cruising the city from early morning till late night. A bus station is located right in the center of the city. The station provides information on current routes and on cost of trips. 3. A popular type of transport among local residents is a … Open

The theaters of the city are perfectly suitable for cultural pastime; Teatro di Burattini Sunduk and Teatro Ariston are considered the best ones, where theatrical performances of various genres take place. In the pearl of the Italian Riviera, you can play mini-golf, and the youngest tourists will be especially happy with such activity. You can do it on the best site in the city – Golf su Pista. It is also worth … Open

Festivals and events in San Remo

Italians value fast and sports cars not less – there is enough evidence of this. One of them is the holding of the festival in which the best racers on the planet take part. We are talking about the Rallye Internazionale di Sanremo that has a long-won trust (or Rallye dei Fiori, as it was called earlier), which is traditionally held in late February. The auto-competition has a rich history, which started since … Open

Traditions and mentality of San Remo

Local musicians and actors clad in special festive dresses accompany each flower car. A tradition to celebrate this unique and marvelous festival was started far in 1904. Then the holiday had another name and another theme. The celebration was devoted to the Goddess of nature named Flora. A hundred years ago the festival was accompanied with original rituals and ceremonies. In the middle of the 20th century the … Open

No other restaurant of the city offers that huge selection of tasty treats and healthy foods on the menu. The main feature of the restaurant is a vast choice of desserts and sweets. The speciality treats are commonly made of fruits, that is why even healthy diet followers will be able to enjoy some sweet stuff. Among the city restaurants specializing in Mediterranean cuisine the Cocoon restaurant is one of the most … Open