Detailed hi-res maps of Nice for download or print 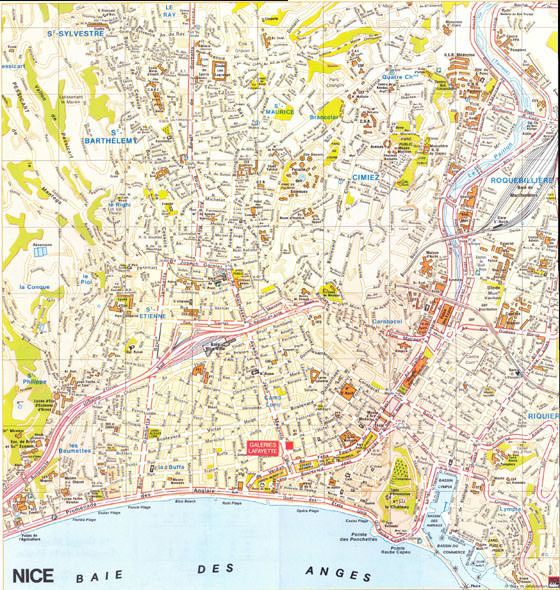 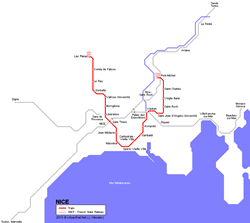 Search for services, infrastructure and sights on map of Nice

Our guide chapters over Nice

Shopping.
Of course, when you’re in such a city as Nice, it’s natural that you want not only to visit museums and walk along the embankment or climb the hill, but also want to attend various shops. Rue de France will be the best choice for that purpose. Do not forget about rue Masséna , a pedestrian street adjacent to rue de France. When you cross rue Massena from the west to … Open

The elegant and romantic B4 Nice Park offers magnificent guest rooms with panoramic views of Angels Bay. The design of guest rooms is made in Baroque style and never ceases to amaze guests with the abundance of antique elements. Travelers can also book charming rooms with private furnished balconies. Besides antique furniture, the hotel exhibits a large collection of artworks, so magnificent paintings, marble … Open

Nice for children - what to visit

If walking in the beautiful nature park is not enough, consider visiting Colline du Chateau or the Castle Hill. There is a magnificent botanical garden on the hill, a visit to which will certainly impress children and their parents. This park is very different from gardens that can be seen in other cities of France, and it offers wonderful playgrounds and rides for children. While kids will be busy playing and having … Open

The modern Interlaken is open not far from the railway station. The design of this hotel will certainly draw the attention of travelers who like bright colors and creative approach. Guest rooms are made in different colors, and so there are classic looking rooms with black-and-white design and romantic guest rooms with dominating pink and coffee shades. Moreover, some rooms look ultra modern and have all colors of … Open

The Flower Market is a true landmark of Nice. Despite such a name, this market sells not only flowers. There are many exotic national delicacies and organic products available for sale there. High-quality honey, homemade jam, marinated olives, and many other products that are popular with locals – you can find all these and more on the market. Flowers are very affordable here. In general, a bouquet would cost you … Open

Hotels with history of Nice

The luxurious Negresco is not just another historical hotel in Nice, it’s a true landmark of this wonderful city. The opening of the hotel took place in 1913. The hotel is located on picturesque Promenade des Anglais and is considered the most prestigious hotel in Nice. The design of the hotel simply strikes with its luxury. In the hall, guests can see a magnificent glass roof, the design of which was developed … Open