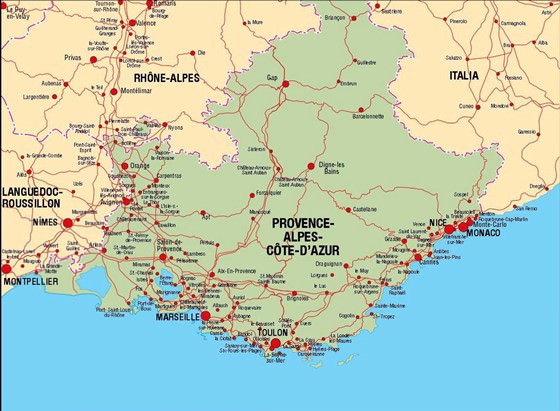 Search for services, infrastructure and sights on map of Provence - Cote d’Azur

In addition to different fruits and vegetables, Camargue rice is grown there; the region is also famous for its honey. Green meadows are ideal for the grazing of livestock, so the significant place in the national cuisine is occupied by meats and dairy products. Local cheeses can be called the hallmark of the region; you can find lots of interesting varieties in specialized shops and markets. Provence forests are … Open

The local culture and traditions of Provence are reflected in its beautiful holidays. Local people have being celebrating important religious dates and participating in colorful carnivals and music festivals for hundreds of years. The cultural calendar is full of modern and unusual holidays; one of the brightest and most awaited festivals is Carnaval de Nice. Carnival starts in the second half of February and … Open

Provence is a place where unique nature attractions are located. Fans of unusual sightseeing tours can see here the deepest canyon in Europe, the Verdon Gorge that is over 700 m deep. It has a special climate that is favorable for rare plants. It is very interesting to walk here in spring when you can admire the nature in all its beauty. Not so many people know that corrida (bullfight) is very popular in … Open

Travelers from all over the world come to enjoy beaches of Saint-Tropez. They certainly appeal to fans of relaxation in picturesque places, as extensive sandy beaches are surrounded by pinewoods. Guests of these places have a perfect opportunity to combine beach holiday with walks through the beautiful natural reserves. One of the most exclusive beaches of Saint-Tropez is de Pampelonne, where celebrities prefer to … Open

1. Fast TGV trains pass through these places. The trip by train would be convenient and cost-saving. The cost of tickets depends on several factors, including the time of the trip. You can buy the cheapest tickets for the evening and night trains. 2. It is very convenient to travel the region by car, and not just because of its high-quality roads. Many roadways lay in incredibly beautiful natural places, so the … Open

One of the most famous and popular entertainment areas of Riviera is Marineland; this is a real sea world with an incredible amount of amusement options. There are huge aquariums with tunnels and the Museum of the Sea; interesting shows with friendliest representatives of marine life are arranged there every day. Fans of water sports would enjoy the great water park with slides, pools and relaxation areas. Major … Open