Detailed hi-res maps of Le Havre for download or print 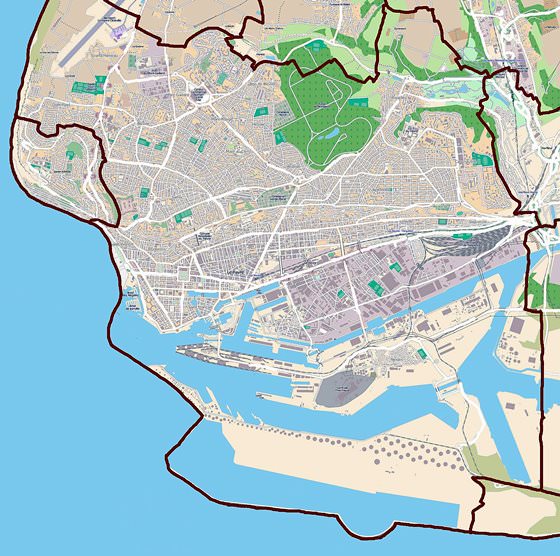 Search for services, infrastructure and sights on map of Le Havre

Our guide chapters over Le Havre

Traditions and mentality of Le Havre

Since locals are mostly positive, as already noted, they know how to party like nowhere else, and festivals they have are very welcoming and fun. First of all, it's worth mentioning an event devoted to jazz - Dixie days. It is held in Sainte-Adresse in mid-May. At this time, famous and talented bluesmen and jazzmen come here to entertain the audience, and Le Havre becomes the capital of jazz, taking over the baton … Open

For all who want to explore the most unusual attractions of Le Havre, it is worth visiting the ship owner’s house. This luxurious five-story mansion was built in the late 18th century. The family of the wealthy merchant Martin Pierre Fosh owned this mansion for many years. Outwardly, this cumbersome strict building does not represent a special interest, while inside it, are hidden unique historical treasures. … Open

The Mercure Le Havre Centre Bassin Du Commerce hotel will ideally suit all lovers of modern style and comfort. It is located next to the Bassin de Commerce business center. The privileged rooms available to guests deserve the highest praise; they are decorated in an aristocratic style and equipped with very beautiful light wood furniture. The existence of a coffee machine in the rooms will allow guests to enjoy … Open

One of the most stylish and attractive hotels in Le Havre – Comfort Hotel Urban City – is situated near the train station. Its spacious rooms with high-ceiling are furnished in simple black and white colors and are decorated with scarlet color accessories: pillows, bright fabrics, and fresh flowers. The hotel will catch the fancy of fans of modern painting, especially since works of contemporary artists are … Open

Cocci Market grocery store will appear a real find for budget tourists. Fresh products and French wine at reasonable prices are always available here. A bottle of Chablis will cost about 3 euros. Further to this, you can buy fresh baguettes, cheese, meat products, and seasonal vegetables and fruits. Espace Coty shopping center located in the Kochi district, will be interesting for a family visit. It presents shops … Open

9. Tourists should definitely not forget to visit the so called Creperie pancake cafes. They are great places where you can enjoy fresh pastries and, if necessary, order takeaway meals. 10. The locally produced cheese has always been one of the most popular souvenirs that travelers prefer to buy in the memory of their trip. Experts always mention that this cheese is distinguished by truly … Open