Detailed hi-res maps of Bayeux for download or print 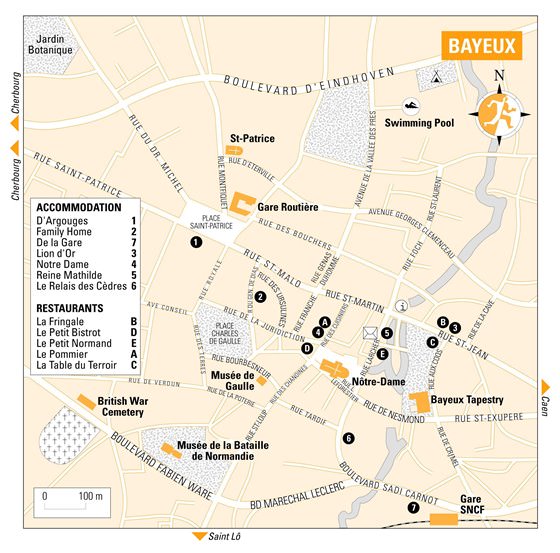 The actual dimensions of the Bayeux map are 2340 X 2311 pixels, file size (in bytes) - 756153. You can open this downloadable and printable map of Bayeux by clicking on the map itself or via this link: Open the map. 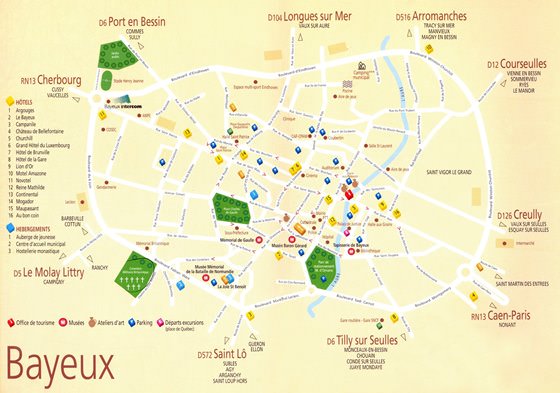 The actual dimensions of the Bayeux map are 2500 X 1756 pixels, file size (in bytes) - 855254. You can open, download and print this detailed map of Bayeux by clicking on the map itself or via this link: Open the map.

Search for services, infrastructure and sights on map of Bayeux

Our guide chapters over Bayeux

What attractions can Bayeux offer to its guests? The Bayeux Cathedral or Notre-Dame de Bayeux is the major and most important landmark in the town. The building works started in the 11th century and lasted almost four years. The building draws attention because of its gorgeous architecture and exceptional elegance. The cathedral is a gorgeous mix of gothic and Romanesque styles. The 16th century, which brought … Open

Maps of Normandy
Lower Normandy was separated from France for several centuries. It became a part of it in the 13th century. Here was one of the main centres of Protestantism in Europe. In addition, a mutual cultural and economic exchange between the British and the French went through Lower Normandy for many years. So, the locals get along well with the neighbours –the Britons and they ... Open »
Maps of Le Havre
July 14th is a festival widely celebrated in France, which is treated with special respect. In Le Havre, the celebration is as exciting as in other cities. This means that national symbols are everywhere, the whole city is decorated, a military parade passes along the main streets, and festive fireworks becomes the culmination of the holiday. Of course, the holiday is not ... Open »
Maps of Provence - Cote d'Azur
Marseille hosts a very beautiful religious festival, Procession à la Madone. The religious celebration is held on 15th August. The holiday program begins in the square at the Cathedral. The gilded statue of the Virgin Mary is taken out of the Cathedral; the solemn procession passes through ancient streets accompanied by thousands of people. During the procession, anyone can ... Open »
Maps of Southampton
A fest which music lovers will find interesting is held at the end of May and is called the Environmental Rock Festival. The place where you can hear high-quality rock music from local bands is The Hobbit pub, one of the most popular spots among locals and tourists alike, all thanks to its atmosphere. In addition, to live listening to music, visitors to the pub can play ... Open »
OrangeSmile.com - online travel reservation expert providing reliable car rental and hotel booking services. We feature more than 25.000 destinations with 12.000 rental offices and 200.000 hotels worldwide.
Secure Server