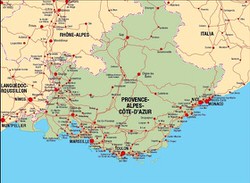 1. You can zoom in/out using your mouse wheel, as well as move the map of Provence - Cote d’Azur with your mouse.
2. This interactive map presents two modes: 'Biking Routes' and 'Hiking Routes'. Use the '+' button on the map to switch between them.

This Provence - Cote d’Azur map has two modes: 'Railway Network' and 'Landscape & Rural Map'. Use the '+' button on the map to navigate.

Our guide to Provence - Cote d’Azur

Not so many people know that corrida (bullfight) is very popular in France. Provence is considered to be the homeland of this entertainment. In comparison with the Spanish corrida, the French one is more humane. Bulls are not injured here at all. So, it is interesting to watch this spectacle even with children. The Provence cuisine is also a true national heritage and is famous all over the world. To taste … Open

Numerous fans of beach rest that are going to Provence choose Marseille to stay; it’s an ancient port city, the second largest settlement in the country. Marseille beaches are incredibly picturesque and have a developed infrastructure, so those in need for comfort don’t have to worry about the lack of amenities. One of the largest is the Prado beach surrounded by scenic green landscapes. The beach is very … Open

7. Tourists who are planning a vacation in Nice and want to spend a lot of time on the coast should definitely buy a special pair of beach slippers. The fact is that there is pebble on all local beaches that gives a lot of inconvenience. 8. The Cote d' Azur features the well-developed public transport system. You can comfortably travel by buses. Another popular mode of transport is tram. It would be very … Open

Marseille hosts a very beautiful religious festival, Procession à la Madone. The religious celebration is held on 15th August. The holiday program begins in the square at the Cathedral. The gilded statue of the Virgin Mary is taken out of the Cathedral; the solemn procession passes through ancient streets accompanied by thousands of people. During the procession, anyone can put his rosary on statue’s hands or … Open

Provence forests are rich in priceless treasures, and it's not just about the game, but also about truffles. Travelers are offered to taste this national delicacy in local restaurants. Fans of fish dishes won’t be bored too, as Provence and the Cote d' Azur are famous for their excellent fish restaurants. The most popular and recognizable dish is bouillabaisse soup; experienced travelers recommend trying it … Open

One of the most attractive regions of France is ready to offer its guests everything necessary for an interesting stay. The Cote d'Azur has luxury beach resorts and cutting-edge entertainment options, while Provence is a real storehouse of natural attractions and sport venues. Hikers would like the natural park of Ecrins striking with a diversity of landscapes. There are snow-covered glaciers and crystal- clear … Open