Detailed hi-res maps of Patmos for download or print 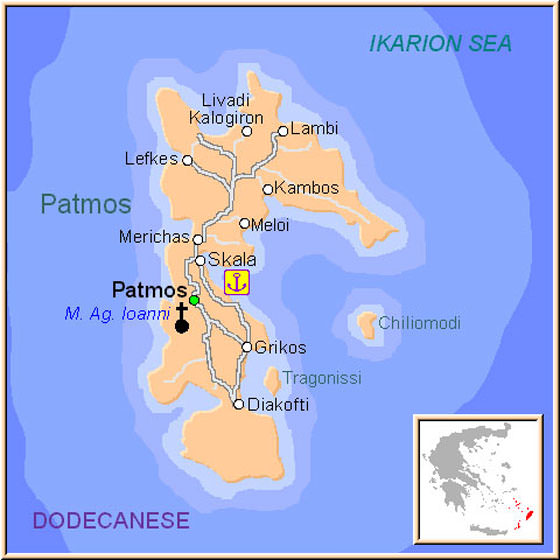 The actual dimensions of the Patmos map are 480 X 480 pixels, file size (in bytes) - 48203. You can open this downloadable and printable map of Patmos by clicking on the map itself or via this link: Open the map.

City tours, excursions and tickets in Patmos and surroundings

Moving around in Greece - transportation

Public transport in the country is of high quality. The fare is quite affordable. Buses run not only inside the cities, but also connect all the regions of the mainland. There are buses every day from 5am to 12am. Night routes also run in the big cities and along the most significant roads. Inside the city, it is also possible to move around on trams and trolleybuses. Since 2000, there is a subway in Athens. Underground lines still don’t cover all parts of the capital of Greece. However, the subway is used by local residents and is popular among tourists. There are a lot of taxi services. Unlike European countries, the price of a ride is not too high. The cost of landing is 1 euro;1 km of the way will cost you from 10 to 50 cents, depending on the date, the time of day, and the city. Greece has a well-developed railway network. The express train is very popular. You will find comfort and service in the first class. Second-class cars often don’t have air conditioning and can be quite dirty. It is also possible to travel in a sleeping car. … Open

Search for services, infrastructure and sights on map of Patmos

Our guide chapters over Patmos

This is a small and cozy island, where tourists will always find calm and harmony. As a rule, tourists just pass this place through because numerous exciting tours are conducted in Patmos. The most popular beach of Patmos is Grigos. The sea in this area is always calm, so the conditions are ideal for scuba diving. Other two popular beaches, Kambos and Diakofti, are located nearby. Their length is slightly smaller … Open

An amazing cultural institution is an ethnographic museum called the "House of Simandiris". This private museum is located in the capital of the island, the city of Chora. It has been managed by the Simandiris family for several years. The museum is housed in a very beautiful ancient building where it was possible to preserve the old decoration as much as possible. Among its exhibits are unique ones, whose age is … Open

Maps of Kalymnos Island
A typical day in Greece starts at 8 o’clock. Locals wake up, have a cup of coffee and a light breakfast, work till 2 o’clock and have siesta till 5 o’clock. Try to plan your holiday, because almost all the cafes, shops and public places are closed during the period of siesta. Locals sleep at home or sunbathe during this time, they try to gain strength to finish the ... Open »
Maps of Amorgos Island
Amorgos is filled with relaxed atmosphere. Greeks can be hardly called workaholics. They try to make the most of life and enjoy every moment. It is not customed here to work hard, if a Greek gets a large sum of money, he can easily spend a large sum of money on useless things or an evening in a tavern. Money is just one more way to enjoy life. Locals think that there is no need ... Open »
Maps of Kos
One of the island's holidays is dedicated to the "Father of Medicine". The most interesting events are organized in the capital of the island. The open-air festival's program includes not only musical and dance performances but also art exhibitions and theatrical shows recreating scenes from the life of Hippocrates. During the festival, thematic excursions are organized to the ... Open »
Maps of Kusadasi
Kusadasi is a beautiful old city with its interesting features and traditions. Its name can be literally translated as "Bird Island", pigeons have been its main symbol for hundreds of years. They settled the picturesque island many years ago, mother nature itself created ideal conditions for these birds here. For local residents, they have become a kind of symbol. In contrast ... Open »
Maps of Bodrum
In early September, in Bodrum you can hear jazz riffs - it's time for the International Jazz Music Festival. The venue is a fortress bearing the name of the city, as well as shopping malls. Moreover, jazz musicians delight visitors just in the sea, playing their favorite music on boats. The next important local event is the International Baroque Music Festival, which ... Open »
Maps of Naxos
The island of Naxos is one of the most interesting and distinctive regions of Greece. It is interesting not only for the variety of historical sights and natural beauties but also for its cultural traditions. A lot of holidays are held on the island throughout the year. Some festivals have been celebrated by locals for more than a hundred years. Naxos is an island of volcanic ... Open »
OrangeSmile.com - online travel reservation expert providing reliable car rental and hotel booking services. We feature more than 25.000 destinations with 12.000 rental offices and 200.000 hotels worldwide.
Secure Server