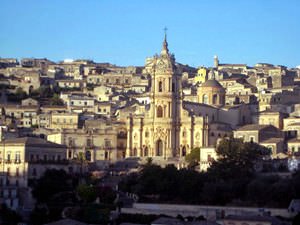 The best destination to start the exploration of the landmarks of Modena is the Palazzo dei Musei. The museum tells it visitors about the most significant events of the city history. The museum is placed in a majestic ancient building which was built in the 18th century and served as an armory. The main showpieces of the museums are considered to be historical records. Some of them were issued as far back as 14th century. Another remarkable tourist destination of the city is the San Cataldo cemetery. The place is of great interest for architectural art connoisseurs.
Extraordinary weekend in Modena - unusual places, services and attractions for travel gourmet
…

Open
Despite the solemn and grave character of the landmark, the cemetery is daily visited by hundreds of curious travelers wishing to observe magnificent statuary groups and tomb-chests with their own eyes. A remarkable sight of the Middle Ages period is the main city square which is an established place of holding various fests and public events at present.
The square has preserved the pole of shame as well as several stone blocks which were moved to the city center a few centuries ago. The main furnish of the city square is a majestic statue called la Bonissima. According to one of the theories the statue is commemorated to the goddess of harvest. The statue of a beautiful woman with a fruit in her hands has become one of the main symbols of the city. Among other architectural landmarks of this tourist destination the Ducal Palaca or Palacco Ducale is best worth noticing. Copyright www.orangesmile.com
Shopping in Modena - main shopping streets, outlets and boutiques
In Modena, shopping enthusiasts should pay attention to local shoe shops that offer high-quality shoes at very attractive prices. One of the most popular shops is Barney that specializes in …

Open
The construction of the palace was started in the 17th century. Since that time the large building has constantly been changing its appearances and looks and has been added with new structures. At present the impressive palace hosts the Italian Military Academy. The main religious landmark of the city is the Cathedral of Modena named Duomo. The building stuns with its size, impressive architectural style and rich decoration of the interior.

The frontage of the Cathedral is painted in dazzling white, the walls of the Cathedral interior are coated with ingeniously carved marble. In front of the Cathedral one will find a majestic square which is an established place for holding carnivals and other entertaining events. The same attractive religious object is the San Giuseppe Cathedral. It was built in the 11th century and is still perfectly preserved. The frontage of the building has survived through scale renovation for several times meanwhile its interior still remains unchanged since the moment of the Cathedral establishment. The Cathedral keeps numerous significant religious artifacts aged hundreds of years.
Guide to Modena sightseeing - things to see and to visit
This ancient Italian town attracts visitors primarily by its rich cultural program. There are many interesting and beautiful places, visiting which will become a real pleasure to any …

Open
You should complete your route with a trip to the Forum Boarium (Foro Boario) that is located near a perfect place for walks, Parco Archeologico Novi Ark. It is named after the Serbian city Novi Sad, a sister city of Modena. At the top of the construction, there is a clock. On the sides, you can see monuments representing weapons and art. From the side of the park, the Forum is decorated with bulls’ heads. At one time, there was a market under its vault. Then, the building served as barracks. You should also visit the Manifattura dei Tabacchi. It is a contemporary art gallery. 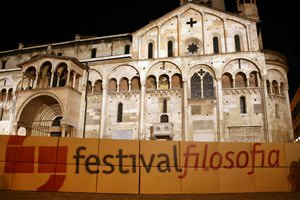 Modena is famous for one of the oldest pharmacies. The Antica Farmacia Ospedali Riuniti (già Sant Agostino) has been reconstructed with an original exterior and interior. Here, you can find interesting ancient scripts and medicine and spice descriptions. The building was built in the 18th century. Then, you should visit the Acetaia Villa San Donnino. The farm is famous even beyond the balsamic vinegar company in Modena. Here, you can learn everything about the production process and buy amazing balsamic vinegar at the exit.
Family holidays with kids in Modena. How to entertain your child, things to show to children.
Modena is a beautiful miniature town in which there are many interesting entertainment for vacationers with children. The city has a beautiful Lago Parco Zoo. This zoo is very different from …

Open
Tourists that want to admire religious attractions will be impressed by Modena because there are several wonderful shrines. One of the most impressive churches is Chiesa di Sant'Agostino. It was built in 1338 and gained its present appearance in 1670 when it was reconstructed. It impresses travelers with its luxurious interior, beautiful altar, moldings on the ceiling, and pieces of art. The most precious relic here is the crucifix by Antonio Begarelli. Besides Christian churches and temples in Modena, there is also a synagogue (Comunità Ebraica) with a beautiful facade and a spacious Orthodox church (Chiesa Ortodossa Tutti i Santi). 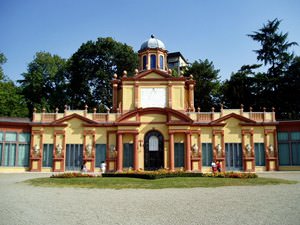 In Modena, many outstanding people were born. Some of them are Luciano Pavarotti and Enzo Ferrari. You can see monuments to them here. The sculpture of the opera singer is located on the Via Carlo Goldoni. The monument to the racing car constructor is on the Via Emilia Ovest. Besides, the houses where they were born and lived were turned into museums. To learn more about the city, you should also visit the Casa Museo Luciano Pavarotti and the Museo Casa Enzo Ferrari. Their original exterior and interior have been preserved. Also, some murals are dedicated to the famous opera singer. You can see the Murale a Luciano Pavarotti along Viale Mazzoni.
Cuisine of Modena for gourmet with top restaurants and cafe
One of the most famous and popular eating houses of Modena is the Fini restaurant. Its elegant hall is designed in keeping to the best traditions of the Art Nouveau style. The restaurant …

Open
Such car museums, as Stanguellini and Collezione Umberto Panini are also worth being mentioned. Here, you can see unique collections of Italian racing cars. It should be noted that you can visit the first museum only by appointment. If you want to learn about the history of the city, visit the Museo Civico Archeologico Etnologico. Here, you can see the rich collection of artifacts of various periods, from the Paleolithic to the Middle Ages. The Museo del Presepe is also worth being mentioned. It houses the interesting collection of Italian Christmas presepes, i.e. the pictures depicting the birth of Jesus Christ. 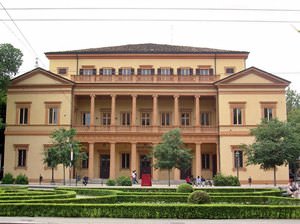 The Museo di Zoologia ed Anatomia Comparata gives a unique opportunity to learn about flora and fauna of different regions. In the museum, you can also see stuffed animals (insects, birds, reptiles). The Museo di Anatomia is an excellent place for acquainting with the history of medicine and surgery in particular. By the way, too squeamish people are not recommended to come here. Also, you should visit several theatres of the city (Teatro Comunale Luciano Pavarotti, Teatro Storchi) to have a good time and enjoy theatrical performances. Near the Teatro Storchi, there is Fontana Dei Due Fiumi. Here, you can see a beautiful fountain that is the main symbol of the square.

In the section below, you can get one of our excursion, activities or city discovery tours over Modena and surroundings. Our website offers 10-30% lower ticket prices, when compared to the offline purchase on the spot.

City tours, excursions and tickets in Modena and surroundings

This guide to cultural sights Modena is protected by the copyright law. You can re-publish this content with mandatory attribution: direct and active hyperlink to www.orangesmile.com.
Modena - guide chapters 1 2 3 4 5 6 7 8 9
Reference information
Map of all palaces

Public palaces near Modena
♥   Palace 'Ducal Palace' Modena, 0.6 km from the center. On the map

Cathedrals and basilicas near Modena
♥   Basilica Abbaziale di San Silvestro I Papa, Nonantola, 10.2 km from the center. On the map 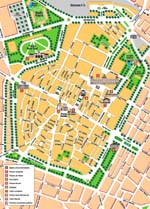 Photogallery of cultural heritage of Modena

Excursions over cultural sights of neighbours of Modena

Emilia-Romagna Region
In Piacenza you will see the street design, typical for ancient Rome Empire. No surprise here – this place was a big trade centre of the region since the 2nd century BC. Visit the San Sisto Church, for which the great Raphael Sanzio had painted the world-famous “Sistine Madonna”. Though, the masterpiece was later presented to a Polish king, so now you can only see the ... Open »
Bologna
Santo Stefano Basilica is a no less remarkable religious object and a true example of Romanesque architecture style. The Basilica is a complex of four ancient churches, the oldest of which was built in the 5th century. This wonderful architectural ensemble does not cease to attract couples and people who look for happiness in their personal lives. It is believed that a person ... Open »
Parma
Among religious landmarks of the city the abbey church of Saint John the Evangelist (San Giovanni Evangelista) is well worth visiting. The church is one of the brightest and most remarkable landmarks of the Renaissance epoch. A high building with ingeniously finished frontage keeps plenty of significant religious artifacts. Tourists should necessarily estimate the inner ... Open »
Imola
San Casciano is considered the oldest building in the city. The construction of this landmark was finished at the beginning of the 11th century. During its long history, the church was rebuilt several times, but it still has managed to retain its original look. There is one more fabulous building not far from the church – an ancient library. The library was also converted ... Open »
Verona
Vacationers should definitely not forget to see the beautiful arch bridge of Ponte Pietra, the building of was also conducted yet in the prehistoric era. The bridge was seriously damaged during the Second World War, but thanks to efforts of skilled architects it was restored. Santa Maria Antica Church remains one of the most interesting religious sites of the city. This is a ... Open »
Lucca
Not far from the Cathedral the Giglio theater is set. It is located on the del Giglio square. It is not only the main theater of the city but is one of the most famous theaters of Tuscany. Every city guest should visit this art temple as it features excellent stock of plays and exciting decoration of the hall. The significant landmark of Lucca is the amphitheater square. The ... Open »

Culture guide to Modena. Which fascinating sights to visit once you are in Modena: temples, churches, museums, theaters and castles. Recommendations (with addresses, phone numbers and links) on the places 'must visit' in Modena. Plan your own city excursion by using this page info!