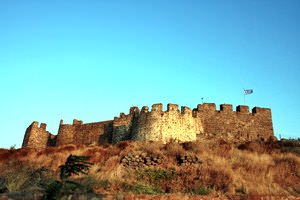 Many foreigners tend to associate the island of Lesbos with the symbolism of same-sex love. Such analogies were based on the ancient Greek myths, according to which, in ancient times, only women who denied any contact with men lived on the island. Such mythological tales are now embodied in modern culture. The island is a popular vacation destination among LGBT people.
Cuisine of Lesvos for gourmet with top restaurants and cafe
Lesbos is a true paradise for fans of Greek cuisine; there are attractive restaurants of national cuisine in every city of the island. Food lovers and tourists with special culinary …

Open
It is important to note that locals themselves have a negative attitude to such symbols and have repeatedly appealed to the court with a request to rename their native island and relieve them of such associations. Despite the fact that such appeals were unsuccessful, local residents decided to rename the island on their own. Today, most of them use the unofficial name Mytilini eponymous with the capital. For modern ethics and culture considerations, travelers are recommended to use this name as well.
Local people are very welcoming and friendly, proud of their historical and cultural heritage. They are distinguished by high religiosity, many old Christian churches have been preserved on the island. Throughout the year, the islanders celebrate beautiful religious holidays, the most significant of which are Christmas and Easter. On holidays, local residents observe interesting traditions and rituals, which can be witnessed by guests of local resorts. The islanders are also known for their hardworking character, most of them are now engaged in the agricultural sector and fishing industry. Copyright www.orangesmile.com
Excursion over cultural sights of Lesvos - 'must visit' points of interest
Most iconic landmarks of the island are located in the port city of Mytilene. Here you can see beautiful Byzantine buildings, ancient churches, monuments and examples of modern architecture. …

Open
Traditional crafts have always been revered here. The island is home to hereditary potters and woodcarvers whose workshops can be visited in literally all cities and villages. Ceramics are some of the most popular souvenirs among tourists. Besides, they can buy interesting handicrafts and home decorations made of wood and clay. Lesbos is the venue for numerous international festivals, which are invariably visited by many foreign guests. 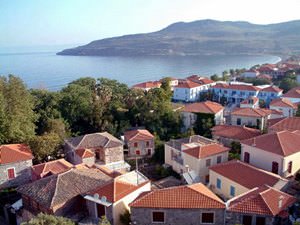 In August, the International Music Festival takes place in the city of Mithymna. Each year, the festival follows a certain theme and invites musicians from around the world take. Concerts are held not only in local cultural centers but also right on the streets. Guests of the festival can visit musical performances for free. The main participants of the festival are groups performing classical music. Great attention is always paid to the participation of children who are thus introduced to the world of art.
Your active city break in Lesvos. Attractions, recreation and entertainment - best places to spend your day and night here
Lesbos is popular among fans of beach rest, as its clean and calm coast is ideal for water sports. Near the capital city is Viglia Beach; it is considered the most popular on the island. …

Open
In recent years, Lesbos has also become the venue for the International Gastronomy Festival, which typically involves at least ten cities and villages located on the island. Each settlement prepares a unique program involving tastings of the best regional products and traditional dishes. The festival usually lasts at least ten days and every day "moves" to another city. It is participated by local farmers and winemakers, as well as the best chefs and representatives of other regions of Greece.

The most unusual holiday in Lesbos' calendar is the International Women's Festival, which is mainly visited by lesbian women. This festival was held for the first time in 2000 but caused discontent from local authorities. They tried to achieve an official ban on the event but numerous claims have been ignored. The women’s festival became annual, today it is one of the main places of pilgrimage for lesbians in the world. The venue for holding the unusual event is the village of Eresos where an interesting entertainment program is arranged for ladies. Here, open-air cinemas show thematic films and a huge selection of romantic entertainment is available to female visitors. They can watch the sunset in the most picturesque corners of the coast, take exciting boat trips or learn traditional Greek dances.
Advices to travellers: what you should know while being in Lesvos
1. Major part of shops and malls open no later than 8:30 am; large shopping complexes can work till late at night. During the day, the lunch break is possible, which usually lasts at least …

Open
It’s kind of amazing that such a great variety of holidays and traditions coexists on such a tiny island. The town of Agiassos is a permanent venue for the annual Satire Carnival, which was born here in 1938. Modern Lesvos will surely surprise travelers with its multifaceted culture, in which historical traditions are surprisingly combined with modern trends.

This guide to traditions and festivals in Lesvos is protected by the copyright law. You can re-publish this content with mandatory attribution: direct and active hyperlink to www.orangesmile.com.
Lesvos - guide chapters 1 2 3 4 5 6 7 8 9 10

City tours, excursions and tickets in Lesvos and surroundings

Survived castles around Lesvos
♥   Castle 'Castle of Mytilene' Mytilene, 17.8 km from the center. On the map

Colors of Lesvos in photos

Traditions and festivals in cities around Lesvos

Mitilini
Mitilini is one of the romantic cities in Greece due to special traditions of celebrating Saint Valentine's Day founded here. For the locals, 14 February is not just a fashionable modern holiday. On this day, an important religious holiday is celebrated. In Mitilini, there is an old Catholic temple where an important religious relic has been kept for many years. It is the ... Open »
Chios Island
Siesta is an important ritual in Greece. Try to plan your holiday, because almost all the cafes and shops are closed from 2 to 5 o’clock. Locals spend their free time sleeping or lying on the beach, making the most of their leisure time. A working day ends at about 9 o’clock and Greeks meet with their friends and have fun. Local citizens drink a lot, but you will hardly ... Open »
Izmir
In the middle of March, Manisa, a town located not far from the motherland of Homer, hosts one more interesting festival called Mesir Macunu. The date of this festival is connected with the Islamic holiday of Nowruz. Mesir Macunu is one of the best events to get acquainted with the local culture and see the traditions of cooking the healing sweet paste (according to a legend, ... Open »
Limnos Island
You should refer to the Greek by the first name as long as he did not ask to call himself by the second name. Local inhabitants are quite hospitable people. But if a Greek invites you to his house, it doesn't mean that you will have dinner there. Most of the locals prefer to eat in local taverns. However, they are good cooks, especially men who even attend culinary classes. ... Open »
Lemnos
Many young people take part in programs aimed at the development of sports and sports infrastructure of the island. Such programs are already bearing fruit, Lemnos is the location of some of the best surfing schools in Greece. Within the framework of such a multifaceted holiday, special attention is paid to children's culture and creativity. For the youngest participants, ... Open »
Samos Island
So, if you don’t want to lose the sympathy of the locals, try to behave decently. If you are going to visit remote Samos villages, remember that life is different there. People are conservative and have a different concept of life. So, try to dress modestly if you don’t want to be blamed by older generations. It is also important to look properly if you are going to visit ... Open »

Cityguide on traditions, mentality and lifestyle of people in Lesvos. Learn the best periods to visit Lesvos to discover its soul - authentic festivals, events and celebrations. We will also reveal the interesting habits, attitude towards the world and to tourists in Lesvos.