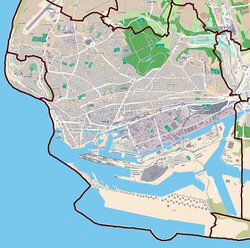 Interactive maps of hiking and biking routes around Le Havre

1. You can zoom in/out using your mouse wheel, as well as move the map of Le Havre with your mouse.
2. This interactive map presents two modes: 'Biking Routes' and 'Hiking Routes'. Use the '+' button on the map to switch between them.

This Le Havre map has two modes: 'Railway Network' and 'Landscape & Rural Map'. Use the '+' button on the map to navigate.

Our guide to Le Havre

9. Tourists should definitely not forget to visit the so called Creperie pancake cafes. They are great places where you can enjoy fresh pastries and, if necessary, order takeaway meals. 10. The locally produced cheese has always been one of the most popular souvenirs that travelers prefer to buy in the memory of their trip. Experts always mention that this cheese is distinguished by truly … Open

Those who prefer to feel a huge dose of adrenaline in the blood should be recommended tours from Abeille Parachutisme providing the opportunity to skydive over the amazingly beautiful city. Another company offering services of this kind is called Aéroclub du Havre Jean Maridor. The flight will long remain in the memory of everyone who've decided to experience skydiving. Another great pastime is sitting at the … Open

Festivals and events in Le Havre

Another interesting event held in the city is Festival Moz'aïque Le Havre. It takes place in Les Jardins Suspendus Park in the middle of July. This is a music festival where vivid impressions are guaranteed since here you can listen to eminent and talented musical performers. And since the festival is held in the open air, it attracts all fans of outdoor recreation. The event is international in nature - among the … Open

Vacation at the hotel Le Petit Vatel promises to be unforgettable and full of romance. This budget resort-type mini-hotel is simply amazing; it offers its clients bright rooms with panoramic views of the coast. The interior of the rooms is very simple and attractive; they are painted in warm colors and decorated with exquisite fabrics of rich shades. Guests are invited to start their day with a delicious … Open

Many tourists go to Le Note Bleue store to acquire souvenirs. Its numerous customers are not intimidated by high prices. You can always find something special among the presented souvenirs. Women will appreciate jewelry and accessories made of semiprecious stones. Those who want to save money will be able to choose lovely magnets with symbols of the city, keyrings and other inexpensive accessories. Cocci Market … Open

Adherents of a low-cost vacation will also have the opportunity to spend several days in an attractive design hotel, talking about the Residence Hoteliere Du Havre. The spacious rooms at this modern hotel are painted in black and white colors, furnished with very beautiful furniture, and decorated with exclusive fabrics. Original chandeliers make the interior of the rooms simple and strict, while public areas, on … Open