Family trip to Ios Island with children. Ideas on where to go with your child 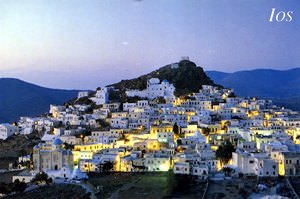 Ios is not a large island. Its width is 10 kilometres and the length is about 20. There are not many amusements parks and cinemas, but your child won't be bored on the island. Ios gives the opportunity to enjoy the atmosphere of the island and to know more about the history of Antiquity. If your child is tired of excursions and museums, he can try snorkelling or yachting.
Your active city break in Ios Island. Attractions, recreation and entertainment - best places to spend your day and night here
Ios will be an ideal place for those tourists who like walking. The island is small, so it is difficult to get lost here but is easy to find a lot of picturesque places on Ios. Well groomed …

Open
Here you can introduce the child to the biography and work of Homer, the greatest poet of Ancient Greece. Ios is directly connected with this legendary figure because Homer’s mother lived here. Moreover, he was buried here according to ancient historians. You can show the child the tomb of the famous poet and also acquaint the child with the history of Hellas, described in the Iliad. Furthermore, visit the Archaeological Museum of Chora to explore the history of ancient settlers.
The Archaeological Museum was founded in 1998 and it has a rich collection of weapons and household items found during excavations. Most of the findings were found at the ancient city of Ios, situated at the present location of Chora. Agia Theodoti is a village where you can see the buildings of the Hellenistic era. There are remains of an ancient tower from the Hellenistic period and traces of an ancient aqueduct near the hill. There are also two water tanks called Tholo and Tholaki from the Frankish period. You can visit Psati, where you can see the ruins of a Greek temple. There is one more ancient tower in Plakoto. Copyright www.orangesmile.com
Best beaches and recreation areas around Ios Island
Mylopotas Beach is the most popular and the busiest beach of Ios. It’s located next to Chora and its port area. This sand beach is about kilometer long and is known for lively …

Open
Fans of fairy tales about princesses, dragons and knights and young historians will be certainly interested in the fortress built during the reign of the Venetians on Ios. You can find it near the Paleokastro. The construction hasn’t preserved well, but you can distinguish the main parts of the fortification. If your child has read legendary «Don Quixote», he will be happy to see ancient windmills near the capital. 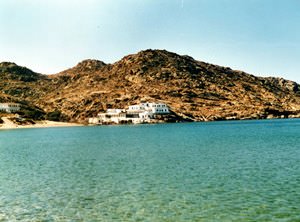 Many children will like the local churches. The most outstanding religious buildings on the island are the temples of St. Catherine and John the Baptist. If your child is indifferent to religion, he may be interested in rich and skillfully made interior decoration of the churches. Young connoisseurs of art should visit the Museum of Modern Art at Kolitsani. There is a remarkable collection of works of Jean Marie Dro and other artists. You can visit the museum in summer and admire art and photo exhibitions. If your child is keen on photography, it is worth spending a couple of days on a hiking trip around the island. There are a lot of astonishing views that every photographer wants to capture.
Top hotels in Ios Island for business trip or short vacation
Comfortable guest houses and apartments are the most extent hospitality places on Ios, but there's also a good choice of luxurious resort hotels. Dionysos hotel in Mylopotas is widely …

Open
All the five beaches in Manganari Bay are perfect for family holidays. The crystal clear water deepens very slowly and there is a playground close to the bay. Kolitsani and Kalamos are secluded beaches near Agia Theodoti. Chora is not the best place for children. The city is a centre of nightlife on the island. Spend some time and go on a sea trip around Ios. There are picturesque places, where you can get only by sea. Teenagers can try their hand at waterskiing, diving and windsurfing and small children will enjoy swimming in crystal water.

This guide to family holidays in Ios Island is protected by the copyright law. You can re-publish this content with mandatory attribution: direct and active hyperlink to www.orangesmile.com.
Ios Island - guide chapters 1 2 3 4 5 6 7 8 9 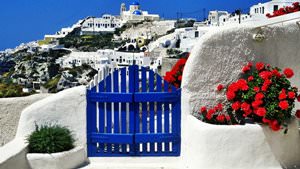 Distance from Ios Island center - 39.5 km.
Santorini, a Greece island, is familiar to lovers of beach holidays. This island in the Aegean Sea attracts not only with its charming beaches but also with modern hotels and the unique architecture. The main landmark of the island is the tiny white houses with wooden doors, window shutters and blue gates. The picture is completed by a number of colourful flowers and oriental plants. Locals set them out in flower pots right on their backyard. … Read further

Interesting places to visit with children around Ios Island

Folegandros Island
You can go on a boat trip around the coast of Folegandros in calm weather. Small children will like the spirit of adventure and teenagers will appreciate brilliant views and secluded places, where you can go only by boat. Don’t pass by the opportunity to visit Chrysospilia cave. It is one of the largest caves in Greece with stalagmites and stalactites. Scientists still ... Open »
Sifnos Island
You can walk with your child in the archaeological park of St. Andreas, where you should definitely see all the sights. The child will be able to get acquainted with the customs of the indigenous people of Sifnos in the village of Artemonas, where the Folk Exhibition of Yannis Atsonios is located. In its essence, the exhibition is a house-museum, furnished in accordance with ... Open »
Amorgos Island
Be sure to visit Amorgos, the capital of the island. The medieval Cycladic city is rich with ancient houses and churches. The city is a fine example of old Greek architecture. There are the ruins of the fortress on the hill which was built in order to protect the settlement from the pirates. Gavras Tower of Amorgos is a gorgeous 16th-century Venetian building characterized by ... Open »
Milos Island
In Plaka, it is worthwhile to take the child to the Archaeological Museum. In addition to a rich collection of finds of the ancient period, there you can find a plaster copy of the famous Aphrodite, which was taken to France back in the 19th century. Here, in Plaka, you can visit the Ethnographic Museum with your child. Small kids will be curious to look at unusual things, ... Open »
Mykonos Island
Be careful while walking in Kastro, the oldest district of Chora, you can easily get lost here. All the streets were built in order to protect citizens from pirate raids. Kastro and Little Venice are perfect places for children, fond of photography. These places are not only filled with the spirit of ancient times and have a rich history, but they are also incredibly ... Open »
Seriphos Island
For example, you can visit the abandoned mine, where the child will get the opportunity to learn about the profession of a miner in the old days. There is also a small mining museum, where the child will be shown a variety of different tools and told where, how and when they were used. Your child will certainly be happy to enter inside of the mine, listen to the guide, see ... Open »

Guide to sightseeing and entertainment for children in Ios Island - parks, attractions, museums, zoos, water-parks. All fascinating and educational sites of Ios Island, which are must visit and see for your child. Find out the best discovery routes and places for kids (local theaters, exhibitions and museums), where you can spend quality time together. Ios Island for families with children.