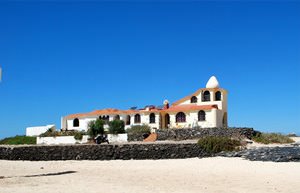 Each town of Fuerteventura has its own great attraction, so the island is ready to offer its guests an extensive cultural program. An interesting site is the Museum of Miguel de Unamuno dedicated to the life and work of the famous writer and philosopher. The museum is situated in the old building of the Fuerteventura Hotel, where the writer has stayed during his visit to the island. The atmosphere of past years has been preserved in the room where he lived; there are personal belongings, manuscripts and photographs of the writer among exhibits.
Guide to Fuerteventura sightseeing - things to see and to visit
This island is located not far away from the coast of Africa. This is a true paradise for beach lovers. White sand, turquoise sea and beautiful nature attract thousands of visitors to this …

Open
You should definitely include the Archeological Museum of Betancuria in the recreation program. Its priceless collection is dedicated to the life and culture of early settlers of the island. There are many unique religious items and crafts among exhibits. It is worth noting that the Betancuria settlement itself is a major attraction of the island; it is located in the crater of an extinct volcano.
The picturesque town of Antigua is a craft center; old mills are situated there. One of them is converted into a museum that presents the flour mill equipment and other tools of local artisans. Nearby is the Salt Museum with a very interesting and unique exhibition. There are also outstanding religious sites in Antigua; the most important among them is the Church of Nuestra Senora Antigua. It is situated in incredibly beautiful natural surroundings and differs with an incomparable appearance. Copyright www.orangesmile.com
Cuisine of Fuerteventura for gourmet with top restaurants and cafe
The picturesque island will delight fans of gastronomic tourism with a large selection of ethnic restaurants. You should definitely include a tasting of popular national dishes in the …

Open
Travelers fascinated by architectural attractions like the picturesque village of La Oliva. The main object of a tour to these places is the governor's mansion; after a complete renovation the old building was open to public access. Nearby is the Church of Nuestra Señora de Candelaria, the main feature of which is an unusual square-shaped bell tower. The interior decoration of the church decorated with the baroque altar and old paintings, as well as skillful frescos depicting the Last Judgment, is also worth noting. Fans of art will have an opportunity to visit the great art gallery in La Oliva. It represents works of outstanding Canarian painters.

This guide to cultural sights Fuerteventura is protected by the copyright law. You can re-publish this content with mandatory attribution: direct and active hyperlink to www.orangesmile.com.
Fuerteventura - guide chapters 1 2 3 4 5 6 7 8

What to visit during two-day excursion in Fuerteventura

Life On The Beach

Another center of the country's culture is the capital of Catalonia, Barcelona. The most famous and grandiose architectural structures are located there. They are mainly created by the legendary architect Antonio Gaudi. The Temple of the Holy Family or Sagrada Familia is a real landmark of the city and one of its symbols. The construction of the temple began in 1882. It does not stop until now. All elements in the building have a deep religious significance. The building is topped by numerous towers. Other, not less effective constructions of Gaudi are the house of the Batlló and the Mila House. In the house of Batlló, the traveler will not find any straight line, as Gaudi was inspired by the figure of a giant dragon. Mila House belongs to a private organization. Today, it regularly hosts exhibitions. … Open

Photogallery of cultural heritage of Fuerteventura

Excursions over cultural sights of neighbours of Fuerteventura

Puerto del Carmen
The historic quarter of the town begins very close to the harbor. Spanish fishermen built their homes in the traditional style here in the past. The old quarter hasn't changed much today. Even the headman's house is still there. However, fishermen have not lived here for several decades. Enterprising businessmen bought the buildings, restored them, and tried to restore the ... Open »
Lanzarote
Lanzarote is a beautiful island with an abundance of natural and historical attractions. There are more than three hundred extinct volcanoes on its territory; it also has architectural monuments of different eras and unique historical sites. Since 1852, the island's capital is the city of Arrecife. Its territory is home to nearly half of island’s population. Travelers will be ... Open »
Las Palmas
House Museum of Columbus acting as a part of a large-scale exhibition center would be interesting for guests of the island. The great explorer had stayed in that house in 1492. The exposition of the museum tells the story of the development of relations between Canary Islands and America. Theater-goers should visit the Perez Galdos Theater, which was opened in 1887. A few ... Open »
Gran Canaria
In Gran Canaria you will find all kind of attractions that will surely leave many unforgettable impressions and memories. Iglesia de San Juan An Church is an important object of excursions. The construction of the church started in 1906. The project of the magnificent building in the Neo Gothic style is the work of the famous Catalan architect Gaudi. It took almost 70 years to ... Open »
Maspalomas
Guests can easily combine their relaxation on picturesque beaches of Maspalomas with the exploration of local landmarks. History fans simply cannot fail to visit Plaza de las Mujeres. This gorgeous district is located not far from the popular Meloneras Beach. Several years ago, archeologists started exploring this area and found many unique artifacts. This helped Plaza de las ... Open »
Puerto de la Cruz
Several centuries ago it protected the seaside territory from the number of pirates and conquerors, this castle saved the city’s and habitants’ destiny for several times. The age-old fishing port will be beautiful place for walking on foot. It hasn’t been changed for the last hundred years: here it is still possible to see the fishermen’s boats arriving, and near the ... Open »

Culture guide to Fuerteventura. Which fascinating sights to visit once you are in Fuerteventura: temples, churches, museums, theaters and castles. Recommendations (with addresses, phone numbers and links) on the places 'must visit' in Fuerteventura. Plan your own city excursion by using this page info!