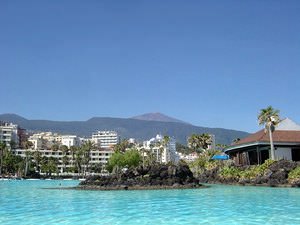 Puerto-de-la-Cruz is the oldest resort in Tenerife, it strikingly differs from neighboring beach resorts. The primary number of habitants live exactly here, also there are a lot of important historical objects. The city’s symbol is excellent Charko square, whose main decoration is statue of God’s Mother. All the national celebrations and important events are organized at the square; near it is possible to see several interesting touristical objects, popular restaurants and shops.
Cuisine of Puerto de la Cruz for gourmet with top restaurants and cafe
This popular resort will please tourists by wealthy assortment of restaurants and cafes, some gastronomical establishments are more popular. One of the popular restaurants of the city is La …

Open
Among religious sights it is important to note the church Nuestra Senora de la Pena de Francia, almost every night there are wedding ceremonies in this church. It is noted for attractive appearance and luxurious internal decoration, a lot of romantic legends and stories are concerned with this sight. On the resort’s territory several important armed constructions are kept, there is the medieval stronghold San Felipe among them.
Several centuries ago it protected the seaside territory from the number of pirates and conquerors, this castle saved the city’s and habitants’ destiny for several times. The age-old fishing port will be beautiful place for walking on foot. It hasn’t been changed for the last hundred years: here it is still possible to see the fishermen’s boats arriving, and near the port district there is good fishing market. Copyright www.orangesmile.com
Your active city break in Puerto de la Cruz. Attractions, recreation and entertainment - best places to spend your day and night here
Puerto-de-la-Cruz can offer two exotic beaches, covered by black volcanic sand to its guests. The beach Playa Jardin is more popular, it is equipped by everything what is needed for …

Open
One of the most beautiful architectural monuments is Casa de la Real. In spite of the fact that it is the monument of the later period, this effective building looks quite harmonically next to old ones. A lot of historical houses were rebuilt to entertaining establishments and shops, and this fact makes the walking more pleasant. 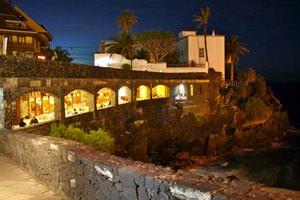 So, Casa de Miranda is another curious historical monument. Today in this dimensioned and beautiful palace there is famous national restaurant and also perfect souvenir shop. Also Casa Abaco and Casa Iriarte palaces attract travelers’ attention; there are beautiful old houses almost in every resort’s street. One of the most popular establishments of the city is concert hall Fiesta-Canaria, where different musical and folklore events are organized.

In the section below, you can get one of our excursion, activities or city discovery tours over Puerto de la Cruz and surroundings. Our website offers 10-30% lower ticket prices, when compared to the offline purchase on the spot.

This guide to cultural sights Puerto de la Cruz is protected by the copyright law. You can re-publish this content with mandatory attribution: direct and active hyperlink to www.orangesmile.com.
Puerto de la Cruz - guide chapters 1 2 3 4 5 6

Unique spots in Puerto de la Cruz and near 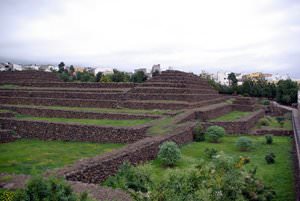 Distance from Puerto de la Cruz center - 15 km.
The Guimar Pyramids, located in the Spanish city of the same name, have recently become one of the most visited sites in the country. At present there are six pyramids on the territory of the popular Canarian spa. They have the regular step form and are made of stone. In contrast to the other old buildings of this kind, the Guimar Pyramids have no burden of terrible secrets and legends. They were built by the locals without any deep purpose. … Read further

Tenerife
After admiring mysterious ancient sites it’s worth to go to the southern part of the island, where there is a beautiful castle of San Miguel. It is located near the picturesque town of the same name. Interesting theatrical performances are regularly organized for visitors of the castle. The castle was built relatively recently as an arena for jousting and theater; it is an ... Open »
Canary Islands
The island of Gran Canaria is also rich in tourist attractions. The unique cultural center Cueva Pintada is situated there. It can be found in the cave of the same name, where many drawings of the primitive people have remained. Currently, this large-scale archaeological complex consists of six caves and an interesting museum housing a collection of unique items. The tiny ... Open »
Los Gigantes
Not far from Los Gigantes, you will find the main cultural center of the island - Auditorio de Tenerife. This concert hall was opened in 2003 and became one of the island's most spectacular architectural monuments. It can accommodate more than 1,600 spectators at a time and often hosts concerts of various kinds. Auditorio de Tenerife has a special chamber hall, which would be ... Open »
Adeje
Adeje is a resort that is famous for numerous natural places of interest. Visitors of the city should definitely make a sea voyage on a yacht, during which you will be able to admire the picturesque coast and even see the dolphins. Luxury hotel complexes occupy a significant part of the territory of the city. Many of them were built only 10 - 15 years ago. Some hotels simply ... Open »
Playa de las Americas
As for the concert hall’s appearance it reminds of majestic ancient Greek temple, its front is decorated by various statues; concert ground is noted for original appearance too. The resort is famous for a number of natural sights, its unique object is Jungle Park. This picturesque part of virginal nature represents tropical jungles, surrounded by ridge of rocks. The main ... Open »
La Gomera
Ancient religious buildings have also preserved on the island. The excursion program should definitely include a visit to the Church of Nuestra Senora de la Asuncion. It was built in the late 15th century. Now it is a fine example of medieval architecture. The main natural attraction of the island is the Garajonay National Park. This amazingly beautiful nature reserve attracts ... Open »