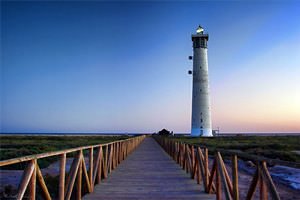 Fuerteventura is considered to be the oldest island of the Canary archipelago. It has got its name because of the specific climatic conditions, as very strong wind is blowing on the island all year round. In Spanish ‘fuerte’ means ‘strong’ and ‘el viento’ is ‘wind,’ thus, the phrase gave the name to the island.
Excursion over cultural sights of Fuerteventura - 'must visit' points of interest
Each town of Fuerteventura has its own great attraction, so the island is ready to offer its guests an extensive cultural program. An interesting site is the Museum of Miguel de Unamuno …

Open
Currently, the administrative center of the island is a picturesque town of Puerto del Rosario, which literally translates as ‘Port of Roses.’ Several centuries ago, the city had a less romantic name of Puerto de Cabras, which has translated as ‘a goat port.’ The fact is that there is the gorge close to the island’s capital, where herds of goats went to drink every day. It should be noted that goats represent a real national symbol of the island; they caused its worldwide fame.
Local farmers produce special sort of cottage cheese of goat’s milk, which is set above rubies by gourmets from foreign countries. While walking travelers will certainly notice that an unusual national symbol can be seen in the most unexpected places. You hardly can see a car without bumper sticker or airbrush with a picture of a goat. At first glance it may seem that there are more animals on the island than people themselves. Copyright www.orangesmile.com
Your active city break in Fuerteventura. Attractions, recreation and entertainment - best places to spend your day and night here
Fuerteventura is the island full of sun and tranquility. Those who love outdoor activities and sunbathing on the beautiful beaches would enjoy a vacation here; the island doesn’t …

Open
Another interesting character is Fuereventura’s mill; great flour is made on the island. Local residents consider a mill to be the symbol of wealth and prosperity; they treat old structures with great care, so many mills on the island are more than hundred years old. It is noteworthy that indigenous inhabitants divide mills into two types, male and female. The first type has a square base; it is easily distinguished by the angularity of appearance. Female mills have a cylindrical base and are considered more attractive in appearance. 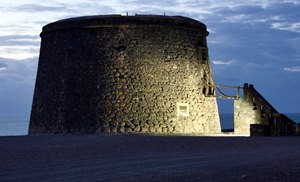 Each year, the island hosts the International Kite Festival. The first time this unusual festival was organized in 1987. The festival is held in mid-November; it is considered to be the most original and interesting event for tourists. There are exciting competitions and raffles, activities for children and spectacular fireworks show during it. Festival is held on Corralejo Beach; for three days it turns into a party platform.

This guide to traditions and festivals in Fuerteventura is protected by the copyright law. You can re-publish this content with mandatory attribution: direct and active hyperlink to www.orangesmile.com.
Fuerteventura - guide chapters 1 2 3 4 5 6 7 8

Cathedrals and basilicas near Fuerteventura
♥   Iglesia de Nuestra Señora de Guadalupe, Teguise, 91.2 km from the center. On the map

Survived castles around Fuerteventura
♥   Castle 'Castle of Guanapay' Canary Islands, 91.5 km from the center. On the map

Spaniards owe their mentality to the peculiarities of the location of the country. The hot Mediterranean climate does not contribute to a long working day. On the contrary, the working capacity is reduced as much as possible in the midday heat. Spain has the longest siesta in Europe. It starts at 1 pm and lasts until 5pm. At this time shops, cafes, restaurants, and businesses do not work. Such a long afternoon rest helps the nervous system  to relax. At this time, Spaniards traditionally sleep, communicate, and drink coffee. The unhurried rhythm of life in this country is almost a national treasure. The Spaniards are proud to know how to love and appreciate life and enjoy all its moments. … Open

Colors of Fuerteventura in photos

Traditions and festivals in cities around Fuerteventura

Puerto del Carmen
The locals don't expect you to apologize for anything. They are also likely to remain silent if they accidentally step on your foot, for example. Citizens are sure that both praise and apologies should be sincere and only on a significant occasion. If you sit at the same table with the locals, do not be surprised that the desire to eat delicious food prevails over the norms ... Open »
Lanzarote
Many state institutions and shops open early, no later than 7:30 am, but already at 1:00 pm almost all those places are closed for lunch. It is rather long making out at least three hours, but in the evening shops and banks begin serving clients once again and then work till the evening. This kind of schedule is due to the sultry weather, in the middle of a hot day locals ... Open »
Las Palmas
Fans of classical music have to visit Las Palmas at the end of January, when the music festival starts. During the month, concerts featuring local and international teams, as well as other fun activities are held. One of the most striking events in the cultural life of the city is the Carnival, which is usually held in February or March. Carnival lasts for at least three weeks ... Open »
Gran Canaria
Gran Canaria is known for celebrating any event “on a grand scale,” or “de tiros largos,” as locals would say. The Carnival of Las Palmas is rightly considered the most colorful event. Usually, it is held in February, sometimes the date falls on the beginning of March. It is in no way inferior in color to the famous celebration in Rio de Janeiro. The same things ... Open »
Maspalomas
Carnival programs include processions, fashion shows, and theatrical performances. Interestingly, almost all of them are usually announced by a special ironic opening speech. It's called pregon here. Muras’s competitions are held on the streets of the town during all days of the carnival. These are carnival groups that perform mostly satirical songs. You can also see ... Open »
Tenerife
The end of the Carnival is very amazing and heart-stirring. The last day of the festival is called ‘The funeral of sardines.’ The huge figure of fish made ​​of papier-mache is burned on one of the city squares; the process is accompanied by the loud cry of local residents and visitors of the Carnival. This comical and touching ritual signals the end of the Carnival, ... Open »

Cityguide on traditions, mentality and lifestyle of people in Fuerteventura. Learn the best periods to visit Fuerteventura to discover its soul - authentic festivals, events and celebrations. We will also reveal the interesting habits, attitude towards the world and to tourists in Fuerteventura.