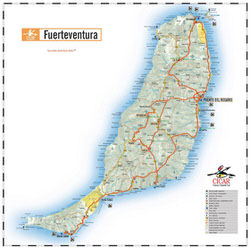 Interactive maps of hiking and biking routes around Fuerteventura

1. You can zoom in/out using your mouse wheel, as well as move the map of Fuerteventura with your mouse.
2. This interactive map presents two modes: 'Biking Routes' and 'Hiking Routes'. Use the '+' button on the map to switch between them.

This Fuerteventura map has two modes: 'Railway Network' and 'Landscape & Rural Map'. Use the '+' button on the map to navigate.

Our guide to Fuerteventura

5. The main tourist office is located at the island's airport, and tourist information centers can be found in all major cities of the island. They serve customers daily from 8:00 am to 3:00 pm; Saturday and Sunday are half-days. 6. The only currency used is euro; travelers can exchange money literally in any bank or private exchange office. Going out for shopping, it’s better to take enough of small … Open

Costa Calma is among the most popular places for family vacation. Youngest tourists will certainly like this calm and flat beach. Excellent ecology and advanced equipment are among its advantages too. The beach is about 1.5 kilometers long and there's a number of restaurants located nearby. Another choice vacations with children is Playa del Mal Nombre beach located in the Jandia beach area. The beach is covered with … Open

The town of La Oliva will also appeal to those who love scenic beaches and historical sights. The famous old Casa de los Coroneles manor is located on its territory. An art gallery operates within its walls nowadays. Many mysteries are associated with the old house. The exact date of its construction is unknown. Some suggest that it was erected in the middle of the 18th century. Originally, the mansion served the … Open

Currently, the administrative center of the island is a picturesque town of Puerto del Rosario, which literally translates as ‘Port of Roses.’ Several centuries ago, the city had a less romantic name of Puerto de Cabras, which has translated as ‘a goat port.’ The fact is that there is the gorge close to the island’s capital, where herds of goats went to drink every day. It should be noted that … Open

The local cuisine has some important distinctive features, for example, Fuerteventura is famous for its excellent cheeses. The mahorero cheese produced of goat’s milk is well-known to gourmets. Cheese has an incomparable taste and lots of benefits, for which it has repeatedly won awards at international exhibitions. Restaurants of Fuerteventura make out the paradise for seafood lovers. Among the classical … Open

There are dozens of excellent beaches on the island. Cofete, Corralejo and Barlovento located in the northern part of the island are suitable for surfing fans. The most large-beach, Sotavento, is located on the east coast; its length is more than 30 kilometers. Nominally the beach is divided into several areas. Fans of spearfishing and diving are recommended to visit Morro del Jable and Playa de Corralejo, as they … Open