Detailed hi-res maps of Fuerteventura for download or print 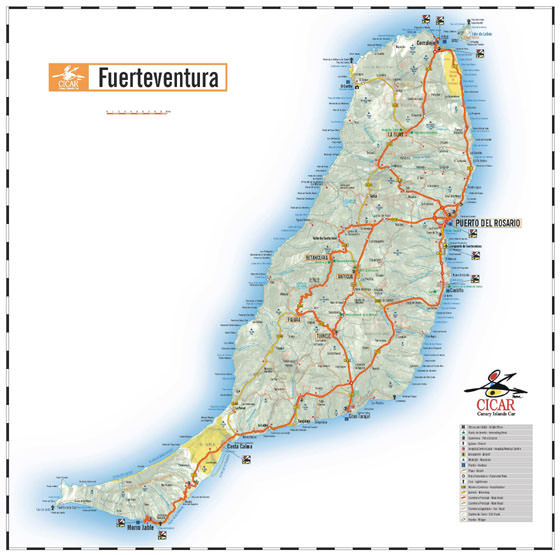 The actual dimensions of the Fuerteventura map are 2354 X 2334 pixels, file size (in bytes) - 449700. You can open this downloadable and printable map of Fuerteventura by clicking on the map itself or via this link: Open the map.
Fuerteventura - guide chapters 1 2 3 4 5 6 7 8

Search for services, infrastructure and sights on map of Fuerteventura

Our guide chapters over Fuerteventura

The old charming town of Puerto del Rosario lies in the eastern part of the island. From the middle of the 19th century, it is the capital of the island. The town is receiving much travelers' attention nowadays with its distinctive atmosphere. It has preserved many beautiful centuries-old buildings. There are popular beaches here, as well. The famous Spanish writer Miguel de Umano House Museum is one of the main … Open

Calm and picturesque beaches of Fuerteventura are widely regarded among the best on Canary Islands. In total there are several dozens of beaches on the island, including pretty large ones. In total, the island’s coastline is about 340 kilometers long. One third of it is occupied with wonderful beaches covered with snow-white sand, but there are also lots of rocky and pebble-stone beaches. Sotavento beach … Open

7. Going for a trip, don’t forget to learn a few simple phrases in Spanish and to take a Spanish phrase book. This will please local people and help to show respect for national traditions. 8. Mains voltage is 220-225 V (AC); some appliances may need adapters. Major hotels provide them on request, but you can buy adapters in any supermarket too. 9. Local tap water has a salty taste, so it isn’t … Open

Each year, the island hosts the International Kite Festival. The first time this unusual festival was organized in 1987. The festival is held in mid-November; it is considered to be the most original and interesting event for tourists. There are exciting competitions and raffles, activities for children and spectacular fireworks show during it. Festival is held on Corralejo Beach; for three days it turns into a … Open

Spanish restaurants are common on the island. Tapas bars are also popular among holidaymakers. In restaurants of Spanish cuisine a decent selection of national dishes is represented; they serve great paella, traditional tortilla and popular tapas snacks. A pleasant surprise waits for sweet lovers on the island, as there they could taste the incomparable creamy dessert, bienmesable. It is made of rum, almond cream … Open

In the southern part of the island near La Lahita there is a beautiful botanical garden, which is one of the most important attractions of Fuerteventura. In the garden there are more than 2,500 species of exotic plants and cacti, its unique collection is considered to be one of the richest in the world. The vast part of the nightclubs and bars of the island is located in Corralejo. The Flicks Bar karaoke bar, The … Open