Cuisine of Fuerteventura for gourmets. Places for dinner - best restaurants 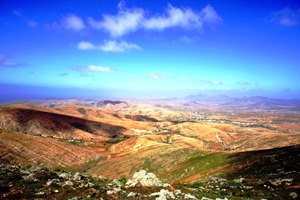 The picturesque island will delight fans of gastronomic tourism with a large selection of ethnic restaurants. You should definitely include a tasting of popular national dishes in the recreation program, as Canarian cuisine is considered one of the most interesting in the world. It features an abundance of exotic seafood and interesting vegetable dishes; many travelers prefer local fruits.
Authentic traditions, festivals and lifestyle of Fuerteventura inhabitants
Fuerteventura is considered to be the oldest island of the Canary archipelago. It has got its name because of the specific climatic conditions, as very strong wind is blowing on the island …

Open
The local cuisine has some important distinctive features, for example, Fuerteventura is famous for its excellent cheeses. The mahorero cheese produced of goat’s milk is well-known to gourmets. Cheese has an incomparable taste and lots of benefits, for which it has repeatedly won awards at international exhibitions.
Restaurants of Fuerteventura make out the paradise for seafood lovers. Among the classical treats sea bass and sea bream are noteworthy; local chefs prepare excellent tuna and swordfish. Fans of more exotic treats would like shark meat. In addition to fish dishes, you are sure to enjoy original sauces. Literally at any local restaurant visitors are offered a decent selection of shrimp, squid, octopus and lobster, as well as vegetable salads with addition of seafood. Copyright www.orangesmile.com
Excursion over cultural sights of Fuerteventura - 'must visit' points of interest
Each town of Fuerteventura has its own great attraction, so the island is ready to offer its guests an extensive cultural program. An interesting site is the Museum of Miguel de Unamuno …

Open
As for the vegetable dishes, baked potatoes in their skins remain the most popular and recognizable treat. The local soil is ideal for growing potatoes; it is boiled in salted water and served to the table with a fragrant garlic sauce. There are also entrees including nourishing stews prepared on meat broth, fish broth and a large selection of vegetable soups appreciated by vegetarians. 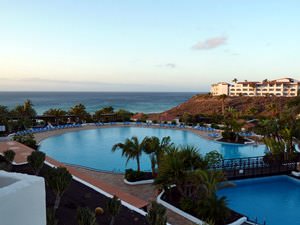 Spanish restaurants are common on the island. Tapas bars are also popular among holidaymakers. In restaurants of Spanish cuisine a decent selection of national dishes is represented; they serve great paella, traditional tortilla and popular tapas snacks. A pleasant surprise waits for sweet lovers on the island, as there they could taste the incomparable creamy dessert, bienmesable. It is made of rum, almond cream and honey; this tender dessert is simply irresistible. Another popular dessert is churra, flavorful donuts in chocolate, which are usually eaten for breakfast here.

This guide to cuisine and restauraunt in Fuerteventura is protected by the copyright law. You can re-publish this content with mandatory attribution: direct and active hyperlink to www.orangesmile.com.
Fuerteventura - guide chapters 1 2 3 4 5 6 7 8

Where to go for dinner in Fuerteventura: recommended cafe and restaurants

Within the gastronomic framework, Spain is one of the richest countries in the world. The variety of dishes in different regions is amazing. The traditional Spanish table is full of colors and incredible smells. The Basque country bordering with France, is dominated by a refined cuisine, specializing in seafood. In Aragon, locals honor and know how to cook meat superbly. In Galicia, it is obligatory to taste boiled octopus and pork legs with turnip. In Andalusia, which is the homeland of flamenco, incredibly delicious dishes are deep fried. This region is the birthplace of the best olive oil. Rioja and Navarre will surprise travelers with delicious side dishes. In Toledo, you should try the marzipan cooked following old recipes. … Open

Premier Inn, a popular British hotel chain, is offering an interesting job for the approaching festive season. In attempts to find something interesting and new for customers of its hotels in London, Dublin, Birmingham, and other cities, the company decided to hire five Christmas Market testers. The people who get this job will need to visit several locations in Europe, share their feedback on the selected Christmas markers, and prepare a list of hints and recommendations for customers of the hotel chain. Premier Inn, in its turn, will cover travel costs and will also provide some funds for the tester and his or her friend.

Searching where to eat - restaurants and cafe on Fuerteventura map

Cuisine and restaurants in the neighbours of Fuerteventura

Playa Blanca
To make it cooks use various types of fish, the fish soup with allmouth is considered the real delicacy. This fish cooking needs special abilities, because only tail’s meat can be used for food. People who want to treat themselves by delicious fish dishes will appreciate fish-moon; as a rule cooks prefer to cook it using the author’s recipes. Adherents of vegetarian ... Open »
Puerto del Carmen
You can order Conejo en Salmorejo for lunch. Pieces of a young rabbit are marinated in salmorejo sauce, fried and stewed. This dish is served on a large platter. Potatoes boiled in seawater are ideal as a side dish. It is also called papas arrugadas or patatas Canarias. It is usually eaten directly with the peel, pouring Moho sauce on top. It is worth noting that the most ... Open »
Lanzarote
The local cuisine is distinguished by plenty of simple and hearty dishes. National treats that are offered in local restaurants are more like a normal family food, rather than challenging gastronomic and drink specialties. Boiled potatoes and seasonal vegetables, meat soups, seafood and unpretentious fruit desserts - those are main national dishes, which are very popular among ... Open »
Las Palmas
Among European cuisine restaurants, guests of the island point out the Baluarte. Its chefs are perfect in both classic fish dishes and meat meals; fans of vegetarian food will be pleased with a large selection of vegetable soups and salads. No less popular is the Clandestino restaurant. During the day, it would be a great place for business meetings. In the evening the ... Open »
Gran Canaria
When it comes to meat dishes, marinated rabbit remains the undisputed leader here. The preparation of this dish has already transformed into a kind of a ritual. First rabbit meat is marinated with various spices and herbs, and then it’s cooked in clay pots. Sturdy potatoes boiled in salt water are traditionally served as a garnish for the meat. The potatoes look very ... Open »
Maspalomas
It is worth noting that the "tapas" culture is still less popular in local restaurants than in continental Spain. But in general, snacks are served in large quantities here. Not only tourists who want Spanish flavor, but also locals order them. Locals usually order snacks with Tropical beer. If you want to taste something truly island-like, you should order Arrugadas Tapas. ... Open »