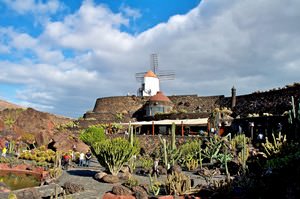 Lanzarote is a beautiful island with an abundance of natural and historical attractions. There are more than three hundred extinct volcanoes on its territory; it also has architectural monuments of different eras and unique historical sites. Since 1852, the island's capital is the city of Arrecife. Its territory is home to nearly half of island’s population. Travelers will be able to find in a lot of interesting shops and entertainment venues there. With sightseeing point of view the most interesting places are the port area and the fish market next to it.
Authentic traditions, festivals and lifestyle of Lanzarote inhabitants
The local people are very calm and unhurried. Travelers staying in Lanzarote sometimes find it very difficult to get used to the measured and unhurried pace of life. It is especially …

Open
Speaking of striking historical monuments it’s worth to mention Castillo de san Gabriel completed in 1573. The original building has existed for a brief period; after 13 years, it was severely damaged by fire. By the late 16th century, local architects managed to restore the castle; today it is home to the Archaeological Museum.
A historical monument of the later period is the fortress of San Jose constructed during the reign of Carlos III. It has remained unchanged for over than two hundred years. This fortress also hosts a popular museum with collections of sculptures and paintings, and other art works by contemporary artists. The house-museum of Cesar Manrique is a unique monument of architecture, known far beyond the island. It was built relatively recently, in 1968. Black basalt blocks were used to construct the main building, so the house looks fascinating. It has preserved in original form; in the museum you can see a collection of antique furniture and art, as well as antique interior decoration. Copyright www.orangesmile.com
Your active city break in Lanzarote. Attractions, recreation and entertainment - best places to spend your day and night here
The most popular resort of the island is Puerto del Carmen. It is characterized by an abundance of lively shopping streets, nightclubs and restaurants. The most attractive street for walking …

Open
There is also important excursion site in Teguise, Castle of Santa Barbara. This fortification was built in the 14th century and has saved the island from invaders once and again. Today, the ancient castle is home to the Museum of Canarian immigrants. During the visit you will learn a lot about the history of settlement and development of the island. The most important natural landmark of Lanzarote is the Timanfaya National Park located at the heart of the island. Travelers are attracted by mysterious volcanic landscapes of beautiful Fire Mountains. 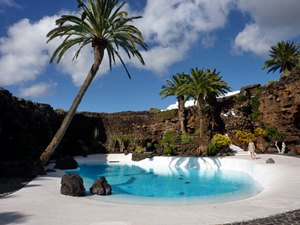 In Teguise, you will find the Museo Lagomar, one of the most extraordinary places on Earth. This is a mansion built right inside the rock - it seems as if it appears out of the volcanic crater. The history of the museum is even more interesting: The fact is that the villa was built in the '70s by the local architect Cesar Manrique specifically for the Egyptian actor Omar Sharif, however, being an avid gambler, the latter gambled the mansion away. In general, Cesar Manrique whose house is mentioned above actually "built" the whole island - many local buildings were built according to his projects, and particularly this building is considered one of the most brilliant creations of the author.
Advices to travellers: what you should know while being in Lanzarote
1. Currency exchange is most profitable in specialized exchange offices, which exist in all major cities of the island. You have to pay attention not only to the exchange rate, but also to …

Open
Another interesting place in Teguise is Iglesia de Nuestra Senora de Guadalupe, one of the island's most important shrines. It has two distinguishing features: the first is that the church is visible from anywhere on the island. The second is that the building itself is so original that it is quite difficult to determine its architectural style. The construction of the church dates back to the first half of the 15th century. Subsequently, it has been expanded several times, then burned in 1909 and restored anew. Since Teguise is the ancient capital of the island, here one can discover a lot of other interesting buildings - just take a walk along its main streets. 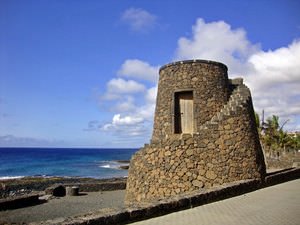 The unique Museo Atlántico located in Playa Blanca is a must-see point of any sightseeing route. It is an underwater museum, which can be visited as part of a dive group. Inside, you can find magnificent sculptures made in modern Spanish style. It is worth noting that this is one of the few museums in the world located underwater. In Playa Blanca, the castle Castillo de las Coloradas, one of the most ancient buildings on the island, is of special interest - it was built in 1402 with the advent of the first Europeans. Today, the fortress is considered one of the most prominent structures on Lanzarote, which has repeatedly defended the island from pirate attacks.
Best beaches and recreation areas around Lanzarote
Wonderful beaches can be called the main treasure of Lanzarote; these are created by nature itself. Scenic Playa Blanca in the southern part of the island is the most lively and popular …

Open
While in San Bartolome, one should not pass by Bodega El Grifo - Museo del Vino, where one can find wine production machines and learn a lot of interesting facts about how wine is made on Lanzarote. And, of course, local wine can be tasted at the end. The Museum Agricola el Patio operating on the grounds of an old farm is ideal for exploring rural life. Besides getting acquainted with the local culture and history, here you can taste wines, cheeses, and a “cherry on the cake” - cactus jam. 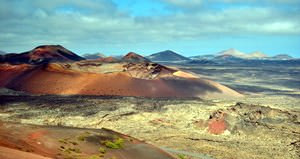 Jameos Del Agua is another creation by Cesar Manrique that must be checked out while on Lanzarote. This is one of the most picturesque areas on the island, which is a park built in a cave with an underground lake inhabited by crabs. Here you can also dine in a chic restaurant, which all fans of unusual places are eager to visit. All fans of natural attractions should think about exploring Jardin de Cactus located in Guatiza. By the way, this is another work of Cesar Manrique who created the perfect composition of cacti blooming almost simultaneously - a truly fascinating sight.

In the section below, you can get one of our excursion, activities or city discovery tours over Lanzarote and surroundings. Our website offers 10-30% lower ticket prices, when compared to the offline purchase on the spot.

City tours, excursions and tickets in Lanzarote and surroundings

This guide to cultural sights Lanzarote is protected by the copyright law. You can re-publish this content with mandatory attribution: direct and active hyperlink to www.orangesmile.com.
Lanzarote - guide chapters 1 2 3 4 5 6 7 8 9 10 11

What to visit during two-day excursion in Lanzarote

Photogallery of cultural heritage of Lanzarote

Excursions over cultural sights of neighbours of Lanzarote

Puerto del Carmen
If you want to see the architectural sights, you will have to go outside of Puerto del Carmen. Many interesting places are located about a 10-15-minute drive from the town. For example, fans of painting, architecture, and art should visit the house-museum of Cesar Manrique. It is located in caves near the town. Many architectural styles are intertwined in the design of the ... Open »
Fuerteventura
Travelers fascinated by architectural attractions like the picturesque village of La Oliva. The main object of a tour to these places is the governor's mansion; after a complete renovation the old building was open to public access. Nearby is the Church of Nuestra Señora de Candelaria, the main feature of which is an unusual square-shaped bell tower. The interior decoration ... Open »
Las Palmas
Theater-goers should visit the Perez Galdos Theater, which was opened in 1887. A few years after the opening of the theater, it was badly damaged by fire. It has been fully restored in a short time; today it is one of the most beautiful theaters in the country. In addition to classical performances, the theater often hosts concerts and important social events. A unique ... Open »
Gran Canaria
A lot of interesting excursion sites are located in the city’s suburbs. Fans of unhurried walks along the picturesque natural sites should not forget to make an excursion to the cave of La Cueva pintada. The inner walls of the cave are decorated with rock paintings. According to scientists, the age of some of the images found here is about two thousand years. The painting is ... Open »
Maspalomas
While walking in the historic district, consider visiting Degolyada de las Yeguas. This observation deck is an ideal place for admiring the panorama of Maspalomas. You will also see Fataga Ravine from Degolyada de las Yeguas, as well as other outstanding landmarks of the region. The picturesque historic district of the city is the location of another landmark - Enchidero. This ... Open »
Puerto de la Cruz
One of the most beautiful architectural monuments is Casa de la Real. In spite of the fact that it is the monument of the later period, this effective building looks quite harmonically next to old ones. A lot of historical houses were rebuilt to entertaining establishments and shops, and this fact makes the walking more pleasant. So, Casa de Miranda is another curious ... Open »

Culture guide to Lanzarote. Which fascinating sights to visit once you are in Lanzarote: temples, churches, museums, theaters and castles. Recommendations (with addresses, phone numbers and links) on the places 'must visit' in Lanzarote. Plan your own city excursion by using this page info!