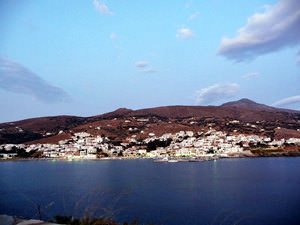 Andros is the second-largest island in the Cycladic Archipelago. Most tourists come here in the summer months. Various festivals and celebrations are held here at this time. In addition, the weather is conducive to a beach holiday in the summer season. This is what the island is so famous for. The island is quite popular with tourists. However, it has retained its identity. This is an authentic Greece with white houses, a slow pace of life, and a good-natured attitude to guests.
Best beaches and recreation areas around Andros Island
Travelers preferring to relax at quiet and picturesque sandy beaches would certainly enjoy Andros. Divers won’t be bored too, as there are many attractive places to dive just off the …

Open
The Greeks are very positive and sociable people. You will see groups of elderly Greeks who are discussing something enthusiastically, playing cards and drinking ouzo in the evening hours in any tavern on the island. The family plays an extremely important role for the Greeks. Continuity of generations and reverent attitude to traditions and culture exist here. For example, several generations of Greeks gather at the table in the same taverns. Collective singing of national songs will be the most common phenomenon here. Absolutely everyone is singing – old people, children, and even those who sit at neighboring tables.
You should not be surprised if you hear two Greeks loudly, almost shouting at each other, argue about something and at the same time furiously gesticulating. This is normal for the emotional residents of Greece. Siesta is a tradition that is observed by all residents. The streets are empty during daylight hours. It's really very hot on Andros in the summer. Therefore, this custom has been sacredly honored for centuries. Some lack of attention is also affecting the service. You should remember that the Greeks are not very mandatory. Punctuality is rare here. Copyright www.orangesmile.com
Top hotels in Andros Island for business trip or short vacation
Local hotels are ready to surprise tourists with incredibly welcoming and comfortable atmosphere. Many of them are situated in picturesque places, near the most popular beaches and …

Open
If you get to any feast on the island, whether religious or national, you will probably see many residents of Andros in national clothes. Patriotism and devotion to traditions is a characteristic national trait. The locals are proud of their origin. They honor the memory of their seafaring ancestors. National songs and dances are almost always given a place of honor in festive events. 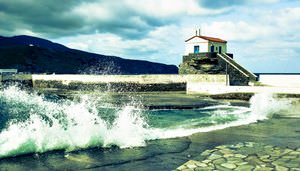 Major religious holidays are celebrated here. These are Easter and Christmas. In addition, each village has its own patronal feast in honor of the patron Saint. The Main Square or churchyard usually becomes the center of celebrations. Festivals in honor of holidays are called panegyris. Dances and musical performances are traditionally organized these days. Local residents also set tables and local housewives cook the best dishes. Of course, everyone drinks tsipouro or ouzo. Fairs are held in larger towns. You can buy products from local farms and artisan products there.
Guide to Andros Island sightseeing - things to see and to visit
Andros is the second largest islands among the Cyclades. It’s reasonably considered one of the most beautiful islands of the archipelago. There are beautiful mountain slopes covered …

Open
The holiday in honor of the myrrh-streaming icon of the Mother of God is celebrated on July 2. It is kept in the St. Nicholas Monastery. Hundreds of pilgrims from all over Greece and other countries come to the monastery on this day. A bright carnival with dancing, fancy dress, and fireworks takes place in Gavrio on Shrovetide Saturday. The procession of chariots is a particularly spectacular event. The patronal feast is celebrated on October 2 in Kypri. The residents of the village gather together and organize an indispensable feast. 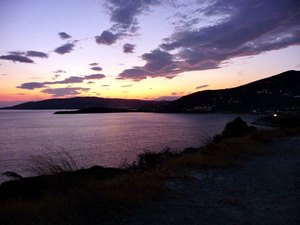 St. Nicholas Day is celebrated very beautifully in Gavrio on December 6. Students of local schools organize a torchlight procession along the main street. The main holiday is held in honor of the Assumption of the Virgin Mary on August 15 in Ammolochos. It is customary to visit each other and cook festive treats on this day. First of all, these are sweets. Dances to national music are arranged in the evening. The feast in honor of the Holy Theotokos Mother of God is the largest. The grand procession is held during its celebration. It takes place 16 days before Easter. It doesn't have an exact date.
Family holidays with kids in Andros Island. How to entertain your child, things to show to children.
You should travel to Andros with your children if you plan a quiet and relaxing holiday. There are no water parks or attractions here. But playgrounds for children are equipped in almost …

Open
The International Andros Festival is a major event. It is held from July 29 to August 25. This is a fairly new event. Numerous film screenings, theater productions, and musical performances are held in its framework on Andros. The open-air theater is the central venue of the festival. Teams from all over the world take part in this event. 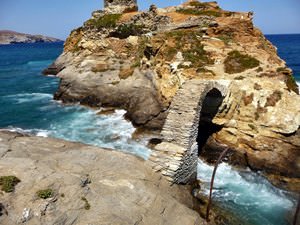 Gavrio again becomes the center of cultural life in early August. A number of events under the General name "Gavriotika" are held here. An exhibition of local artists and sculptors is organized and both serious and comic sports competitions are held. A noisy celebration with music, dancing, and food is arranged on the fifth day. Kakavia is a traditional festive dish of the festival. This is a special fish soup. Of course, there are local wine and ouzo at the celebration.
Cuisine of Andros Island for gourmet with top restaurants and cafe
Andros' cuisine is mostly traditional Greek. You will find Greek salad, assorted Mezedes snacks, souvlaki kebabs, and tzatziki sauce in almost any tavern. But there are also dishes that are …

Open
The new festival "Andros on His Feet" appeared on the island recently. It takes place in October. The festival attracts many hikers from all over Greece and visitors from other countries. Not only orienteering competitions and hikes and thematic lectures but also various musical and cultural events are organized during the festival. You can participate in a variety of activities and games for guests.

This guide to traditions and festivals in Andros Island is protected by the copyright law. You can re-publish this content with mandatory attribution: direct and active hyperlink to www.orangesmile.com.
Andros Island - guide chapters 1 2 3 4 5 6 7 8 9

Cathedrals and basilicas near Andros Island
♥   Cathedral of St. George, Syros, 47.2 km from the center. On the map

Survived castles around Andros Island
♥   Castle 'Exomvourgo Fortress' Exomvourgo, 42.9 km from the center. On the map 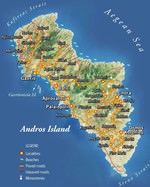 Colors of Andros Island in photos

Traditions and festivals in cities around Andros Island

Tinos Island
Social events also take place on the island. Several interesting festivals are held here. For example, the Artichoke Festival in the village of Komi is interesting. Tinos is famous for its artichokes. They are considered the best in Greece. Musical performances are organized, a fair is held and, of course, guests are invited to taste a variety of artichoke dishes during the ... Open »
Mykonos City
Like hundreds of years ago, craft traditions are cherished on the island too. There are a lot of interesting handicraft workshops. The locals make leather clothes and accessories that are famous for their high quality. Local craftsmen make interesting accessories only with their own hands. The most popular gifts are handicrafts of semi-precious stones. The locals have ... Open »
Mykonos Island
Local citizens can be hardly called workaholics. Siesta plays a great role here. Try to plan your shopping because almost all the shops are closed from 2 to 5 o’clock. Locals spend their free time sleeping or lying on the beach. It is customed in Greece to make the most of life. They won't spend much time trying to earn money and move up the career ladder. Greeks can easily ... Open »
Seriphos Island
When visiting a tavern, do not be surprised that people do not follow the rules of table etiquette. Serifos residents are not too scrupulous about the rules of behaviour when eating, and it does not matter if they have a business lunch or traditional dinner with friends. Laughter and lively conversations don’t stop even for a minute here. It is quite normal to drop the ... Open »
Naxos
Interesting entertainment and games are organized for children, and the time for a "potato party" comes in the afternoon. By tradition, a huge frying pan is installed in the main city square to fry a portion of potatoes. Several years ago, organizers of the holiday managed to fry 600 kg of potatoes at a time, and everyone could try a portion of hot fried potatoes for free. ... Open »
Sifnos Island
The Greeks like to drink. Alcohol is consumed in fairly large quantities but, nevertheless, you rarely meet drunken rowdies on the street. The point is the mentality: the loss of self-control due to a large amount of alcohol consumed is considered here a disgrace, and this applies equally to the Greeks themselves and to the tourists. The locals are great patriots of their ... Open »

Cityguide on traditions, mentality and lifestyle of people in Andros Island. Learn the best periods to visit Andros Island to discover its soul - authentic festivals, events and celebrations. We will also reveal the interesting habits, attitude towards the world and to tourists in Andros Island.