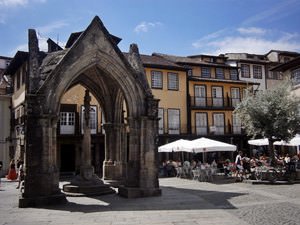 Guimarães is a unique city for Portugal. This is where its "birth" as a state occurred. This was possible thanks to Afonso Henriques who is called the "First King". He was lucky to be born in this beautiful city. It was he who proclaimed the independence of Portugal from Castile and León in the 12th century. Of course, the new king's hometown has become the capital of the new state. And though Lisbon has subsequently become the main city, locals are still very proud that Guimaraes had served as the capital, albeit for a short time. This fact is yet again evidenced by the inscription in the eponymous castle - Aqui Nasceu Portugal.
Guide to Guimaraes sightseeing - things to see and to visit
Guimaraes is located on the north-west of Portugal. This is an important historical city, which population estimates around 53 thousands of people. Guimaraes is known as the first capital of …

Open
Locals are good-natured, positive, and cheerful people. You can always ask for help if it's needed - they simply cannot refuse, it is against their principles. Friendship for them is not just a word, but “a way of life”. They know how to be good friends like nobody else and never leave a friend in need, even if requires sacrificing any principles. This is because friendship is one of the most important values in the lives of local residents. Just like the family, to which they devote much of their time.
Local cuisine is very diverse and satisfying. Must-try dishes include "cabrito asado" (roast lamb), "rojões" (pork with wine and spices), "arroz de cabidela" (poultry meat with rice), "bacalao asado" (baked cod), “tortas de Guimaraes” (puff pastry pies) and “toucinho do céu” (almond cake). Of course, the most popular alcoholic drink is port wine, which is widely associated with Northern Portugal. Copyright www.orangesmile.com
Cuisine of Guimaraes for gourmet with top restaurants and cafe
Each restaurant in Guimarães offers its guests interesting dishes from a variety cuisines of the world. Foreign tourists often prefer national restaurants to others, however, fans of other …

Open
Festivals taking place in the city invariably attract many visitors because Portuguese know how to party like nowhere else in the world. Due to this, everybody knows that a festival held in any Portuguese city will a priori be fun. Guimarães Jazz can be called the most famous event in the festival life of the city. This is one of the best jazz festivals in all of Europe, which has already won the hearts of many fans of this genre. Among its headliners are musicians who have already made a name for themselves. However, here you can also listen to those who are just starting their way on the world stage. The venue is Centro Cultural Vila Flor, which is located on Av. Dom Afonso Henriques 701. 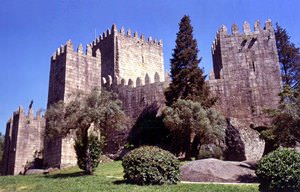 Another significant event in the cradle of Portuguese statehood is called Festas Gualterianas. The event falls on the beginning of August. The event is dedicated to the celebration of the patron saint of the city, Saint Gualter. Central streets, gardens, and sculptures at this time are consecrated with colored lights that adorn them like holy light protecting the city from all evils. The brightest activities held on this day include processions and a chariot parade, a craft fair with hand-made products, music concerts, fashion shows, horse racing, and festive fireworks marking the end of the event.
Excursion over cultural sights of Guimaraes - 'must visit' points of interest
Guimaraes never ceases to attract travelers with a variety of attractions, being one of the country's oldest cities with a rich and interesting history. The unchanged symbol of the city is …

Open
Festival of Nossa Senhora do Carmo is another interesting event taking place in the city. At this time, it is customary to make a pilgrimage to Mount Peña to pay homage to the holy patroness. The holiday is held on July 16. Besides the pilgrimage, festive activities include picnicking in the camping area with a very fun program, which is not complete without a positive mood, songs, and dances. Here you will find food stalls where you can buy some local specialties. In general, the holiday turns out to be welcoming and family-friendly. 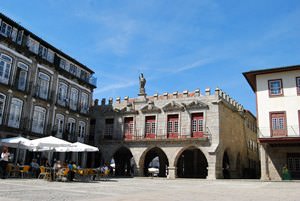 In September, all fans of the Middle Ages will be happy to witness the opening of Feira Afonsina where they can buy all kinds of attributes from the era when knights fought for the hearts of beautiful ladies. In general, at this time the city's atmosphere fully corresponds to those times. Only visitors' clothes and parked cars remind us that it's the 21st century. The fair has already won hundreds of fans around the world, those who love interesting things and a festive atmosphere, without which the fair cannot be considered open.
Your active city break in Guimaraes. Attractions, recreation and entertainment - best places to spend your day and night here
Guimaraes is a great destination for those who prefer ancient cities with their own history, atmosphere, culture. Indeed, this city has something to tell - there are more than enough …

Open
The city has two interesting festivals related to students. The first one takes place in late November and is called the Nicolini Festivals. At this time, at night you can see the colorful procession with the so-called "pine" followed by a week of parties. Then Maçãzinhas starts, which always falls on December 6. This is a kind of invitation for a date - during the festival, girls play the role of a window or balcony, which are presented apples on top of the cane by young men. If the invitation is accepted, girls give the apple back along with some surprise. In a word, the festival is an over 300-year-old tradition, which yet again confirms that tribute to the traditions is all for Portuguese.

This guide to traditions and festivals in Guimaraes is protected by the copyright law. You can re-publish this content with mandatory attribution: direct and active hyperlink to www.orangesmile.com.
Guimaraes - guide chapters 1 2 3 4 5 6 7 8 9 10 11

Cathedrals and basilicas near Guimaraes
♥   Sé Catedral de Santa Maria, Braga, 15.3 km from the center. On the map

♥   Sé Catedral de Santa Maria Maior, Viana do Castelo, 51.5 km from the center. On the map

Survived castles around Guimaraes
♥   Castle 'Castle of Guimarães' , 0.8 km from the center. On the map

Colors of Guimaraes in photos

Traditions and festivals in cities around Guimaraes

Braga
Gastronomic culture of Braga also has many interesting features. Despite widest choice of restaurants and cafes that can be found right at every step in the city, gourmets prefer to have a lunch at the monastery bakeries. Cooking connoisseurs are sure that the delicacies prepared in the local monasteries are simply fantastic. Unique "celestial" names of dishes make food even ... Open »
Porto
"Big Fountain" holiday, which is celebrated on May 1, remains one of the most unusual festivals of the city. Due to the climate a fairly dry weather prevails on the territory of the country, so since ancient times the natives have developed traditions of honoring "gods of water". The main aim of such celebrations was to ask gods to give people a rich harvest. However, the ... Open »
Vigo
Vigo is a city where people are always ready to help tourists if they face any troubles. The fact is that they have long been used to many travelers visiting their hometown, so assisting them is a kind of common practice. Locals consider themselves to be descendants of the Celtic Gauls (the name of the region of Galicia speaks about this). By mentality, they are strikingly ... Open »
Ourense
Gastronomic traditions are another important component of local culture. Locals are very fond of seafood and hold many food festivals throughout the year. Every autumn, a series of gastronomic festivals takes place in the region. In recent years. eminent chefs and gastronomy experts from around the world have been involved in most of them. For tourists, such festivals are an ... Open »
Galicia
Seafood for locals is not just daily food, but the most important national symbol too. Many indigenous people dedicate their entire life to seafood harvesting and making crafts of it; this important element of national culture simply couldn’t escape the attention of foreigners. Every year, O Grove Islands host the amazing Fiesta del marisco, which is visited by about 200,000 ... Open »
Leiria
For tourists, the festival is a great opportunity to buy unusual souvenirs as a keepsake of the trip. The selection of souvenirs at local fairs is huge, from traditional spices and handmade jewelry to rare delicacies and handicrafts made by local artisans. Such a beautiful historical festival is a chance to get acquainted with the centuries-old local customs. The summer ... Open »

Cityguide on traditions, mentality and lifestyle of people in Guimaraes. Learn the best periods to visit Guimaraes to discover its soul - authentic festivals, events and celebrations. We will also reveal the interesting habits, attitude towards the world and to tourists in Guimaraes.