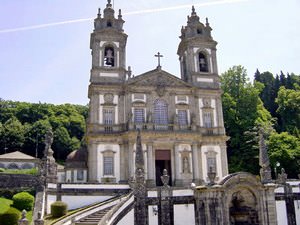 Beautiful cathedrals and churches remain the main attraction of Braga. Many of them were built yet in the beginning of the Middle Ages. The local citizens cherish the legacy of the past. Nowadays simply every church or cathedral of the city is home to unique religious artifacts. The historic part of the city is the most interesting one from excursion point of view. There is a beautiful park - Gardens of Saint Barbara - in the center of it. A large park with shady valleys and old trees will become a perfect destination for people who want to escape from the bustle of the city and enjoy the splendor of nature in its full.
Shopping in Braga - main shopping streets, outlets and boutiques
In Braga, there are many busy shopping streets and large trading complexes. Among the latter, Shopping Braga Parque is really worth highlighting. In this large and beautifully designed …

Open
The center of the park is the location of a beautiful cathedral. This is an amazing building in Romanesque style, the construction of which took place in the 11th century. Tourists should definitely not forget to explore the interior of the cathedral, which is always distinguished by an inexpressible atmosphere of harmony and peace. Walk through the park, and you will reach another attraction - the palace of the Archbishop. This is a large-scale architectural ensemble that consists of three buildings. The buildings were built at different times, but, despite the differences in architectural styles, the palace looks very harmonious. Thus, the oldest building is the east wing of the palace. It is a true example of the Gothic style. The central and the west wings of the palace were built during the medieval period and are made in the Baroque style.
A part of the palace’s premises is occupied by the oldest library in Braga. It stores ancient manuscripts, many of which are important historical documents, and approximately three hundred thousand books. The age of many books is more than one hundred years. Of course, these are not all places of interest that are recommended for visiting. Among newer religious monuments travellers are recommended to visit Misericordia, Santa Cruz and Sao Joao de Souto churches, the construction of which took place from the 16th to 18th century. One more well-known religious landmark of the city is located in a suburban district of Braga. This is Calvary Church of Christ. In order to reach the church, visitors will need to overcome a long zigzag ladder along which tourists will see numerous monuments, statues and even a miniature chapel. Copyright www.orangesmile.com
Guide to Braga sightseeing - things to see and to visit
Just like all ancient towns, Braga attracts visitors by its widest choice of interesting routes and great number of sights. This place can be relatively divided into Old Braga and New Braga. …

Open
Pius XII Museum is known as the most famous cultural institution in Braga. It exhibits a rich collection of archaeological finds and numerous objects of art. Noguera Da Silva Museum is also an interesting place named after the famous entrepreneur of the city. The museum’s extensive collection includes antique sculptures and paintings, beautiful antique furniture and other valuables. 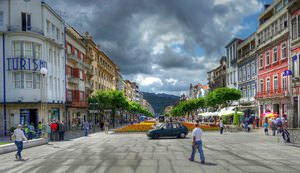 The Praça da República is a great place to take a walk. The abundant vegetation, beautiful fountains, as well as shops and restaurants located around it, all contribute to make your time here an amazing one. Here is mounted Monumento ao Papa João Paulo II, one of the most popular Popes in history. Another interesting building situated on the square is Coreto da Avenida, and you should not pass by it. On the other side of this building, we can see another one – Castelo de Braga. To be exact, it is just a preserved part of it – Torre de Menagem. The square is decorated with Arcada and is the busiest in Braga. It is often the venue for folk festivals and celebrations.
Cuisine of Braga for gourmet with top restaurants and cafe
The menus of the local restaurants dedicated to the national cuisine will definitely please fans of seafood and spicy dishes. Due to a huge selection of gourmet establishments fans of …

Open
Another nice street where you can take a walk is Rua do Souto. This is the main shopping street of the historical center of the city. Along the way, you can enjoy the magnificent views, wander into a cafe or restaurant where you can have great and tasty food, go further and enjoy sightseeing. Be sure to visit Bom Jesus do Monte. You can climb the funicular or the stairs so as to enjoy the incredible beauty of the building and Mount Espinho. It is worth pointing out that the place has its own mystical atmosphere. 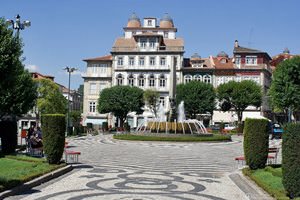 There are interesting fountains in Braga, and some of them are particularly impressive. There is, for instance, the Fonte do Campo das Hortas, which was originally built in the 16th century but was only installed on the Campo das Hortas in 1914. It was built in the baroque style. It is worth stating that the square itself deserves attention – even if it is not so noisy and fun here, this is precisely what makes it attractive, and you can sit in peace and quiet, without thinking about anything. The atmosphere that reigns here is unique – the rhythmical sound of the bell, and the quiet fountains. One more fountain Fonte do Ídolo is located in another part of the historic city, on Rua do Raio. It is remarkable that this monument of antiquity is preserved in the best possible condition above all others. It is believed that its construction dates back to the first century A.D, during the reign of Emperor Augustus.
Authentic traditions, festivals and lifestyle of Braga inhabitants
Residents of Braga are funny and positive people. They are very hardworking, but, just like others they like to relax. National holidays in Braga are always celebrated in a big scale and are …

Open
In Braga, there are other monuments of the ancient period preserved. For example, Termas Romanas de Maximinos, archaeological ruins, the progress of which you can observe if you are lucky. They were found in the year 1977. Nearby is situated the Archaeological Museum, where the main finds from the archaeological site are kept. Other places worth visiting while in Braga is the Prado Bridge. The building was built in the 16th century on a place where a Roman bridge stood previously. The bridge is fascinating not only because of its beautiful appearance but also because it is still operational, including for driving cars.

In the section below, you can get one of our excursion, activities or city discovery tours over Braga and surroundings. Our website offers 10-30% lower ticket prices, when compared to the offline purchase on the spot.

This guide to cultural sights Braga is protected by the copyright law. You can re-publish this content with mandatory attribution: direct and active hyperlink to www.orangesmile.com.
Braga - guide chapters 1 2 3 4 5 6 7 8 9 10 11 12
Reference information
Map of all palaces

Public palaces near Braga
♥   Palace 'Biscainhos Museum' , 0.3 km from the center. On the map

Cathedrals and basilicas near Braga
♥   Igreja da Misericordia, Penafiel, 40.2 km from the center. On the map

Photogallery of cultural heritage of Braga

Excursions over cultural sights of neighbours of Braga

Guimaraes
Guimaraes never ceases to attract travelers with a variety of attractions, being one of the country's oldest cities with a rich and interesting history. The unchanged symbol of the city is the Castle of San Miguel (Castelo de Sao Miguel), which was founded in the 10th century. The 18-meter-tall building consists of eight crenelated towers. The fortress was erected to protect ... Open »
Porto
Perhaps, a beautiful cathedral built in the 12th century is the most famous landmark of Porto. The religious site is located in the center of the city and has a very interesting story. More than 8 centuries ago a large fortress was standing on the site of the cathedral. Many times the fortress saved the residents of the city during the times of war. Later the building was ... Open »
Vigo
Start the observation of numerous sights of the city from visiting Bonin House. The beautiful mansion built in the beginning of the 20th-century is one of the most luxurious buildings of Vigo. The design of its facade is created by best masters, and in its inner premises simply every piece of furniture is a valuable museum item. Santa Maria Cathedral has been known as the main ... Open »
Ourense
An equally interesting religious monument is Iglesia de Santa Eufemia. This church was built in the middle of the 17th century on the initiative of one of the local communities. Interestingly, the church building was never completed, which does not prevent it from having a striking monumental appearance. Its beautiful arches and dome you can see today were created in the 19th ... Open »
Aveiro
A unique architectural monument is Se Catedral de Aveiro dating back to 1423. The townspeople consider this church to be the main one in the city. Actually, it is the only surviving part of the ancient monastery. In the 15th century, a big fire destroyed almost the entire territory of the monastery. Today, the still-standing temple is attractive with its amazing combination ... Open »
Galicia
Santiago de Compostela is the capital of the region. The Cathedral with relics of St. James the Greater is its main landmark. This unique religious monument attracting thousands of pilgrims to the city is interesting from an architectural point of view. In addition to this religious monument, the city has a very interesting ancient university, the scenic Gelmirez Palace and ... Open »

Culture guide to Braga. Which fascinating sights to visit once you are in Braga: temples, churches, museums, theaters and castles. Recommendations (with addresses, phone numbers and links) on the places 'must visit' in Braga. Plan your own city excursion by using this page info!