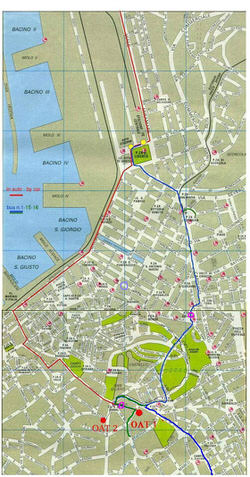 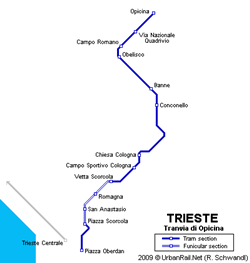 Interactive maps of hiking and biking routes around Trieste

1. You can zoom in/out using your mouse wheel, as well as move the map of Trieste with your mouse.
2. This interactive map presents two modes: 'Biking Routes' and 'Hiking Routes'. Use the '+' button on the map to switch between them.

This Trieste map has two modes: 'Railway Network' and 'Landscape & Rural Map'. Use the '+' button on the map to navigate.

Our guide to Trieste

The old part of the city is the location of numerous shops. Here you can also see street musicians and clowns who entertain passers-by and show their colorful performances to them. Your visit to Cathedral of St. Justus will surely become one of the most exciting excursions. The cathedral was built in the 14th century during the reign of the Austrian Empire. Via della Cattedrale is one of the most picturesque streets … Open

Not far from the castle there is the Victory lighthouse, the creation of world-renowned architect Arduino Berlam. This historic monument was built in memory of victims of First World War. Now it retains its navigation functions. In the center of Trieste there is one of the most important landmarks, Duomi di San Giusto. This religious building is about seven hundred years old. The cathedral was built on the ruins of … Open

Circolo ippico Alpe Adria Center organizes exciting rides affordable for absolutely everyone. Circolo ippico Alpe Adria Center also has a riding school. Travelers visiting Trieste in summer have to spend a day on a busy Barcola Beach. It is perfect for water sports and sunbathing; in cooler days locals and tourists come to the coast to admire the beautiful scenery or read a book sitting on the shore. The city has … Open

Continue tasting dishes of seafood in the Da Massimo restaurant; it has a rich menu and attractive prices. It serves excellent fish platter with a side dish of vegetables; chefs cook many signature dishes on the grill. The TNT pub invites visitors to drink a mug of their favorite beer and enjoy specialty treats. Despite the specialization, it is considered an excellent place for families. Branded burgers and a … Open

1. Travelers visiting the city for the first time have to look into one of the tourist centers. One of them is located near the waterfront; another tourist office operates near ​​Canale Grande. They serve clients seven days a week from 9:00 am to 7:00 pm. You can book a tour and clarify questions about the city in those centers. 2. Thrifty travelers should be aware that the city has a lot of attractive budget … Open

Maps of Porec
Porec is noted for a great row of night amusements, there is number of bars, clubs and discos in seaside territory. Among them there is club General Lounge, which is noted for friendly and kind atmosphere. This club is located in several steps from seaside, in the evening it organizes interesting thematic parties, great assortment of dishes and drinks is available for guests. ... Open »
Maps of Opatija
The most popular escape club is Fox In A Box where players can choose from two rooms: one offers participants to rob the Central Bank, the other - to escape from the prison. Scenarios offered by the club are non-trivial and will appeal to both beginners and experienced players. As for time limits, visitors will have 60 minutes to solve the puzzle using their ingenuity only. ... Open »
Maps of Istria
Istria beaches deserve special attention. Despite the fact that most of them are artificial, environmental performance of popular beaches remains on top. Here you can relax safely and comfortably even with young children, as these places feature beautiful nature and excellent climatic conditions. There are also magnificent diving centers in Istria; they arrange trips to the ... Open »
Maps of Rovinj
During a tour travelers will have an opportunity to estimate a diversity of local flora and fauna and visit a local museum. Tours to the island are organized regularly in the port area. Getting to the island in a big beautiful ferryboat will charge tourists with brightest impressions. In the suburban districts of Rovinj travelers will discover a number of remarkable natural ... Open »
OrangeSmile.com - online travel reservation expert providing reliable car rental and hotel booking services. We feature more than 25.000 destinations with 12.000 rental offices and 200.000 hotels worldwide.
Secure Server