Preparing your trip to Trieste: advices & hints - things to do and to obey 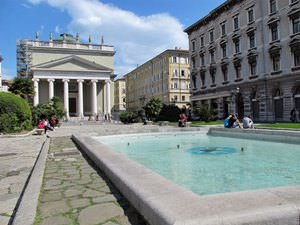 1. Travelers visiting the city for the first time have to look into one of the tourist centers. One of them is located near the waterfront; another tourist office operates near ​​Canale Grande. They serve clients seven days a week from 9:00 am to 7:00 pm. You can book a tour and clarify questions about the city in those centers.
2. Thrifty travelers should be aware that the city has a lot of attractive budget hotels. Many of them are located in the downtown; regardless of the location the price in such places has always remained at an attractive level.
3. Holiday-makers should take into account that locals speak a special dialect. Often it is difficult to understand even for those who are fluent in Italian, but in major hotels and entertainment venues staff speaks foreign languages.
4. The city has an excellent public transport system; its main representatives are buses and trams. They can easily reach any area of ​​the city, but many sightseeing fans prefer strolling Trieste on foot to see all the important sights.
5. You can easily get from Trieste to nearby major cities. There are daily buses to Ljubljana, Dubrovnik, Zagreb, Sofia and Belgrade departing from the bus station; fares are very attractive. Copyright www.orangesmile.com
6. The high tourist season is from May to October, at this time there is the most favorable weather for the rest. Most travelers visit Trieste in summer, so fans of quiet rest are advised to plan a trip during the off-season.
7. Beach lovers should take into account that the local beach is divided into two parts, male and female. This beach is the only one of its kind in Europe.
Your active city break in Trieste. Attractions, recreation and entertainment - best places to spend your day and night here
It’s worth to start a story about entertainment places of Trieste with Civico Acquario Marino. It is an amazing place that will be interesting for all family members. This aquarium is …

Open
8. Travelers limited in time would be interested in traveling by local trams. Most of their routes include most remarkable and beautiful places of the city, so a usual trip by public transport would turn into a fascinating tour.
9. Fans of gastronomic tourism certainly have to taste specialties of pork in local restaurants. As experienced gourmets tell, they feature simply incomparable taste.

Preparing your trip to Trieste: advices & hints - things to do and to obey You can re-publish this content with mandatory attribution: direct and active hyperlink to www.orangesmile.com.
Trieste - guide chapters 1 2 3 4 5

What to visit being in Trieste - unique sights

Distance from Trieste center - 32.7 km.
Despite the complicated situation, the clever robbers in the 17th century managed to get into the castle. They stole many valuable things. After that, the castle owner had the secret Vipavsky gang built. For years, only a few people knew the way to the castle. Unfortunately, the secret passage to the present has not been preserved. The modern visitors enter the castle dungeon through the upper corridor, which begins high in the mountains and is laid out through the forest. … Read further

Tips for the cities around Trieste

Porec
3. Motor-car enthusiasts who are going to get to the neighboring cities need to remember that the majority of roads are paying. At the same time quality of the local roads are excellent, so this fact makes travels more comfortable and safe. 4. It is recommended to buy food in one of the local markets. As a rule farmers from the nearest towns work there, so their product is ... Open »
Opatija
3. The hottest months of the year are considered to be July and August. This period of the year will be favorable for beach leisure fans. Opatija features favorable climate as even in winter the average temperature does not go below 10C. 4. Ladies should avoid city exploration alone as in this case they should be ready to get into focus of attention of local men. 5. Many ... Open »
Istria
3. Foodies should pay attention to konobas, national cuisine restaurants, where you can taste the most popular treats and the best wines. The cost of such specialties in restaurants rarely exceeds 10 euros; there are konobas in all cities of the region. 4. Trips to Venice and Trieste are arranged for travelers. Those who want to visit these cities have to consider that visa ... Open »
Rovinj
3. Shops are usually open at 8 am at the latest, and work till 8 pm. Sundays and Saturdays are commonly the shortened working days, some small shops can be closed these days. During the tourist season shops can change their working schedule fitting in tourist demands. 4. City guests have an opportunity to rent a car. To rent a vehicle one will need international driving ... Open »
Ljubljana
3. The city has adopted the cashless transfer system. The large restaurants, banks and filling stations accept international credit cards. One will need cash for local market places as well as for small budgetary cafes and restaurants. 4. The city is highly recommended to be cruised on foot as in such a way one will have a chance to visit all the significant landmarks and ... Open »
Novo Mesto
3. In Novo Mesto, you can choose from many special hotels occupying outstanding historic buildings. If you book a room well in advance, you can count on pretty affordable prices even in such hotels. 4. The most attractive for gourmets are restaurants specializing in regional cuisine. Guests will be pleased not only by a rich menu but also by reasonable prices. 5. ... Open »

Travelling to Trieste - advices and tips. What should be provisioned in advance, the rules you might want to follow, and the things you better avoid doing in Trieste. We help you to make your trip smooth and easy, with no unexpected surprises.