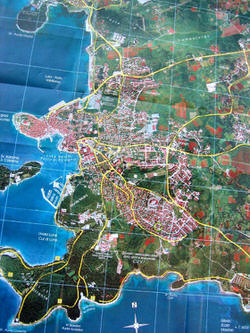 Interactive maps of hiking and biking routes around Rovinj

1. You can zoom in/out using your mouse wheel, as well as move the map of Rovinj with your mouse.
2. This interactive map presents two modes: 'Biking Routes' and 'Hiking Routes'. Use the '+' button on the map to switch between them.

This Rovinj map has two modes: 'Railway Network' and 'Landscape & Rural Map'. Use the '+' button on the map to navigate.

The second largest airport in the country is Osijek. It accepts a small number of international flights, but is very popular among tourists. It is best to book a transfer from the airport in advance, since a taxi ride will cost several times more. On the territory of the airport there are Duty Free shops, bank offices, cafes, bars and restaurants, as well as places for rest and parking. Pula is the most popular seaside airport. It is located 7 kilometers from the city. You can get there by taxi or by transfer. The airport runways are designed for receiving such larger aircrafts as Boeing and Ilyushin il 86. The carrying capacity of the airport yearly is at least half a million passengers. … Open

A huge number of festivals take place in Croatia every year. Most of them are held at various venues in Zagreb. In April, the Music Biennale, a festival of classical music and folk culture, is held in the capital. For several days, musicians and orchestras perform on different venues. The event ends with a grandiose gala show. In June, it is worth to visit the Flora Art exhibition in Zagreb. There, rare plants, trees and flowers are presented to the public, as well as an accompanying equipment for gardening. In autumn, Zagreb hosts the International Festival of Puppet Theaters, Jazz Days and the International Fair. In Rovinj, in early May, the famous Rovinj-Pesaro Regatta, which gathers athletes from different countries, starts. From the 14th century, competitions for shooting arbalets are traditionally held on the small island of Rab. Everyone can try their hand. Another bright event is the Dalmatian corrida in the mountain village of Radoshich. Animals are fighting not with a bullfighter, but with each other. The show is pretty cruel, but extremely impressive. The carnival in Dubrovnik is one of the most spectacular processions in the whole country. It starts on the main street of the Old Town, which is famous for its stone panoramic vaults. The lane has a limestone pavement. On the first day of the carnival, entertaining performances for children are arranged. At the rest of the time, costumed processions pass through the streets of the city. The carnival ends with a party that lasts until the morning. … Open

Our guide to Rovinj

An interesting cultural institution is the Batana House Museum. It is a small establishment on the water dedicated to an ancient fishing boat - the battalion. For several hundred years, it has remained an indispensable fishing tool for local fishermen. Museum visitors will have an opportunity to learn numerous facts about these boats that haven't changed externally over the past centuries. Fishermen continue to use … Open

3. Shops are usually open at 8 am at the latest, and work till 8 pm. Sundays and Saturdays are commonly the shortened working days, some small shops can be closed these days. During the tourist season shops can change their working schedule fitting in tourist demands. 4. City guests have an opportunity to rent a car. To rent a vehicle one will need international driving license. Some renting centers … Open

Apart from favorite pizza treats its clients can order various fresh salads and spicy garnishes, the menu of the Da Sergio pizza house offers a rich assortment of desserts as well. One of the main features of this restaurant is enormous pizza’s size. Considering affordable pricing policy this gastronomy establishment turns to the most popular place to eat in its trend. The Orca restaurant offers a vast range of … Open

Next to the city center travelers will find one of the most popular entertaining establishments being the Rovinj Aquarium. In spite of its small scale (in comparison to other known aquariums of Europe), it is noted for a great collection of sea habitants and its fantastic design. Bright fishes, starfish, octopuses and beautiful sea shells will turn a visit to this oasis of marine world into an unforgettable … Open

Near the basilica tourists will find another remarkable construction being the Church of the Holy Trinity. It has been preserved in its initial look till present days. Its building presents a unique fusion of Romanic and Gothic styles. At present time this church hosts an art gallery, where tourists find and observe works of local artists. The age-old Church of Our Mother of Mercy is the next recommended landmark to … Open

The main square of Rovinj was named in honor of Marshal Tito. You will find this square near the port area. Several notable buildings are located around the square. Town Hall and Palace Kaliffi are among them. The walls of the palace store the exhibition of the museum dedicated to the history of the city; visiting this museum should be a mandatory point of any excursion program. Art-lovers simply have to make a … Open

Maps of Porec
Assortment of entertainments for sports lovers is very big, there are more than 150 tennis courts on the city’s territory. The favorite tourists’ amusements are bicycle travels, almost all existed types of sportive entertainments are available for Porec’s guests. Bicycle trips to Baredine Cave are very popular, travelling along its picturesque grottos is very impressive. ... Open »
Maps of Istria
There are some great wineries in Istria; a visit there will make a holiday even more pleasant. Locals gladly welcome guests from other countries, get them acquainted with the winemaking tradition and offer to try the most popular varieties of drinks. Guests of Istria can try literally any entertainment from extreme gliding and usual beach volleyball to training on upscale ... Open »
Maps of Cres
Locals believe that you can hear the sound of a bell from the bottom of the lake. According to the legend, there were two rich sisters who owned a castle. One of them wanted to own all the possessions and she killed her sister. She was punished for cruelty and severe earthquake and a flood destroyed the castle. This is how the lake appeared. Moreover, it is said that you can ... Open »
OrangeSmile.com - online travel reservation expert providing reliable car rental and hotel booking services. We feature more than 25.000 destinations with 12.000 rental offices and 200.000 hotels worldwide.
Secure Server