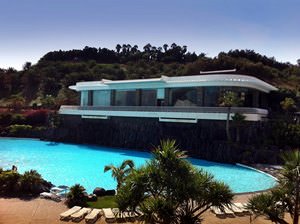 There are several status hotels in Spain that have become famous all over the world thanks to the special attention paid by celebrities. In the 80s, the legendary Queen band shoot one of its video clips at the Ibiza Rock House. That event gave the hotel the world-wide fame and made it one of the most popular in Ibiza. In Madrid, celebrities like to stay at the Hotel Villa Magna. Lady Gaga, Robbie Williams, musicians of the U2 were among its guests. The famous sail-shaped Hotel W is situated in Barcelona, by the sea. Its panoramic windows offer a breathtaking view of the coast. The unusual shape of the hotel has made it one of the most recognizable in the capital of Catalonia. . This fantastic hotel is open in the building of 1929 that was constructed for the World Fair. Starting from the opening and till the end of the 60s of the previous century, the luxurious building was hosting numerous banquets, events and celebrations. Later, it was transformed into a cinema studio. In 2006, the unique historic building was turned into a hotel that is currently known as one of the most luxurious and romantic places in Barcelona.
Check the hotel prices and availability
Las Casas de los Mercaderes, Sevilla The history of Las Casas de los Mercaderes

is incredibly interesting. It is open in a 18th-century building that was thoroughly restored. More than 200 years ago, a large shopping center was open in the building, one of the oldest not only in Spain but also in Europe. As a reminder of the past of the building, Las Casas de los Mercaderes still has the unique interior design with high arcs, marble columns, and a charming inner yard with the glass roof decorated with colorful leaded panels.
Check the hotel prices and availability
Copyright www.orangesmile.com , which is open in an eye-catching palace that dates back to the 18th century, is also an important city landmark. The hotel is also famous as a toreador meeting place. More than a hundred years ago, they chose the hotel’s elegant restaurants to relax. Nowadays, the two restaurants of Vincci La Rabida serve Andalusian cuisine and are always present in the list of best restaurants in Seville. The El Mirador offers a breathtaking panoramic view of the Cathedral. Guests can always admire the central part of Seville from a spacious terrace on the roof of the hotel.
Check the hotel prices and availability , which is located in the area of Ramble, is full of interesting facts. This hotel is located in the renovated palace of El Regulador. More than a hundred years ago, one of the most famous jewelry workshops in the city was located in the palace. Later the workshop was closed and Masriera Museum of Jewelry was open instead of it. However, not many years ago the palace was transformed into a hotel. Hotel Bagues has only 30 guestrooms, and all of them are decorated with unique jewelry from the museum. The design of rooms simply strikes visitors with its luxury – furniture made of ebony wood, antiquities and gilding can be found everywhere.
Check the hotel prices and availability has been greeting its guests since 1857. Besides the king of Spain, such famous people as the Queen of Belgium and Prince de Galles stayed at the hotel. These days, more than a hundred years later, the design of the iconic hotel has almost not changed. It’s a fantastic opportunity to spend several days in gorgeous guest rooms that were used by members of royal families in the past. The design of the hotel is unique and made in an irresistible Irish style. Legendary The trinity pub has also been open for more than a century. It has already become one of the main symbols of Seville, so gourmets from all over the world visit it to try best sorts of Irish beer and whisky. As the hotel exhibits a large collection of old paintings, it’s very popular with art connoisseurs.
Check the hotel prices and availability is located approximately 300 metres above the sea level, so guests of this hotel will be able to enjoy magnificent panorama of the city and the Mediterranean Sea. Because of such a unique location, this hotel has always attracted travellers who value the beauty of nature, fresh air and unhurried leisure relaxation. During its long history, the white mansion served such guests as Ernest Hemingway, the king of Belgium, James Stewart and George Sanders. Spacious guestrooms of the hotel feature elegant design and support of latest technologies. The historic building is surrounded by beautiful terraces and gardens made in accordance with projects of famous masters. Sculptures, paintings, old photos of the hotel that date back to the 30s of the previous century only add to the overall special atmosphere of this place. Gran Hotel La Florida will be a perfect choice for travellers who want to stay at “a house with history”.
Check the hotel prices and availability , is open in Seville. It was constructed in 1928 by order of the King of Spain Alfonso XIII. Ever since the opening, the hotel was named after the king. Hotel Alfonso XIII is open in a magnificent palace in the Mauritian style. The design is a striking combination of precious accessories and artworks. Right after the opening, Hotel Alfonso XIII got the prestigious title of the Europe’s most luxurious hotel. Nowadays, many years after, it is still known as one of the most prestigious and elegant hotels in the world.
Check the hotel prices and availability
Le Meridien Barcelona, Barcelona Prestigious Le Meridien Barcelona

has been famous for many years. Starting from 1957, numerous famous singers and actors stayed at this hotel. Because of that, Le Meridien Barcelona received another informal name – “star hotel”. Such celebrities as Madonna, Pavarotti, Julio Iglesias, Rostropovich, Rolling Stones and many more were among clients of this hotel. The magnificent mansion with elegant interior and wonderful design will be certainly remembered, and you will want to return there for your next vacation.
Hotel Majestic, Barcelona Well-known far beyond the borders of Barcelona, Hotel Majestic

has proved its title of the best hotel since 1993. For more than 94 years this classic five-star hotel has greeted its guests. Hotel Majestic is distinguished by marvelous design, charming atmosphere and elegant guestrooms. Inner premises of the hotel are also used as a private gallery, so guests are able to see works of many talented artists. This hotel was chosen by such famous people as Dalai Lama, Milos Forman, Jean-Paul Belmondo and Catherine Deneuve during their stay in Barcelona. The hotel tries to keep highest standards in everything, remaining an oasis in the middle of the bustling city.
Catalonia Portal de l Angel, Barcelona Catalonia Portal de l Angel

, which was open in 1872, is an important historic symbol of Barcelona. The building of the hotel is a true historic landmark, and it was constructed in accordance with a project of famous architects. Nowadays, more than a hundred years after the construction, the magnificent building of the hotel has kept its original look in nearly pristine condition. A great example of neoclassical style, the building still has antique marble ladders and a wonderful inner yard. The Angel Garden, one of the most beautiful gardens in the city, is also located near the hotel. The 600 sq. metre large garden is an excellent place for relaxation and walking.
This article about famous hotels of Spain is protected by the copyright law. You can re-use the content, but only under the condition of placement of an active link to www.orangesmile.com.
Spain guide chapters 1 2 3 4 5 6 7 8 9 10 11 12 13 14 15 16 17 18 19 20 21 22 23 24

Photogallery of architecture of Spain

Barcelona
Well-known far beyond the borders of Barcelona, Hotel Majestic has proved its title of the best hotel since 1993. For more than 94 years this classic five-star hotel has greeted its guests. Hotel Majestic is distinguished by marvelous design, charming atmosphere and elegant guestrooms. Inner premises of the hotel are also used as a private gallery, so guests are able to see works of many talented artists. This hotel was chosen by such famous people as Dalai Lama, Milos Forman, Jean-Paul Belmondo … Read more

Sevilla
During its long history, the gorgeous hotel greeted members of royal families and famous people. Even after numerous reconstructions, Hotel Alfonso XIII still has the carefully preserved 200 square meters large royal suite. Don’t forget to visit the charming Andalusian inner yard that has already become one of main advantages of the hotel. Nowadays, San Fernando restaurant that offers finest national cuisine is open in the yard. The legendary hotel Inglaterra has been greeting its guests … Read more

Map of legendary hotels in Spain