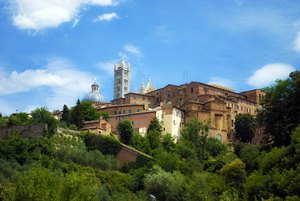 Every year on March 19 Siena celebrates a beautiful holiday with a long history, the Feast of St. Joseph. The story of a festival is quite interesting. The first time it was started back in the Middle Ages. The severe drought has fallen on the town; locals were about to lose all crop and starve. In a difficult situation they’ve sent a prayer to Saint Joseph, who had heard them and sent the long-awaited rain. The crop was saved, and to celebrate this joyous occasion citizens feasted on streets of Siena.
Cuisine of Siena for gourmet with top restaurants and cafe
Siena is an attractive city with a medieval atmosphere. It is famous for its interesting culinary traditions. The main feature of the local cuisine is an abundance of sweets, as city …

Open
They put up long tables with lots of treats along the streets and feed homeless and needy. The tradition of street banquets has preserved to this day; as many years ago, today the festival can’t be imagined without an abundance of treats. One of the most popular and beloved delicacies are considered small rice balls named ‘fritelle,’ which are fried in oil – it explains the peculiar name of the dish.
Children are fond of the Feast of Saint Joseph, because in the festive day, according to another good tradition, parents should buy them new toys. During the festival, streets of the city host colorful fairs and shops, where you can buy local dolls and other toys. They would become wonderful memorable souvenirs; guests of the festival can acquire local cookies and other sweets as souvenirs too. Copyright www.orangesmile.com
Excursion over cultural sights of Siena - 'must visit' points of interest
The most recognizable symbol of Siena is its beautiful cathedral. Construction of the church has begun in 1179 and lasted for several hundred years. The Cathedral impresses with its elegant …

Open
Locals are proud of their history; cultural traditions of their ancestors are treated with great trepidation. Siena is one of the few cities in the country in which there is a unique atmosphere of the Middle Ages. Travelers who visit the city in summer will also be able to witness the interesting national celebration, the Palio festival. The most spectacular event is a horse racing, which is carried out in the main square of the town. 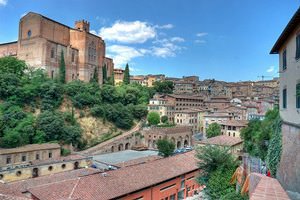 After the competition, festive marches are held on a town’s street. An entertainment program ends late at night. Typically, Palio is celebrated twice a year - in early July and mid-August. Among other features of Siena, lively and fun atmosphere of the city streets is worth mentioning. The fact is that one of the most prestigious universities in Europe is situated here, so during the school year a significant portion of its residents are students.
Your active city break in Siena. Attractions, recreation and entertainment - best places to spend your day and night here
Entertainment that can be offered by Siena to its guests is no less diverse than the cultural program. Those who are fond of outdoor activities should definitely visit La Foce Garden. …

Open
You can truly experience the atmosphere of the Middle Ages at the beginning of July when the festival Monteriggioni di Torri si Corona takes place. As you can understand, the castle with the same name is the venue of the festival. During this time a colorful program is organized for visitors, including musical performances by folk groups, tasting local dishes, as well as interactive entertainment for young visitors to the festival. Here, within the walls of a medieval castle, the atmosphere of approaching history is felt much closer. In addition to the musical and gastronomic components, the program includes theatrical shows and art installations that are created by talented artists. 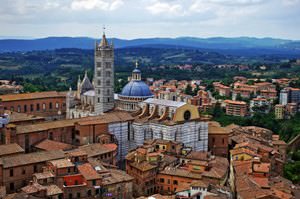 The La Disfida della Valdelsa event, held in early June in the open-air museum of Parco Archeologico di Poggibonsi, is another interesting festival. The festival is a kind of “discovery” of the grand event Monteriggioni di Torri si Corona, but it offers an equally rich program. This includes knightly tournaments and buhurts, the reconstruction of the Battle of Colle di Val d'Elsa (it is worth noting that such events especially impress the young visitors of the festival), craft fairs, tasting dishes of medieval cuisine, and falconry. To further highlight the atmosphere of the Middle Ages, participants and visitors of the event change into medieval vestments and the knights are fighting for the colors on coat of arms, divided into two teams: the color of the Poggibonsi dynasty against that of Monteriggioni.
Advices to travellers: what you should know while being in Siena
1. Travelers who plan to rent a car have to consider that there is a shortage of free parking spaces in the city. Some of the best car parks are located near Fortezza Medicea and next to the …

Open
The beginning of September marks the conducting of another medieval festival called Medioevo in Rocca. Traditionally, the venue for the event is the castle Rocca di Montestaffoli, which is located in San Gimignano (a town in the vicinity of Siena). This is one of the most colorful carnivals of Tuscany with its own special flavor. The procession through the main streets has as participants, people who do not just wear medieval clothes but copy some noble person from the Middle Ages. In addition to the magnificent parade, visitors can expect wonderful exhibitions, crafts fairs, as well as musical and theatrical performances. A special menu from restaurants and bars is another distinctive feature of the festival. However, all the locals carefully prepare for this day, and it is rather difficult to meet someone in modern clothes. 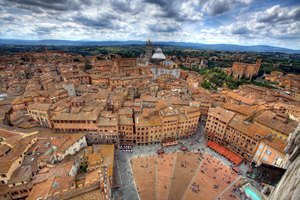 Siena is not known to host only medieval festivals – music is equally loved here. A confirmation of this is the Torrita Blues Festival which starts at the end of the first summer month in the nearby town of Torrita di Siena. At this time, on a specially equipped stage in the Piazza Matteotti Square, blues and jazzmen, as well as gospel performers, come from all over the world to perform. Another festival that impresses music lovers is Siena Jazz, held in late July in one of the main attractions of the city – Fortezza Medicea. In addition, open-air concerts can be seen on the main streets of the city. Local and foreign musicians also perform here.
Guide to Siena sightseeing - things to see and to visit
Siena is a medieval city that carefully keeps the traditions of ancient times. It is situated on three hills. This fact creates the impression that Siena is divided into three small towns. …

Open
Like in any other Italian city, wonderful gastronomic festivals are held here. Such as, for example, Festa dell'Uva e del Vino, which takes place at the end of September, marking the conclusion of the grape harvest and the beginning of making wine from it. The brightest events related to the collection of the product (tasting of drinks and farm products, themed excursions, interactive contests) are held in the surrounding town of Chiusi. Yet another interesting culinary event is Sagra della Bruschetta, the venue of which is the town of Monti, in Chianti. The festival is dedicated to bruschetta, which needs no introduction, being one of the most recognizable dishes of Italian cuisine. In addition to tastings, visitors can appreciate live music.

This guide to traditions and festivals in Siena is protected by the copyright law. You can re-publish this content with mandatory attribution: direct and active hyperlink to www.orangesmile.com.
Siena - guide chapters 1 2 3 4 5 6

City tours, excursions and tickets in Siena and surroundings

Cathedrals and basilicas near Siena
♥   Basilica dell’Immacolata (S. Clemente dei Servi), Siena, 1 km from the center. On the map

♥   Basilica Cateriniana di S. Domenico, Siena, 1.9 km from the center. On the map

♥   Abbazia di Monte Oliveto Maggiore, Chiusure, 22.2 km from the center. On the map

♥   Castle 'Castello di Meleto' Gaiole in Chianti, 16 km from the center. On the map

♥   Castle 'Castello di Staggia Senese' Poggibonsi, 18.1 km from the center. On the map

♥   Castle 'Castello di Montebenichi' Bucine, 18.6 km from the center. On the map

♥   Castle 'Castello della Magione' Poggibonsi, 22 km from the center. On the map 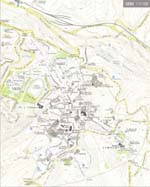 Colors of Siena in photos

Traditions and festivals in cities around Siena

Tuscany
The festival starts on the last Friday of September and lasts for 7 days; local potters and blacksmiths, lace makers and wood carvers, goldsmiths and other craftsmen take part in the holiday. During the event, there is an interesting trade fair, where you can see the most interesting works of artisans and buy your favorite things. Everyone interested in learning the art of ... Open »
Arezzo
The nearby town of Lucignano also has an interesting celebration - Maggiolata Lucignanese that is held on last two Sundays of May. The Maggiolata is an ancient celebration that is linked to an old Tuscan tradition of greeting the new summer season and saying goodbye to the winter. The Roman church adopted the pagan tradition of asking supreme forces for a good harvest and ... Open »
Florence
Perhaps, temperament is the main national feature of local people. They are also quite expansive and are very sociable. Local residents are very flattered when visitors are interested in sightseeing, show excitement towards the local culture and observe historical monuments enthusiastically. If a tourist is able to surprise the locals by his/her knowledge of the city’s ... Open »
Perugia
One of the most waited Perugia holidays among foreign guests is the Eurochocolate Festival. The festival was first held in 1994. The sweet holiday takes place in October. For the last several years the festival has been visited by more than a million of foreign guests. The event engages more than 150 world renowned companies and chocolate producers. The main event of the ... Open »
Pisa
The holiday is opened with a grand parade which is followed then with the main entertaining event of the day being a boat race. The regatta is an impressive and rather emotional event which will be of great interest for all tourists and city guests. The name of the patron saint is associated with another bright festival which is the Luminara di San Ranieri which is celebrated a ... Open »
Viareggio
In the memory of that brilliant event was organized a parade of carts in Viareggio, which has been celebrated till our days. As a rule, figures of famous politicians and stars are put in these carts. For many years Burlamacco has remained the main symbol of the holiday. The author of the fantastic character is a famous Italian painter Uberto Bonetti. Burlamacco appeared in ... Open »

Cityguide on traditions, mentality and lifestyle of people in Siena. Learn the best periods to visit Siena to discover its soul - authentic festivals, events and celebrations. We will also reveal the interesting habits, attitude towards the world and to tourists in Siena.