Salina citizens have a relaxed way of life. Italians don’t like to hurry and they prefer to make the most of life. But small islands are filled with a peaceful atmosphere. Mealtime has great importance for Italian people. Dinner is more important than supper and a glass of wine is its essential part. People often meet with friends or colleagues for a meal, it is an important part of a good day. Despite the fact, that Italians are family people, they try to become acquainted with new people and maintain these relations.
Shopping in Salina Island - main shopping streets, outlets and boutiques
People try to buy something memorable during their holidays. However, some tourists try to choose souvenirs, which can be used in everyday life. If you don’t like to waste your money, …

Open
They won’t speak openly with strangers. But if you become a friend for a local resident, be sure to know the island from another side. Italians like to talk on different topics, such as Kant’s philosophy or modern cinema and football. It is customary to take care of your family and help to distant relatives. There is a joke, that locals prefer to be friends with foreigners because they live far away and you don’t have to help them.
One of the main Italian characteristics is their clan system. Many of the local shops have been owned by the same family for generations. Local residents marry late and live with their parents up to thirty. Moreover, even when they have created their own family, they never forget about parents. Sometimes, women on Salina joke, that even if a local macho gets married, the mother will be the most important woman in his life. Late marriages can be explained by the difficult divorce suit. This process can take about eight years in Italy. Copyright www.orangesmile.com
Guide to Salina Island sightseeing - things to see and to visit
Salina is the second largest island in the Aeolian archipelago, a world-famous center of fine wines production; caper is another hallmark of the island. The island is interesting for …

Open
The island inhabitants like to attract attention, so they can behave theatrically. You won’t see here an Italian woman in pyjamas, staying in a line for bread. Local women try to take a shopping bag in the same tone as the dress. The principle of bella figure is important for Italians, it is translated as «the beautiful figure». Clothes should always be appropriate for a situation. Locals try to behave like masters of life. That’s why they may seem rude for foreigners. Italians can easily jump the queue. 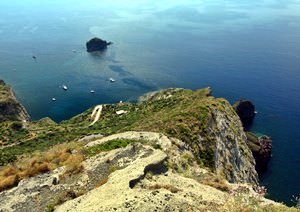 Small streets of Santa Marina are full of nicely-dressed couples, families and single Italians in the evenings. They walk slowly, having small talks and evaluating people. This ritual is a part of an Italian lifestyle and it is called la passegiata. One more Italian characteristic feature is striving for beautiful and expensive things. If the house looks unattractive, it doesn’t mean that its residents are poor. The house can be full of expensive items.
Family holidays with kids in Salina Island. How to entertain your child, things to show to children.
Salina Island is a perfect place, where you can spend holidays with children. The island was inhabited in the Bronze Age. There is a great number of ancient monuments. Wonderful streets and …

Open
Italians are people of a hot temper. They raise voice, use a lot of hand movements, changing their expression. It is customary to apologize, even if you are not guilty, Italians appreciate this behaviour. Italians are very religious and superstitious people. Salina Churches are full of people at Christmas, Easter and Epiphany because customs and traditions are very important for people here.

This guide to cultural sights Salina Island is protected by the copyright law. You can re-publish this content with mandatory attribution: direct and active hyperlink to www.orangesmile.com.
Salina Island - guide chapters 1 2 3 4 5 6 7 8
Reference information
Map of all churches

Cathedrals and basilicas near Salina Island
♥   Cattedrale di S. Bartolomeo, Patti, 48.7 km from the center. On the map

♥   Basilica di S. Maria Assunta, Randazzo, 77 km from the center. On the map

There are 155 UNESCO World Heritage Sites on the territory of Italy. This is more than in any other country in the world. Florence is another unique city in Italy. On its territory are an incredible number of monuments of history and museums. One of the most recognizable buildings of the city is the Cathedral of Santa Maria del Flore, founded in the 13th century. It is in the heart of the city and is its symbol. Another popular attraction of the city is the Basilica of Santa Croce, painted with frescoes of Florentines Giotto, Gadi, and Veneziano. The Uffizi Museum is one of the oldest in Europe. The gallery was founded in the 16th century. It contains thousands of priceless paintings, antique sculptures, tapestries. … Open

Excursions over cultural sights of neighbours of Salina Island

Lipari Island
The local church Castello di Lipari or Citadel is opened to the public. The church is situated in the place of an ancient building. Scientists believe that Citadel consists of fragments of Spanish, Norman and Greek walls. Be sure to walk around this building, which was the last line of defence on the island. The fortress is in good condition and it is a wonderful ... Open »
Messina
A very interesting museum is housed in the Cathedral building and is called the Museo Tesoro del Duomo. It was founded in the cathedral treasury where an interesting collection of valuable items has been collected in the four halls. Here one can see ancient religious items, as well as luxurious gifts that noble residents of the city and its guests once presented to the ... Open »
Calabria
The nearby town of Tropea is an ideal place for those who like to devote time to strolling. Scenic streets with old houses and squares are located everywhere; visitors don’t have to take a tour here to admire unique monuments of architecture. In 1905 Calabria was hit hard by an earthquake, so many historical monuments were destroyed. Tropea is the only city of the region ... Open »
Taormina
Another outstanding 15th-century monument is the Church of St. Augustine (San Agostino Church). The history of its appearance is very symbolic: during the early Middle Ages, the plague struck the city, and soon after its end local residents decided to build a beautiful Gothic church. The building existed in its original form until the beginning of the 18th century. During a ... Open »
Catania
The old chapel and the frescoes of the 18th century are considered the main decorations of the church. There is also a secret room in the cathedral. This room stores the main artifact - a golden statue of St. Agatha. Travellers will find three small churches near the cathedral. All the churches are also dedicated to St. Agatha. Ursino Castle is another unique historical object ... Open »
Sicily
Among religious objects, Cathedral of the Assumption of the Virgin Mary is worth mentioning. It is the burial place of the kings of Sicily. In addition to the sarcophagus, former rulers kept a priceless collection of jewelry in the cathedral; now it can be evaluated by all comers. According to one of the versions, the cathedral was built on the site of prehistoric places of ... Open »

Culture guide to Salina Island. Which fascinating sights to visit once you are in Salina Island: temples, churches, museums, theaters and castles. Recommendations (with addresses, phone numbers and links) on the places 'must visit' in Salina Island. Plan your own city excursion by using this page info!