Detailed hi-res maps of Murcia for download or print 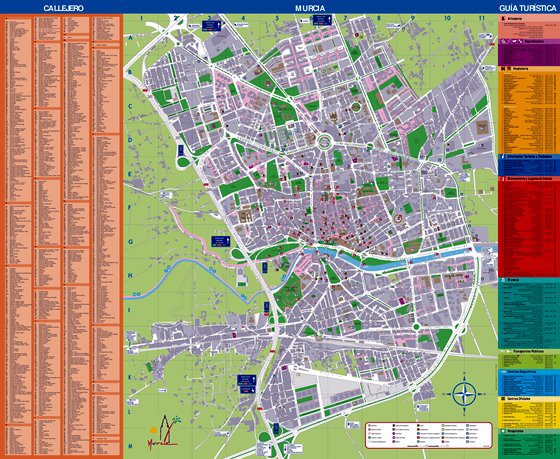 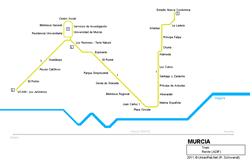 Search for services, infrastructure and sights on map of Murcia

Our guide chapters over Murcia

All fans of sweets should definitely look into the Papabubble Murcia store, selling dozens of different caramel types with a very unusual design. Visitors are offered colorful lollipops, various types of caramel in bulk, as well as gift sets of sweets. The store is located in the same building as the confectionary for everyone to watch how the caramel is made by skilled craftsmen. Women will most certainly … Open

7. The hottest months of the year are July and August. During this period day temperature may reach 40C. Tourists looking for numerous tours, excursions and hiking should better visit the city of Murcia in off-season period. 8. The city is convenient to cruise by underground however underground routes lead far not to all local landmarks. The system of public transport also offers a branched bus … Open

The city has a wonderful oceanarium called Acuario de la Universidad de Murcia with a striking variety of underwater fauna and flora. Moreover, you can significantly broaden your horizons here by learning a lot of new and interesting information about sea and ocean inhabitants. At Almeria Golf Club Hire, tourists missing aristocrates’ favourite game can spend a great time satisfying their desire for the … Open

Festivals and events in Murcia

The middle of July is a great time to acquaint with local culture. At this time, the Festival Internacional de Folklore en el Mediterráneo is held in Murcia. It is dedicated to different cultures. Performers come from all corners of the world to show their dancing, singing, and music skills and culture. The festival is held in the central streets of the city (Plaza del Cardenal Belluga, Plaza de la Cruz, Plaza … Open

Murcia for children - what to visit

Acuario de la Universidad de Murcia aquarium offers visitors a chance to get familiar with mysterious deep-sea creatures. The aquarium is rather small and not crowded, so it’s very convenient to visit even with young children. This aquarium showcases a fascinating collection of exotic animals, including sea horses, jellyfish and amazingly beautiful corals. The aquarium is located on the territory of the … Open

Murcia has many fortifications dating back to the Middle Ages. A striking reminder of those distant times is Monteagudo Castle rising on top of the hill. The very first fortification was built on its site more than a thousand years ago, the castle was constantly expanded and rebuilt. In the 11th century it was converted into a prison, but later returned the status of a defensive structure. The historic building … Open