Detailed hi-res maps of La Palma for download or print 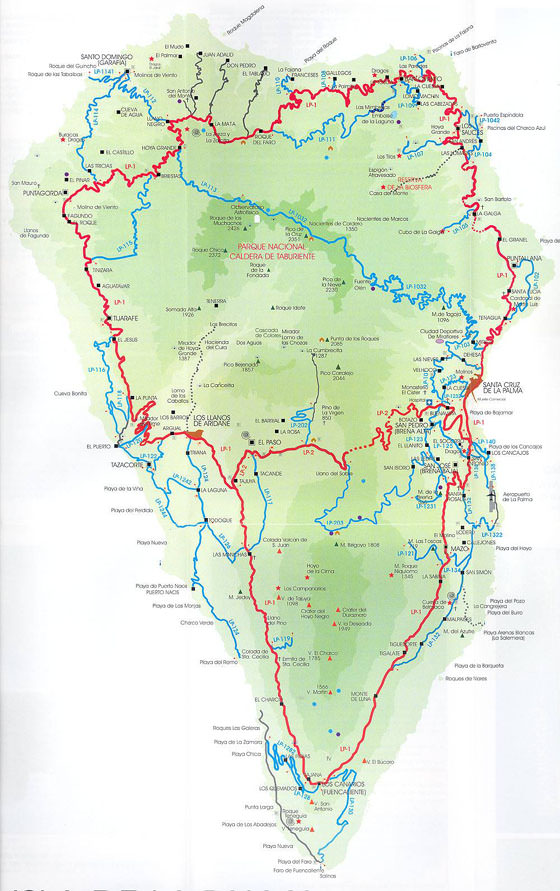 Search for services, infrastructure and sights on map of La Palma

Our guide chapters over La Palma

Locals believe that a big dragon once lived in these places. Its main victims were elephants that inhabited this land, but the biggest and strongest elephant has eventually managed to defeat the monster. When the dragon's blood spilled on the soil, the young trees soon appeared on it. It is believed that the real dragon blood is flowing through their trunks. The islanders ascribe a lot of amazing properties to the … Open

In Garafia, an unusual museum - Parque Cultural La Zarza is located outdoors. It is a very beautiful park, on the territory of which, researchers discovered the most ancient petroglyphs. The park is very unusual. In its territory, there are many centuries-old trees and exotic plants, among which are hidden priceless historical artifacts - stones with the ancient drawings carved on them. A walk through this fabulous … Open

In the capital of the island, you can visit La Molina Artesania, an interesting shop that also features all kinds of national delicacies and souvenirs. Here they sell locally popular cookies in beautiful packages, various canned foods, all sorts of cheese and tea. La Molina Artesania presents a large selection of handicrafts made by local artisans, as well as wonderful wicker baskets, hand-painted mugs, and … Open

4. Those who still expect to take a bus should take into account an important nuance. Even though there is a timetable, not all drivers really care about it. 5. Spanish is widely spoken on the island, locals rarely speak other foreign languages. In hotels and bars, many employees understand English quite well but still prefer to answer in Spanish. 6. Siesta is common among local people. Every day at 1:00 pm … Open