Detailed hi-res maps of Monopoli for download or print 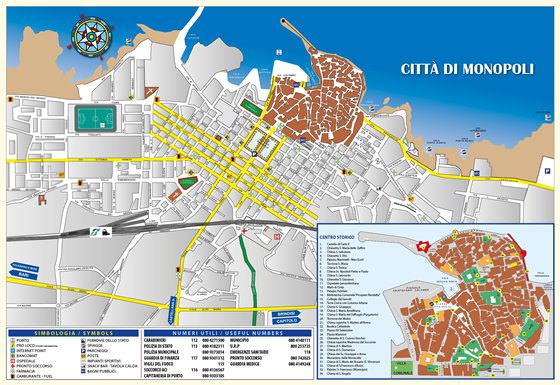 The actual dimensions of the Monopoli map are 2457 X 1689 pixels, file size (in bytes) - 928028. You can open this downloadable and printable map of Monopoli by clicking on the map itself or via this link: Open the map.

City tours, excursions and tickets in Monopoli and surroundings

Search for services, infrastructure and sights on map of Monopoli

Our guide chapters over Monopoli

It is possible to get to Monopoli from Bari. This Italian city has an international airport that receives flights from many European countries and other parts of the world. After that, you need to get on a train to Monopoli. The journey will not be long – only twenty to thirty minutes. Trains to Monopoli from Bari depart every hour. There is another way to get to the gorgeous Italian fairytale town from the … Open

Maps of Bari
Bari's residents are kind-hearted and open. For their qualities, they received the nickname of "Terroni" literally translating as "people of the earth". The locals do not take offense, but rather poke fun at this because only people with an exceptional sense of humor can laugh at themselves. Another feature of local residents is a very respectful attitude to parents, especially ... Open »
Maps of Brindisi
In September, the city hosts an exciting music event, Festival regionale del Talento. As a rule, the event takes place on the third week of the month. This festival attracts new talents, amateur music bands, and even hobbyists. They perform in the city’s venues, on the streets and squares of Brindisi. This event has an incredibly friendly and cordial atmosphere. For ... Open »
Maps of Budva
The city on the Adriatic coast is primarily attractive for its location, and therefore locals have long been accustomed to the influx of tourists. Residents of Montenegro's resort capital are always ready to help, despite being naturally restraint. Their character is somewhat pragmatic, steadfast and straightforward. At the same time, they have a relaxed attitude to life and ... Open »
Maps of Dubrovnik
This festival, about which we are going to speak now, will not leave indifferent each and one sweet tooth and sugar hounds. Did you know that Croats are also known as sweet teeth? And unless somebody will dare to reproach them with it, you should know that they produce the desserts enjoying popularity around the world! Whether more "sweet" festival is possible, then the ... Open »
OrangeSmile.com - online travel reservation expert providing reliable car rental and hotel booking services. We feature more than 25.000 destinations with 12.000 rental offices and 200.000 hotels worldwide.
Secure Server