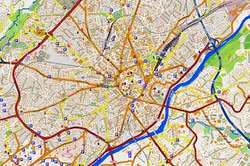 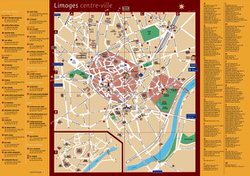 Interactive maps of hiking and biking routes around Limoges

1. You can zoom in/out using your mouse wheel, as well as move the map of Limoges with your mouse.
2. This interactive map presents two modes: 'Biking Routes' and 'Hiking Routes'. Use the '+' button on the map to switch between them.

This Limoges map has two modes: 'Railway Network' and 'Landscape & Rural Map'. Use the '+' button on the map to navigate.

Our guide to Limoges

Initially Limoges was founded by the Romans yet in X century BC. The city’s religion was paganism, but steadily Limoges was turned into Christianity by Saint Martin. This process ended in 250 AD. In the beginning of XIII century Limoges was already a large town, the central part of which consisted of two protective facilities joined by the bridge of Saint Etienne. One part of the facility was the town itself. … Open

Despite the fact that over centuries the city several times had to go through a devastating war, there are numerous notable historical sites. Fascinating Abbey of St. Peter and St. Paul is in a short drive from the city. It was founded in the early 7th century. Later, the abbey was rebuilt several times; part of buildings hasn’t survived to the present day. Next to the Abbey there is a beautiful 12th century … Open

In summer, Bellevue Park becomes one of the favorite spots for locals and tourists alike. It offers beautiful swimming pools, among which there are special ones for children, as well as well-equipped sunbathing terraces. Plenty of free space for active games and walks, playgrounds and rides are available for kids of various ages. The park will appeal to those who like spending time in a relaxed atmosphere enjoying … Open

At a first glance, the Le Versailles restaurant resembles a classic pub. This place has gained popularity among fans of meat dishes. The brand treat is leg of lamb cooked with an addition of herbs and served with a rich vegetable garnish. In the evenings, Le Versailles often has an entertainment program. The Bistrot du boucher restaurant offers visitors a large variety of barbecued dishes. The menu includes creative … Open

Enamel production has flourished until the 18th century, and then gave way to other unique craft, making porcelain. This activity also falls into the category of fire crafts, so it has further strengthened the status of the city. The emergence of crafts was associated with a deposit of special white clay that has been found in the immediate vicinity of Limoges in the second half of the 18th century. Locals … Open

A very interesting landmark is the Botanical Garden, which you can visit for free. Dozens of plant and flower species are represented on its territory. In the warm season, the garden is always adorned with many interesting landscape formations. In the northern part of the garden, is the Center for Arts and Crafts, where you can see crafts by the best local craftsmen. Here you can not only buy excellent souvenirs, but … Open