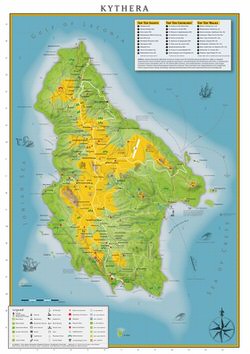 Interactive maps of hiking and biking routes around Kythira Island

1. You can zoom in/out using your mouse wheel, as well as move the map of Kythira Island with your mouse.
2. This interactive map presents two modes: 'Biking Routes' and 'Hiking Routes'. Use the '+' button on the map to switch between them.

This Kythira Island map has two modes: 'Railway Network' and 'Landscape & Rural Map'. Use the '+' button on the map to navigate.

City tours, excursions and tickets in Kythira Island and surroundings

Our guide to Kythira Island

Visitors to Kythira Island can easily combine interesting excursions with beach recreation. It is easy to find a beach for any taste on the island. Fyri Ammos Beach is an incredibly attractive place that is, however, not very easy to get to. Many travelers prefer to use boat services to reach the beach. The land path to the beach is quite long and complicated. This is one of the reasons why the beach is almost never … Open

Those who are not ready to completely abandon the benefits of civilization would like gravel&sand Komponada Beach. It’s situated not far from the capital, so there are not so many vacationers as on the busy beaches of Chora. There is a great tavern that allows you to relax comfortably all day long. The only disadvantage is the wind, as the beach is open. One of the most unusual beaches of the island is located … Open

Those fond of staying in private apartments would like Perlegiannika hotel situated in the picturesque town of the same name. It’s ready to offer two fully equipped villas, which can comfortably accommodate even a large company. Villas built in traditional style feature amazing interior. Everywhere you can see lovely accessories made of natural stone and wood, handmade crafts and fine fabrics. Villas are in … Open

There are amazing cultural venues in Chora, including the Archaeological Museum. It represents precious findings of scientists found over the years of exploring the island. The age of some items is more than two thousand years. The museum's collection is regularly updated with new artifacts. Fans of tours shouldn’t be limited solely by walking through the capital, since it will be interesting to visit the … Open

Maps of Attica Region
We also recommend visiting the club called Wild Rose; its large hall is below street-level which is rather unusual. Life in the city is in full swing all night long. If you want to try your luck, there is even a casino in Athens. Mont Parnes is the nearest casino to Athens, located on the picturesque slopes of Mount Parnassus. Actually, it is an entertainment ... Open »
Maps of Spetses Island
Be sure to walk along the streets of Spetses settlements. The sidewalks are covered with mosaics made of small coloured stones which looks like a scattering of caramels. «Armata» festival is an important event on Spetses. It is held every September and it is dedicated to the battle in the strait between Spetses Island and Kosta during the revolution of 1822. The festival ... Open »
Maps of Kalamata
At the seaside far from the city, there are several large yacht clubs, in which experienced sailors can rent a watercraft, and tourists who simply want to relax can always book a peaceful ride. Curious travelers can always visit such seaside villages as Foinikounta and Stoupa. The first one is primarily a fishing village, and visitors can also try to fish or simply buy the ... Open »
Maps of Chania
On the waterfront of Chania there are lots of exciting nightclubs and bars; they serve visitors until late at night. The Irish pub Conor Pass invites visitors to enjoy beer and friendly atmosphere; there is often an interesting entertainment program in it. Fans of noisy parties and loud music would like the Avalon club. Some restaurants offer entertainment for their guests ... Open »
Maps of Hydra Island
However, you should spend a couple of days walking on Hydra. There are many paths on the island linking settlements with the main attractions. The shortest paths lead to Kastraki, a small coastal castle of the 17th century and the Monastery of Agios Nikolaos. People with different physical training can easily walk on these paths. If you are tough enough, you can go to the ... Open »
Maps of Milos Island
On the coast of Milos, there are a lot of places that you can visit throughout the year. For example, it is worth visiting Sarakiniko Bay with a sandy sea bottom and white stone cliffs and Papafranga Gorge, where the sea, passing through a natural arch, washes a very small beach. Both of these natural objects are known not only for their beauty but also for a rather ... Open »
OrangeSmile.com - online travel reservation expert providing reliable car rental and hotel booking services. We feature more than 25.000 destinations with 12.000 rental offices and 200.000 hotels worldwide.
Secure Server