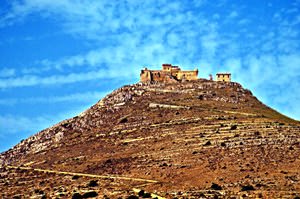 The Aegadian Islands were inhabited in the Neolithic era. Nobody knows exactly people got here, but scientists suggest that the archipelago and the mainland were linked by a strip of land in ancient times. In 241 BC the sea battle unfolded in the local waters. It resulted with the end of the Second Punic war and the victory of Romans. The Roman Empire established its protectorate over the Islands. After the fall of the great power it was ruled by the Goths, Vandals and Saracens, and then Normans came here. Later the archipelago belonged to the Republic of Genoa. Even later, the islands were bought by Ignazio Florio.
Unusual weekend in Aegadian Islands: accommodation in extraordinary hotels
A true leader in the number of hotels is the busy island of Favignana, there you can find a place to accommodate for every taste. Not far from the central square of the capital there is the …

Open
There is a monument to Ignazio Florio near the city council on the main square. He bought the islands in 1876. He took money from the tuna reprocessing factory built by the Florio family in the 17th century. The factory had innovative and modern equipment for those times. The factory itself is a popular tourist attraction on Favignana. There are many mechanisms of past times. Furthermore, different exhibitions are held in the building of the factory.
An amazing castle of Santa Caterina is located on Favignana island. The castle is located on the peak of Mount Santa Caterina. Its peak is 310 meters high and it provides amazing views of the island. The Castle was built in the 10th century by Saracens and it was besieged and destroyed several times. Later, the Saracens left the castle and Normans decided to expand the tower and build a castle. In the 15th century, Andreo Riccio, the ruler of Favignana , rebuilt the fortification again and it acquired the present look. The castle was built using local limestones and its name derives from the small church that Normans rose near the castle to honour Santa Caterina. Scientists believe that the castle was rebuilt from the scratch for several times. Now the fortress is quite well-preserved for its age. During the Bourbon domination, it became a terrible prison for more than 32,000 people. Copyright www.orangesmile.com
Guide to Aegadian Islands sightseeing - things to see and to visit
Egadi archipelago consists of three major islands - Levanzo, Favignana and Marettimo - as well as several beautiful uninhabited islands, which are also available to visit. Egadi Islands are …

Open
World Wars bypassed the Aegadian Islands. The island was abandoned by people and destroyed by the time and weather. You can see not only the preserved rooms and corridors with the remains of antique furniture, doors and windows inside the fortress but also a real military radar which doesn’t function now but it was used by people half a century ago. the Tuna Processing Museum also deserves your attention. There are different interesting exhibits and you will get new information about fishing on the island. People have been making a living by fishing for several centuries on Favignana. 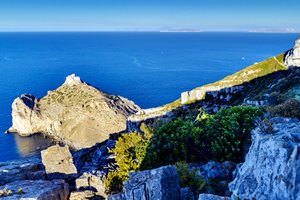 There are several constructions connected to fishing on a small Tonara island. it was a transhipment base for local fishermen for several centuries. They carved and salted fish here. A well preserved old plant of salt production several medieval windmills built more than 2 centuries ago are a good proof of it. However, Levanzo has much more ancient constructions. There is an inhabited village built in the middle ages, fortifications of Normans and Genoese buildings.
Family holidays with kids in Aegadian Islands. How to entertain your child, things to show to children.
The Aegadian Archipelago includes 3 large islands- Levanzo, Favignana, Marettimo and several small uninhabited lands. You won’t find large amusement parks or entertainment centres for …

Open
The most significant landmark on Levanzo is caves of rock inscriptions from the prehistorical period. They are recognized as a national domain of Italy. Grottos on Marettimo are also of great interest. Ancient inscriptions were found here too. Some of the scientists believe that the grottos were inhabited and people performed religious ceremonies inside the grottos. There are ruins of a city built in the period of the height of the Roman Empire close to Marettimo Island. It was quite a large settlement but scientists still explore its buildings and artefacts.

This guide on active recreation and leisure in Aegadian Islands is protected by the copyright law. You can re-publish this content with mandatory attribution: direct and active hyperlink to www.orangesmile.com.
Aegadian Islands - guide chapters 1 2 3 4 5 6 7 8 9

City tours, excursions and tickets in Aegadian Islands and surroundings

Attractions and entertainment in Italy

Another fashionable area for active tourism in Italy is diving. The best places for diving are in Liguria in the waters of the Ligurian Sea, in Sicily, Sardinia, and the Pontiac archipelago. On the coast of Italy, there is no such a diversity of the underwater world, as in tropical countries. Under water however, you can find a huge number of artifacts. Near the coast of Sicily there are wrecks of sunken warships, some ships have been resting on the seabed since the time of the Roman Empire. At the coast of Ustica in Sicily, you can dive into submerged caves and meet with local inhabitants - barracudas, tunas, rays and morays. At the bottom of the banks of the Pontic archipelago, many divers are hoping to find the lost pirate treasure. Very popular diving at Cape Portofino, off the coast of the island of Elba, you can find red corals, squid, jellyfish, sea urchins and scorpions. … Open

Favignana Island
Find some time and visit Cala Rossa. It is considered to be one of the most beautiful beaches in Sicily. It is easy to find the beach. There are many signs on the roads which will help you to find this famous place. Azure-coloured clean water, limestone rocks which protect from the wind and a small number of people make this beach an ideal place for summer holidays. Lido ... Open »
Trapani
In order to buy memorable souvenirs, consider visiting Corso Vittorio Emmanuele as it has the highest concentration of souvenir shops in the city. The street is also famous for numerous clothing shops and trendy boutiques that sell stylish accessories and locally produced perfumes. If you are not the kind of person who returns back to the hotel when it’s getting dark, ... Open »
Palermo
Open air recreation fans will be greatly surprised with numerous parks and gardens scattered all over the city. A beautiful park spreads in close vicinity to the Palazzo dei Normanni. The city of Palermo offers its guests to visit the Orto Botanico di Palermo. The botanical garden will be of great interest to all tourists. The territory of the park is crossed with numerous ... Open »
Ustica Island
The island is close to Asia and it was visited by medieval pirates, that’s why underwater excursions to the sunken ships are very popular on Ustica. Underwater photographers will find captivating things here. You can see a giant sea bass, shoals of glowing salps and Mediterranian barracudas underwater. The most popular diving spots are Secca del Colombara, Grotta dei ... Open »
Agrigento
Are you searching for a place to enjoy a late dinner in a stylish setting? In this case, 120 Lounge Bar is the best choice. This lounge bar has become popular because of a broad range of interesting appetizers and hearty dishes. By the way, this bar sells not only wine and cocktails but also popular beer types. Many people visit this venue to try the best locally produced ... Open »
Sicily
Local Butterfly House (Casa delle farfalle) will appeal to fans of natural landmarks. Small in size, it resembles a real paradise with an abundance of exotic plants and colorful insects. The Butterfly House is located in a large-scale natural reserve, which also features a picturesque cyclamen garden and a special area for recreation. The most popular souvenirs among tourists ... Open »

Guide to your best city break in Aegadian Islands - popular places for recreation and leisure. Things to do during the day in Aegadian Islands - attractions, parks, beaches, aquaparks, racing tracks, biking trails or waterski. Recommendations (with addresses, phone numbers and links) where to spend your time in the evening (bars, discos, clubs, etc.). We share some good ideas and the question 'What to do in Aegadian Islands?' disappears immediately.