Detailed hi-res maps of Gran Canaria for download or print 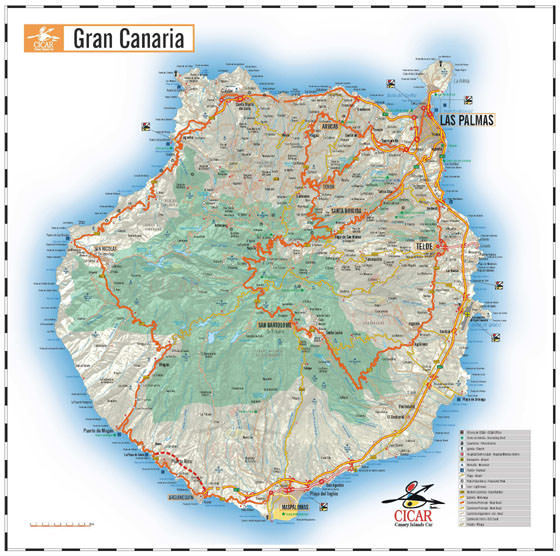 The actual dimensions of the Gran Canaria map are 2367 X 2352 pixels, file size (in bytes) - 724480. You can open this downloadable and printable map of Gran Canaria by clicking on the map itself or via this link: Open the map. 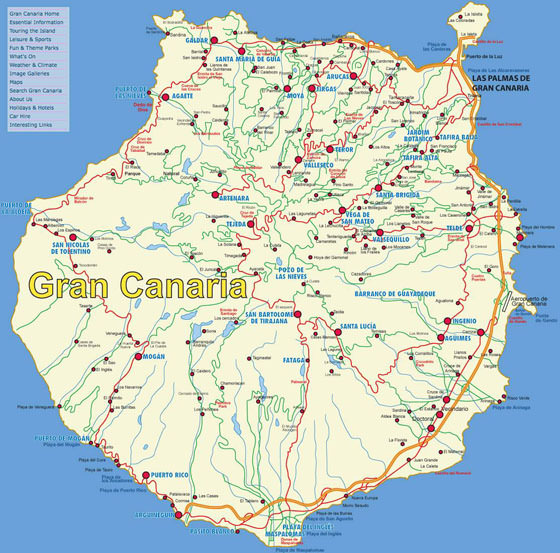 The actual dimensions of the Gran Canaria map are 1114 X 1100 pixels, file size (in bytes) - 228046. You can open, download and print this detailed map of Gran Canaria by clicking on the map itself or via this link: Open the map. 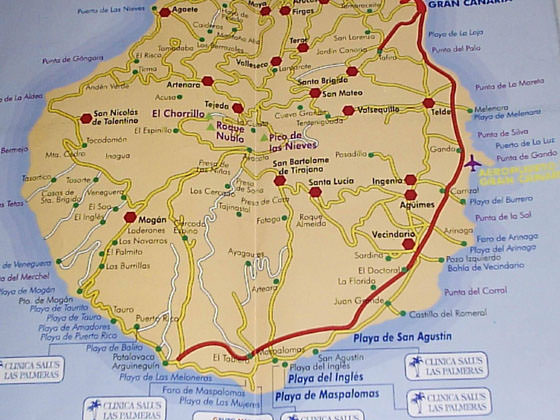 Search for services, infrastructure and sights on map of Gran Canaria

Our guide chapters over Gran Canaria

Gran Canaria's two zoos are ideal for families with kids. Thus, in Palmitos Park you can see dolphin shows, eagles, hawks, monkeys, butterflies, parrots, crocodiles. The second zoo is Camel Park Arteara. As the name suggests, it is dedicated to camels. Here you can take pictures, feed, and stroke them - in other words, all you want to do with the beautiful animals. Also in Gran Canaria there is an aquarium where … Open

Festivals and events in Gran Canaria

An interesting gastronomic event takes place in late April, and its name is Fiestas del Queso. The venue is Santa Maria de Guia. It is dedicated to cheese since the region has long been famous for its production. In addition to tastings and workshops, interesting dance and music programs are prepared for visitors. On December 28th, the so-called Holy Innocents Day is celebrated throughout the Canary Islands - it is … Open

On the territory of a fabulously beautiful orchard in the city of Fataga is situated the mini-hotel Casa Elisa Canarias. This one is known to be in demand among those that love to relax far away from noisy resort areas. The hotel which is outfitted in a beautiful old villa offers three comfortable rooms to its customers. All the rooms were furnished with beautiful antique furniture, and one of them is designed … Open

8. Do not forget to leave tips when you visit local restaurants. The size of tips is usually 5 - 10% of the total order. Even if the service fee is already included in the bill you should still round up the final amount in a big way to any convenient sum. 9. The majority of shops and shopping centers open around 9:00 am and work until 18:00 - 20:00. Large shopping complexes can work until late at … Open

The more secluded beach of Playa de las Burras is situated nearby. It is close to one of the most important natural attractions of the island, the sand dunes of Maspalomas. Fans of relaxing vacation and hiking will enjoy resting here. There are several attractive restaurants and bars on the beach. Playa de Maspalomas embraces vast dunes of white sand contrsting wonderfully with the sky-blue water. This stretch of … Open

Hotels with history of Gran Canaria

The upscale Hotel Rural Las Calas housed in a unique 17th-century building, will also charm lovers of ancient traditions. During numerous reconstructions, it was possible to preserve part of the hotel’s beautiful wood finish, including an exposed wooden beam under the ceiling. Each of the rooms has its own unique feature, from cozy rooms with plastered walls to ones tastefully decorated with antique … Open