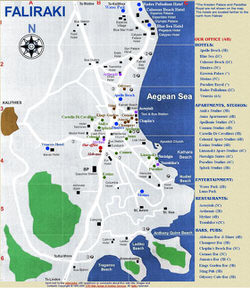 Interactive maps of hiking and biking routes around Faliraki

1. You can zoom in/out using your mouse wheel, as well as move the map of Faliraki with your mouse.
2. This interactive map presents two modes: 'Biking Routes' and 'Hiking Routes'. Use the '+' button on the map to switch between them.

This Faliraki map has two modes: 'Railway Network' and 'Landscape & Rural Map'. Use the '+' button on the map to navigate.

City tours, excursions and tickets in Faliraki and surroundings

Our guide to Faliraki

Few years ago, a water park was opened at the resort of Faliraki. It is now one of the largest not only in Greece but in Europe. The park occupies an area of about 100000 sq. m. and offers a huge choice of water rides. Dozens of slides and pools, attractions for the youngest children and adult fans of extreme sports, spacious terraces and an abundance of living exotic plants - no one will leave this place … Open

8. Those who expect to make calls to other cities and countries are recommended to use street phones or special telephone offices. Calls from the hotel would be the most expensive ones. After 8:00 pm there are discounts on telecommunications services. 7. Those planning to use a taxi have to remember that in the period from midnight to five o'clock in the morning the tariff doubles. In general, taxi tariffs are … Open

Luxurious selection of local dishes is offered by the Golden Beach restaurant. It is located a few steps away from the coast, so the restaurant's main visitors are tourists. There you can relax as a family, try specialties or just spend time in a pleasant atmosphere and enjoy a cold drink at the bar. As for prestigious dining places, the undisputed leader among them is the Nectar. The price level in this restaurant … Open

Among the variety of bars and clubs vacationers point out the Champers pub. It is the perfect place for a great company. In the pub, there is always very fun and relaxed atmosphere and it never ceases to delight guests with refreshments and a variety of interesting themed parties. Shoppers also enjoy the resort, as at every step they can discover interesting gift shops and specialty stores. Those who wish to bring … Open

Maps of Rodos
True shopaholics will love a great choice of bright markets and shopping centers. Hunting furs one should visit the Avanti Furs center meanwhile the largest choice of sport equipment and gears is presented in the Columbia Sportswear center. Among numerous brand boutiques the Diakosavas Store is the most popular one. To hunt some memorable souvenirs tourists should visit the ... Open »
Maps of Marmaris
Those who want to watch sports competitions between football teams should definitely go to Marmaris Şehir Stadyumu and have a good time here. Excellent performances for visitors are held in Talk of the Town bar, everyone who wants to get a great experience of visiting the resort should come here. Another favourite place for tourists and locals is Black Mirror Bar, where you ... Open »
Maps of Tilos Island
There are several beaches with diverse facilities – the largest one is right near the capital – as well as about a dozen of solitary places where you can get to only by water transport. Anyway, if you don’t seek for getting as far from civilized world as possible, a beach nearby Livadhia’s port is a pretty good place too. You would find everything you need there – ... Open »
Maps of Fethiye
One of the most popular and recognizable objects in Fethiye is a beautiful Butterfly Valley. It is a pristine reserve area with an abundance of exotic plants and waterfalls. One can get to this picturesque area exclusively by water, so a tour begins with a fascinating boat trip. The valley owes its name because of hundreds of colorful insects. Among hundreds of species of ... Open »
Maps of Kos
Marmari would be of interest to those who wish to ride a horse and take a couple of interesting photos on the memory of the wonderful time spent on the island. Here there are two equestrian clubs: Salt Lake Stables and Erika's Horse Farm, both worth a visit. Experienced riders are invited to ride a graceful horse along the beach or park, while beginners can make their first ... Open »
Maps of Bodrum
In Osmanli Tersanesi Sanat Galerisi, you can "kill two birds with one stone" - to take a wonderful walk, enjoying magnificent views of the local landscapes, and to visit an exhibition for completely free of charge. This is an ideal place for those looking for an aesthetic pleasure. Mine Sanat Gallery is noteworthy for the fact that besides admiring magnificent examples of ... Open »
Maps of Kos Island
All beauty admirers should visit the Peacock Forest. Hundreds of peacocks live in a beautiful coniferous grove without any cells or cages. Birds have long been accustomed to people and are happy to eat food from their hands, and sometimes even allow to pick themselves up. The photos made here are just beautiful, and one can always take any of the hundreds of feathers ... Open »
OrangeSmile.com - online travel reservation expert providing reliable car rental and hotel booking services. We feature more than 25.000 destinations with 12.000 rental offices and 200.000 hotels worldwide.
Secure Server