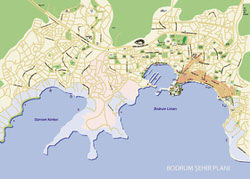 Interactive maps of hiking and biking routes around Bodrum

1. You can zoom in/out using your mouse wheel, as well as move the map of Bodrum with your mouse.
2. This interactive map presents two modes: 'Biking Routes' and 'Hiking Routes'. Use the '+' button on the map to switch between them.

This Bodrum map has two modes: 'Railway Network' and 'Landscape & Rural Map'. Use the '+' button on the map to navigate.

Overview of festivals and celebrations in Turkey

Jereed (Cirit or Gokboru in Turkish) is a traditional sport in Turkey. Local people have played it since the Turkic Khaganate period. Horses have always been sacred and irreplaceable animals for Turks. They were virtually born, raised, fighting, and died on a horse. Turkish people even drank kumis made from mare’s milk. Javelin was the main game of Turkish people during ceremonies and was considered the oldest horse sport in the country. For the first time, Javelin was introduced in Anatolia by Alp Arslan, Sultan of Great Seljuk. The celebration is held every spring. When the game ends, the winner is selected by a council of professional players depending on points won by each team. … Open

Our guide to Bodrum

Hotels with history of Bodrum

The interior of Ha La Bodrum Hotel is distinguished by a more refined and sophisticated atmosphere. The hotel occupies a beautiful Ottoman-style building, its rooms draped with natural fabrics of light shades have elite furniture. In the courtyard of the hotel, there is a wonderful garden with century-old trees decorated with quite unusual landscape elements: ancient clay pots, sculptures made of stone and wooden … Open

5. Local people have great respect towards their traditions and religion, so in no case should you criticize their way of life and question the significance of historical events of the country. 6. Residents of Bodrum are hospitable and welcoming hosts. If new acquaintances or shop sellers invite you to have a cup of coffee, you should accept the invitation with gratitude. Any denial can really hurt … Open

In Osmanli Tersanesi Sanat Galerisi, you can "kill two birds with one stone" - to take a wonderful walk, enjoying magnificent views of the local landscapes, and to visit an exhibition for completely free of charge. This is an ideal place for those looking for an aesthetic pleasure. Mine Sanat Gallery is noteworthy for the fact that besides admiring magnificent examples of fine art, you can also buy the works you … Open

Festivals and events in Bodrum

The end of July is marked by the Gümüşlük International Classical Music Festival. It is held in the ancient city of Mindos located near Bodrum. The musical program includes not only concerts for visitors, but also piano competitions, as well as master classes from the best maestros. In addition to traditional classical works, here you can listen to jazz, which is also a kind of classic. The main highlight of … Open

An incredibly attractive place for spending time together is Bodrum Eos Hotel. Besides stylish rooms designed by renowned modern designers, it offers an extensive adjoining territory with a swimming pool and a garden. Around the pool, you can see beautiful soft furniture and individual tents where you can have a good rest in a secluded setting. There is also a great open-plan bar in the hotel, where visitors can … Open

The largest number of jewelry stores is presented on Barlar Sokagi Street. They will be interesting to both ladies and gentlemen. These stores have a wide choice of accessories and adornments. Each store attracts customers with some exclusive things. Still, on this street, there are shoe shops selling wonderful handmade leather sandals and some pavilions offering locally produced textiles. One of the most … Open