Detailed hi-res maps of Brest for download or print 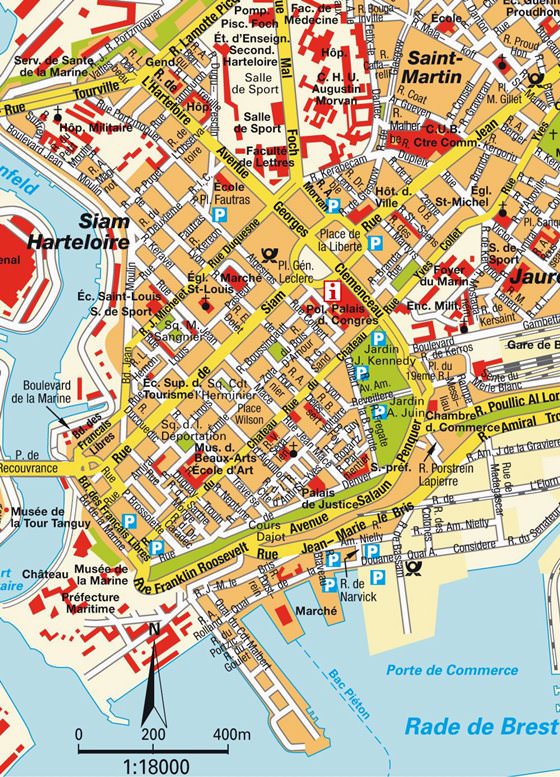 Search for services, infrastructure and sights on map of Brest

Our guide chapters over Brest

Librairie Dialogues can be called the most attractive bookstore in the city. The choice of books in it is simply enormous, including books in English. There is a small cafe on the territory of the store. You can view new books and have a cup of fragrant tea sitting at a table. Besides books, they sell lovely souvenirs. Fans of comics and animated films will be interested in visiting a specialized Excalibulle … Open

5. When going to a dinner in a prestigious restaurant, don’t forget to choose your attire carefully. Visitors wearing too bright, revealing clothes or sportswear may be denied to enter. You shouldn’t also select a table on your own. A waiter will offer guests a place. 6. Visitors of bars should not forget that the price of an order depends not only on the choice of dishes, but also on … Open

We should also note local nightclubs and bars - there are a lot of them in the city, so everyone can find a suitable place to their own taste and budget. The Dubliners welcomes those who prefer to drink the foamy drink in a nice atmosphere of the Irish pub, Blind Piper Pub is interesting with its decor, and Metropolitan will be liked by lovers of excellent cocktails. Another wonderful bar that is sure to please … Open

The middle of October is marked by Atlantique Jazz Festival taking place at Le Quartz Theater. The music festival is attended by many eminent jazz musicians and bluesmen from all over the world, and thanks to such a rich cultural program, the musical event is considered one of the most popular in the whole of Europe, therefore many tourists are eager to visit it. Besides spectacular music shows, all kinds of … Open