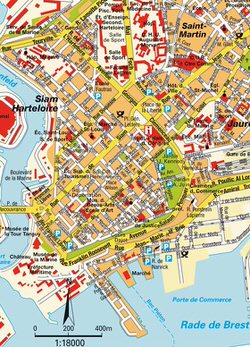 Interactive maps of hiking and biking routes around Brest

1. You can zoom in/out using your mouse wheel, as well as move the map of Brest with your mouse.
2. This interactive map presents two modes: 'Biking Routes' and 'Hiking Routes'. Use the '+' button on the map to switch between them.

This Brest map has two modes: 'Railway Network' and 'Landscape & Rural Map'. Use the '+' button on the map to navigate.

Our guide to Brest

In early August, fans of quality music gather at Parc Naturel Régional d'Armorique located near Brest for the sole sake of visiting Festival du Bout du Monde. People can listen to different music genres here, so everyone will have a chance to find music to his/her liking. The event is in the open air, and therefore campers gather here to spend time together. The event attracts many tourists, because it is … Open

Other museums are no less remarkable. Fort de Montbarey is another place where fans of military history feel at home. A large number of military vehicles from the Second World War are displayed here. Abri Sadi Carnot is a shelter, which is associated with the tragedy that occurred during the World War II. And you will definitely hear something interesting about it from local guides. Connoisseurs of fine art gather … Open

7. Food is better to be purchased in remote areas of the city. The cost of food in supermarkets in the central part of the city is much higher. 8. Fans of shopping should pay attention to the shops, which are marked with the «degriffes» sign. This means that these trading pavilions offer sale items from the previous season. Here you can purchase quality clothing and shoes at a deep discount. … Open

Tea and coffee drinkers should definitely come by miniature Tôt Ou Tard shop in Brest. The shop is quite small, however, it presents dozens of kinds of tea and coffee, as well as accessories for making and enjoying these drinks. Here, you can purchase luxury tea-storage jars, hot mugs, as well as other irreplaceable accessories for hot drinks. E.Leclerc Brest trading center is famous for lots of attractive … Open